Listen to Jennifer Michael Hecht read her poem “A Marriage of Love and Independence” from her new collection, “Who Said.”

A Marriage of Love and Independence

When in disgrace with Frotune and men’s eyes
When in the Course of human events, it becomes
I all alone beweep my outcast state necessary
for one people to dissolve the political bands
and trouble deaf heaven with my bootless cries,
which have connected them with another, and to assume
and look upon myself and curse my fate
among the powers of the earth, wishing me like to one
more rich in hope, the equal station to which the Laws
featured like him, like him with friends possessed,
of Nature entitle them,

with what I most enjoy contented least;
we, therefore, these thoughts myself almost despising,
for the rectitude of our intentions, do,
haply I think on thee, and then my state
by Authority of the good People of these Colonies
(like to the lark at break of day arising
solemnly declare, That these United Colonies
from sullen earth) sings hymns at heaven’s gate;
are, and of Right out to be Free and Independent States;
for they sweet love rememb’red such wealth brings
that then I scorn, and change my state with kings. 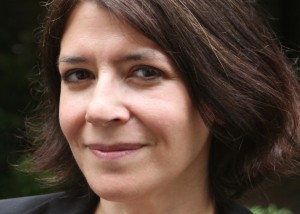 “Who Said” is Jennifer Michael Hecht’s third book of poetry. “The Next Ancient World,” her debut collection, won three awards, including the Poetry Society of America’s Norma Farber First Book Award. Hecht is also a philospher, historian and commentator. Her books include the bestseller “Doubt: A History” and “The End of the Soul: Scientific Modernity, Atheism, and Anthropology,” which won Phi Beta Kappa’s 2004 Ralph Waldo Emerson Award. Her writings have been published in Politico, The New York Times, The Washington Post, The Boston Globe and The New Yorker. She lives in Brooklyn and teaches at The New School.