Weekly Poem: Laura Kasischke points to the lingering past 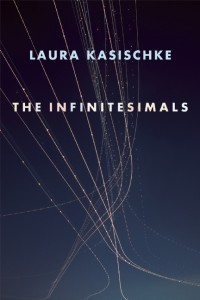 “I take the material from memory and things that have been lost and people who are gone and the past, but I’m trying to give it life again,” said Kasischke.

Kasischke bases many of her poems on real objects or experiences in her life, but says that writing is an outlet for her to untangle more elusive issues.

“The act of initially sitting down to write the poem is where I’m figuring out something about the world that isn’t tangible or rational or right in front of me.”

“I guess for me the origins of the poem [“The Common Cold”] was pretty sensory, just this idea being biological and viral and physical and the experience of having a bit of a fever and being in a crowd,” Said Kasischke. “In that moment, I felt connected to motherhood and athleticism and being with other parents and this sense of time passing.”

Listen to Laura Kasischke read “The Common Cold” from her new collection “The Infinitesimals.”

To me she arrives this morning
dressed in some
man’s homely, soft, cast-off
lover’s shawl, and some
woman’s memory of a third-
grade teacher
who loved her students a little too much.
(Those warm hugs that went
on and on and on.)

She puts her hand to my head and says,
“Laura, you should go back to bed.”

But I have lunches to pack, socks
on the floor, while
the dust settles on
the I’ve got to clean this pigsty up.
(Rain at a bus stop.
Laundry in a closet.)

And tonight, I’m
the Athletic Booster mother
whether I feel like it or not, weakly

taking your dollar
from inside my concession stand:

I offer you your caramel corn. ( Birdsong
in a terrarium. Some wavering distant
planet reflected in a puddle.)

And, as your dollar
passes between us, perhaps
you will recall
how, years ago, we
flirted over some impossible
Cub Scout project.
Hammers

and saws, and seven
small boys tossing
humid marshmallows
at one another. And now

those sons, taller
and faster than we are, see
how they are poised on a line, ready
to run at the firing of a gun?

But here we are again, you and I, the
two of us tangled up
and biological: I’ve

forgotten your name, and
you never knew mine, but
in the morning
you’ll find

my damp kisses all over your pillows,
my clammy flowers
blooming in you cellar,
my spring grass
dewed with mucus-

and you’ll remember me
and how, tonight, wearing my
Go Dawgs T-shirt, I

stood at the center
of this sweet clinging heat
of a concession stand
with my flushed cheeks, and

how, before we touched, I
coughed into my hand.
Look:

here we are together
in bed all day again.

Her poem “The Invisible Passenger” came from an experience of boarding a plane. Looking for her place in row 12, she noticed there was no row 13 between her and row 14.

“Was it bad luck and no one wanted to sit there? Or was it because those flying us through the air are superstitious themselves? There’s something so irrational about moving through this world and trying every day, whether by using our seat belts or not sitting in unlucky rows, to defy death again.”

Listen to Laura Kasischke read “The Invisible Passenger” from her new collection “The Infinitesimals.”

engineering feat of
gravity and wings, which
flies on superstition, irrationality. The calm

has been printed on my ticket:

Doe and fawn
in a grove below us, her
soul crawling in an out of my clothes.

While, in a roofless theater, a magic act
is performed for children
by an invisible man.

of a cake that I once
baked for my father—

And, my father’s dentures, lost
(all his teeth
pulled out
as a young man
by a military dentist im-
patient to send him
on his way), and

The poetry in “The Infinitesimals” invites the reader to look into their own past and think for a bit on what it is to experience loss.

“I can’t see them, and they’re over, and people are gone, but they’re not zero, they’re too small to be measured or too lost and invisible to be found again, but they’re still there, because they were there.”