Before we say anything else I’d like
to point out that this coverage
is favorable to the user. I mean
I’m already a fan so I trust
the instructions, which seem
to tell us to reject a strutting self.
I’m able to choose that too.

Am I wrong or did the user leave
us lots of little choices. If we’re
being led in wrong directions
in service of larger truths,
so be it: I will happily call a whole
school of red herrings my family

Soon enough something pulls
me back to a photo of myself.
I don’t remember who took it,
but it implies a phantom twin,
the kind of presence you reach
out to when you die.
Autobiography is still
the sincerest form of flattery.

There were things I couldn’t say
before because I knew the group
would agree, one of which is that
I’m quite sure I’ve uncovered
the source of this terrible light,
not quite lethal, but the user
has given us a permission again,
and no matter how compelling
the light might be it has some
serious potential to degrade us.

In the end it’s one of the user’s
favorite solutions–water to water
to water to sex–but I don’t mind
in the way I never do. He’s drawn
a bath for everyone, and it’s almost
as thought I’m no longer afraid
there wont be enough room 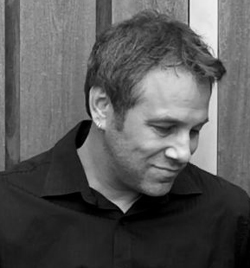 “They Don’t Kill You Because They’re Hungry, They Kill You Because They’re Full” was published in March 2014. Mark Bibbons‘ other collections include “The Dance of No Hard Feelings” and “Sky Lounge,” for which he received a Lamba Literary Award. His poems have also appeared in in Poetry, The Paris Review, Boston Review, Tin House, and The Best America Poetry. In 2005, he was awarded a Poetry Fellowship from the New York Foundation for the Arts. Bibbons currently reaches in the graduate writing program at Columbia University and at The New School, where he co-founded LIT magazine.