Poetry Mar 10, 2014 1:05 PM EDT
Grandmother with Mink Stole, Sky Harbor Airport, Phoenix, Arizona, 1959It rode on her shoulders
flayed in its purposes of warmth and glamour.Its head like a small dog’s and its eyes
more sympathetic than my mother’s eyes’ kindnesswhich was vast. Four paws for good luck
but also tiny sandbags of mortification and ballast,

and in the black claws a hint of brooch or clasp.
Secured like that head could loll and the teeth

in the snout’s fixed grin was the clenched “Oh, Shit!”
of road kill askew in the gutter. This she wore

no matter the weather and always, always,
when she stepped from the plane and paused,

at the top of the rolling stairs, she fit her hand
to her brow against the glare of concrete and desert,

not a white glove’s soft salute but a visor
that brought us into focus. Mother and Father waving first,

then oldest to youngest, dressed in our Easter best,
we were prodded to greet her, she who gripped the hot,

gleaming rail, set her teeth in the mink’s stiff grin,
and walked through the waterless, smokeless mirage between us.

She who wore the pelt, the helmet of blue hair
and came to us mint and camphor-scented, more strange

than her unvisited world of trees and seasons,
offering us two mouths, two sets of lips, two expressions:

the large averted one we were meant to kiss and the other
small, pleading, that if we had the choice, we might choose. 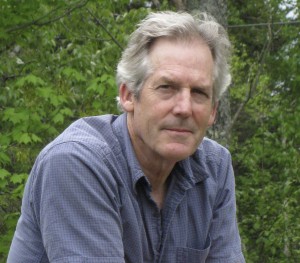 Michael Collier was the Poet Laureate of Maryland from 2001-2004. He has published several collections of poetry, including “The Ledge,” which was a finalist for the Los Angeles Times Book Prize and the national Book Critics Circle Award. “An Individual History,” published July 2012, is his latest collection of poems. Collier is a professor at the University of Maryland, College Park, and is the director of the Bread Loaf Writer’s Conference.