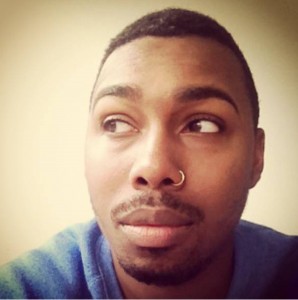 On the edge of a humble, nameless town, a young boy’s father catches him in women’s lingerie. The man rages, beats his son and burns his clothes. All the while, a Nina Simone record spins.

Crafted over the course of nearly five years, the book narrates the development of a figure referred to as Boy. Initially, Jones says, he was “just writing poems,” first as an MFA student at Rutgers University-Newark, then rising before dawn to squeeze in drafts before teaching his high school classes. He wrote while he traveled — scrawling pages from a beach in Indonesia — and he wrote from the depths of his grief after his mother died unexpectedly.

“I was very much on my own journey as I was writing about Boy’s,” he says. “The process of both time and just being in a lot of different places and settings in my own life, that really was important to how the book was formed.”

Boy as a character emerged only partway through this process, serving to unify recurring ideas, voices and experiences. From there, the vague shape of a book began to emerge.

“You have that very odd morning in which you’re sitting on the floor of your apartment and you have 80 pages of poems printed out,” Jones laughs. “You’re looking and trying to arrange them into some kind of logic.”

The result of that arrangement is a loosely-chronological coming-of-age story, rooted sometimes in Jones’ own life. Poems, like “Mercy,” see Boy craving his mother, reflecting the period after Jones lost his own. The setting is often Southern, a landscape known intimately by the Memphis-born, Texas-raised, Kentucky-educated poet.

“Skin Like Brick Dust,” a poem about Boy, a lover and a Harlem dawn, is close to autobiographical. It also critical to the book’s movement, because we “need to see [Boy] become a man, and part of becoming a man is … learning the limitations of sex and of love,” Jones says.

At the same time, while “Boy in some ways is very similar to me … his life is not my life,” Jones says.

The book is also “trying to mythologize this coming-of-age story,” refracting experiences and memories of being a young, gay man of color in rural, Southern communities, through sometimes magical, sometimes impossible, scenarios. When Boy leaves home in “Boy At Threshold,” he does so in the arms of the wind, for example, and mythical and biblical allusion pepper other poems.

“I felt that it didn’t have to be so realistic because so many people are able to pick up on the reality, and so we can kind of focus on the internal life,” Jones says.

That internal life allows Jones to explore a variety of themes, beginning with the complexity of the very word boy. The word “was a cut diamond with all of these facets,” says Jones. “It alludes to childhood, it alludes to the relationship between boys and men, and fathers and sons. It’s often a racial epithet,” and the word is also used in the context of certain sexual fetishes.

“Boy was really a character I created so that we could go on a journey and look at all of those facets without the book feeling like a dictionary entry or something,” he says.

The book’s titular poem, which depicts a moment of sexual humiliation and violence, compounds this word with others that start with B, “turning it and turning it,” says Jones, “and it’s kind of hypnotizing, which I think makes the subject matter all the more disturbing, because it’s kind of jazz-like while it’s kind of describing something that’s really horrible.”

That horror is the point, says Jones, and created in part by the absence of Boy’s voice.

“I think often when we talk about brutality and violence … we often hear from the survivors,” says Jones, “but sometimes I think we also need to hear the horror itself.”

Listen to Saeed Jones read “Prelude to Bruise” from his debut collection of the same name.

In Birmingham, said the burly man—

Boy, be
a bootblack.

See this burnished
brown leather belt?
You see it, boy?

Are you broke, or broken?
I’m gonna break your back in.

(or I’ll bend you over my lap–rap rap)

butt out, tongue out,
lean in.

My boot, black.
Your back, blue-black.

The related language of sex and violence can be dehumanizing, and shows how isolating sexual experiences can be, Jones says. “Often shame and isolation are an unfortunate part of our experience of experiencing sex, because we don’t feel comfortable talking about it, so we often find ourselves in risky situations where the dynamic may turn out to be totally awful.”

Jones returns to the idea of isolation despite intimacy in other poems, such as “Body & Kentucky Bourbon,” another semi-autobiographical piece. It reads like a candid conversation with a partner, and Jones says he was trying to express to a college boyfriend that which was left unsaid during their relationship.

“What is literally more intimate than sex? You’re physically against another human body,” Jones says. “And yet at the same time, there is an internal life, and there’s a past that we don’t always have access to.”

None of us are uniquely traveling down life’s path, Jones realized, perhaps obviously, “but I do think when you are struggling yourself and just trying to survive, really, you can often forget that you are also alongside other people who are struggling and trying to figure their lives out as well.”

Writing out Boy’s story for “Prelude to Bruise” did not merely humanize one character. By fleshing out the figures alongside and around Boy — his parents, his partners, his adversaries — Jones crystallized his own poetic coming-of-age.

Listen to Saeed Jones read “Boy in a Whalebone Corset” from his debut collection, “Prelude to Bruise.”

Boy in a Whalebone Corset

The acre of grass is a sleeping
swarm of locusts, and in the house
beside it, tears too are mistaken.
thin streams of kerosene
when night throws itself against
the wall, when Nina Simone sings
in the next room without her body
and I’m against the wall, bruised
but out of mine: dream-headed
with my corset still on, stays
slightly less tight, bones against
bones, broken glass on the floor,
dance steps for a waltz
with no partner. Father in my room
looking for more sissy clothes
to burn. Something pink in his fist,
negligee, lace, fishnet, whore.
His son’s a whore this last night
of Sodom. And the record skips
and skips and skips. Corset still on,
nothing else, I’m at the window;
he’s in the field, gasoline jug,
hand full of matches, night made
of locusts, column of smoke
mistaken for Old Testament God.

“Preclude to Bruise” and “Boy in a Whalebone Corset” are reprinted by permission from Prelude to Bruise (Coffee House Press, 2014). Copyright © 2014 by Saeed Jones.