A poet looks to his own family to understand forgiveness

Listen to Thomas Dooley read “Aunt Peggy” from his debut collection, “Trespass.” When Dooley was writing this poem, he was preoccupied with understanding forgiveness. “What is a therapeutic response to something? It’s such a personal thing,” Dooley told Art Beat in December. The poem is “trying to figure out, how does one go on when something has happened? And maybe a way to go on is to not go on with a certain person. Maybe that is how you can save your life.”

Afternoon sun on metals, hubcaps
flash on Second Avenue, I’ve been
seesawing my feet on the edge of the curb
for almost an hour on the phone
with my mother, It just doesn’t make
sense, the subject always comes up,
I mean she’s had years
of therapy, she says years with such
exhalation her breath gets
reedy, I pick threads from my scarf,
Why can’t Peggy forgive your father? The city is
bright, winter is quiet, a pause
on motion, Mom, look at all she’s been through, Pop
then Dad, I mean, good god, her voice
tenders, But Tom, she ticks her throat,
don’t you think after all that therapy
she would be able to forgive? I can feel
a draft in my sleeve, it hits
the sweat at the bend of my arm, Maybe this is
her therapy. Treat Dad like he’s dead.
There is a shallow dent in the chrome
fender of an old car my image runs over
and warps, my mother is quiet,
I’ve handed her something new, she might
stand for a while in her kitchen and wait
for the dishwasher to end its cycle. 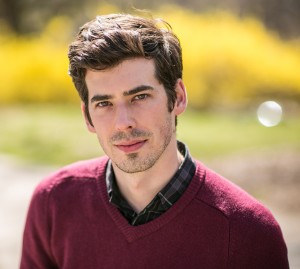 “Trespass” is Thomas Dooley‘s debut collection of poetry. The book was selected by poet and novelist Charlie Smith for the 2013 National Poetry Series. Dooley is the founder and artistic director of Emotive Fruition, an experimental theater collective where actors and poets work together to perform written poetry. He earned an MFA from New York University, has received fellowships from New York University and the Jentel and Starlight Foundations, and lives in Brooklyn, New York.