W.S. Di Piero reads “The Smell of Spearmint” from his collection “Tombo.”

The Smell of Spearmint

He told, he didn’t suggest or ask.
So when the unfinished father
told the son to do it, the son obeyed
and laid out razor and Barbasol
next to the bed-tray’s plastic cups,
ashtray, straws, and mucilage
of scrambled eggs. Forty-three,
he demanded to look clean and spare.
We die with habits of self-regard.
The son, seventeen, can’t know
that when he’s his father’s age,
a life’s love would soap his face,
run the blade, nick a nostril
—hold still, you nervous you—
then pass into time’s menthol airs.
He trowels, plumps, pats the lather,
he turns the head, he drags the trucky
brutish double-blade down
jaw and hallowed cheeks:
it planes the meaty manly whiskers,
it resists its task, yet life feels lighter
in his hand, most of all when it lies
lightly on the cabled throat.
One big bone, the father’s head,
in custody of the speechless son,
the untrained hand that never knew
the contents of that bone, does what
it’s told to do and can’t know
what love will bring back in time. 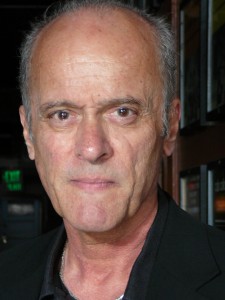 W. S. Di Piero is a poet, essayist, art critic and translator. He is the author of 10 books of poetry including “The First Hour,” “Skirts and Slacks” and “Nitro Nights.” “Tombo” is his most recent collection of poems. The winner of the 2012 Ruth Lilly Poetry Prize, Di Piero has published poems in “Poetry” and “Threepenny Review.” He writes a monthly column on visual arts for the San Diego Reader, an independent newsweekly and has published five collections of his essays, including “When Can I See you Again?” Di Piero is the winner of a Guggenheim Foundation fellowship, an Ingram Merrill Foundation fellowship and a Lila Wallace-Reader’s Digest Fund fellowship.