When you turn 29, ‘metamorphosis is not optional,’ this poet says

For poet Hala Alyan, year 29 was one of necessary endings — saying goodbye to her 20s, her time as a student, her life as a single woman — and big beginnings — a new home, marriage to her husband. The upheaval left Alyan feeling displaced and more fragmented than ever before.

“Existing in that emotional borderland really kicked up thoughts about a lot of other ‘borderlands’ I’d lived through,” Alyan remembered. She says it was a time in her life when she could no longer avoid processing all of the experiences that had brought her to that point.

“They tried to warn me, but I still went into 29 kicking and screaming.”

The result of that poignant reflection was “The Twenty-Ninth Year,” a poetry and prose collection exploring Alyan’s nomadic past fleeing the Gulf War and upheaval in the Middle East, and her future as a Palestinian-American woman, a poet, a clinical psychologist and a newlywed.

“Everyone who was older than me said 29 is a year of fragmentation,” Alyan remembered. “They tried to warn me, but I still went into 29 kicking and screaming.”

That fitfulness echoes throughout Alyan’s work as she dismantles her own long-held beliefs about her childhood spent crisscrossing the globe after her family left Kuwait in 1990. In the poem “Armadillo,” Alyan details her family’s chaotic migration bouncing from state to state in America, with sojourns in the Middle East.

Flashbulb memories of her mother’s tears, her brother’s drinking, her father’s love, and her sister’s birth reveal how, though location may change, pain endures. She ends the poem with the line, “What do we do with heartache? We tow it.”

At age 29, she says she began to wonder: What do we carry across generations? Specifically, she thought about how the weight of womanhood shifts throughout our lives.

In “Nineteen in Retrograde,” she explores her teenage self, first love and the sudden sexualization of the female body (“Here razorblade, here fishnet, strutting down Hamra in heels and a black coat”).

“This poem is definitely me reclaiming history,” Alyan said. “I took memories I had, or memories my cousin or grandmother had, and reimagined them. I played around with fear and rewrote endings so I could heal.”

This process was therapeutic for Alyan, allowing her to mine her ancestry for truths about the female experience and how women relate to men. In “Wife in Reverse,” she writes:

You like to hear about the women in my family. They burn dinner. They divorce and suck their stomach in. They love red coats and expensive perfume and, when winter light fills the streets in that final, lonesome way, they will walk into a stranger’s life and make it their own.

If a girl doesn’t have land, then man becomes land.

In completing “The Twenty Ninth Year” and turning 30, Alyan felt buoyed by the power of female resilience and her own ability to confront truths she had previously avoided.

“You will transform,” Alyan said. “Metamorphosis is not optional.”

The Female of the Species

They leave the country with gasping babies and suitcases
Full of spices and cassettes. In airports,

They line themselves up like wine bottles.
The new city twinkles beneath an onion moon,

If I drink, I tell stories about the women I know.
They break dinner plates. They marry impulsively.

When I was a child I watched my aunt throw a halo
Of spaghetti at my mother. Now I’m older than they were

In an old-new year, my cousin shouts ana bint Beirut
at the sleeping houses. She clatters up the stairs

I never remember to tell her anything. Not the dream
where I can’t yell loud enough for her to stop running.
And the train comes. And the amar layers the stones
like lichen. How the best night of my life was the one

She danced with me in PAris, sharing a hostel bed,
and how sometimes you need one knife to carve another

It’s raining in two cities at once. The Vendôme Plaza
fills with water and the dream, the fountain, the moon

Explodes open, so that Layal, Beirut’s last daughter
can walk through the exit wound. 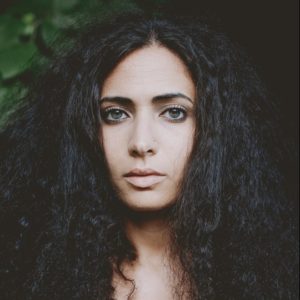 Hala Alyan is an award-winning Palestinian American poet, novelist and clinical psychologist whose work has appeared in numerous journals including The Missouri Review, Prairie Schooner and Colorado Review. She resides in Brooklyn with her husband.

Left: At age 29, Hala Alyan says she began to wonder: What do we carry across generations? Photo by 8tracks creative commons