Listen to Wo Chan read the poem “My Mother’s Bra.” 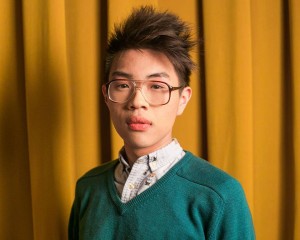 The first thing Wo Chan ever wanted to be was a magician. Now a poet, Wo, who prefers the pronoun “they,” uses language to make other transformations, bringing marginalized voices to the forefront in a society that has oppressed them.

As a queer immigrant who is facing a legal battle over deportation, Wo said they see poetry as a tool of fighting the oppression they have experienced.

“I’m expected to be quiet and avoid trouble,” Wo said. “And what I feel more compelled to do is to go to protests and speak out, and write poems about state brutality, state violence, write poems about the structures that have masked large amounts of wealth and power.”

Wo’s work has recently explored what they describe as “rage” at the power imbalances that exist in the U.S. For Wo, the process of experimenting with language also challenges the systems that create those imbalances.

“Poetry is this great tool of disruption for monolithic power,” Wo said. “Language is what we see the world through [and] poetry gets right to the core of it.”

That inequity is also present in literary communities, where some contests have reading fees or citizenship requirements that create barriers to entry, Wo said. This can disproportionately affect marginalized groups in a sphere where they are already underrepresented, they said.

As an art form that addresses the intersection of many identities, poetry can also help create solidarity, Wo said.

“I think poetry begs for honesty, and it begs for the authentic personal self, and that’s a self that isn’t chopped up and isn’t compartmentalized,” Wo said. “If I’m going to write honestly, there is no other way than to write from a point of intersectionality.”

Limp, coarse, and unpadded, my mother wore
the same bra for years; years I watched it fade,
white cotton lace stained cream gray in a frame
that refused to fold. She never bought more.

The first time I slipped it on I was eight.
I burst into the kitchen, mischievous
as I was, and her face curled in disgust.
She yelled. I watched my breasts evaporate.

Last week I bought my first bra. Clearance, black,
and doubled padded: an extra-long clasp
for a child with a ribcage built like a ship’s.
My lips (though we don’t talk) are hers, thick,

thicker even. How could she detest me?
Look at us. Look. Us together. Sexy.

Wo Chan graduated from the University of Virginia’s Area Program for Poetry Writing and is a 2015 Asian American Writers’ Workshop Margins Fellow.