The year 1991, journalist Kelley L. Carter argued Tuesday before an audience of 1,000 in Washington D.C., was the best and worst year ever for black America.

It was the year of Jamie Foxx in “Living Color,” of Michael Jordan’s first appearance in an NBA final, of an explosion of rap and hip hop and Michael Jackson. Images of Foxx and Jordan flashed on a giant screen as she spoke; Jackson’s album “Dangerous” played underneath her. It was also the year of the Rodney King beating, the Clarence Thomas nomination, and the arrest of Mike Tyson for rape. As images of those men appeared, Carter dropped her light-hearted, irreverent tone in favor of something more like a spoken word poet. It was the year, she said, that white people had to wrangle with “how to evaluate the acts of black men.” By the end of her essay, as the screen went dark, the audience applauded loudly — some wondering how they could have missed how much had happened that year .

Carter’s performance was part of Pop Up Magazine, a touring, performative, live magazine experience that showcases the work of journalists, filmmakers, photographers and other storytellers. The magazine began in 2009 in San Francisco as a sort of experiment. Could a series of shows, structured like a magazine and performed live by journalists, pack performance halls across the country?

It turns out it could. It’s filled auditoriums and theaters in Los Angeles, San Francisco, and New York, among other places. A physical magazine, California Sunday, has also grown out of the show.

On Tuesday night, at D.C.’s Lincoln Theater, Pop Up Magazine opened with a radio journalist’s audio tale of the hilarious voicemails left for liquor company customer service lines by intoxicated callers (voicemails, it turns out, that are almost never complaints). It closed with the story of a former Broadway singer who had become homeless and was trying to get past addiction — and then with that singer appearing on stage to belt out “The Man of La Mancha’s” “Impossible Dream,” to a standing ovation.

It was the live magazine’s first appearance in the city, and over the course of the 100 minute performance, it veered from constitutional law to pop culture, from explainers to advice columns, from true love to true crime. It was live, curated storytelling, but it was not The Moth, because it hung not on the extraordinary stories of ordinary people, but on the reported work of journalists, many at the top of their game. Journalists like science writer Laurel Braitman, who on Tuesday night performed a piece called “Dirty Birds,” in which she recounted a reporting trip to the Aleutian Islands to study the bald eagles that lived there. What she found was that the real-life bird was wild, feral, mostly disliked by locals, and possibly “of bad moral character.” “Is it possible to respect a national symbol once you get to know them?” she asked.

Like any good magazine, Pop Up Magazine asks you to think. And like any magazine with a prayer for the future, it pushes the boundaries of format: telling stories not only through words but also photos, video, animation, illustration — even a live score from an onstage orchestra.

For the jaded, the busy, or the distracted, Pop Up Magazine also forces you to pay attention. In part, this is because the show is put on, and then disappears. The show is not filmed. It is not made available online. Like the ephemeral nature of — it must be said — the structures of the Burning Man Festival, the magazine is meant to pop up, hold you for awhile, and then vanish, so that it has your full engagement in that moment. Douglas McGray, the California-based journalist who co-created Pop Up Magazine and also serves as editor-in-chief of California Sunday, said this was the intention from the beginning.

Throughout the show, almost no one in the audience seemed to use their phones. The exception was when several ads played — this was, it must be remembered, a magazine. But the moment the ads were over, phones were re-stashed, and people leaned forward in their chairs, entranced again. It felt like a publication meant to be consumed at night, which McGray also said was intentional.

Instead of fighting for people’s attention to good journalism during their workday, he said, he wanted people to be free to relax, listen, savor. It brought to mind for me an essay I’d once read about the sights and sounds of Grand Central Station, where in the morning, people were harried, unseeing, but at night, they were loose and open to the world. 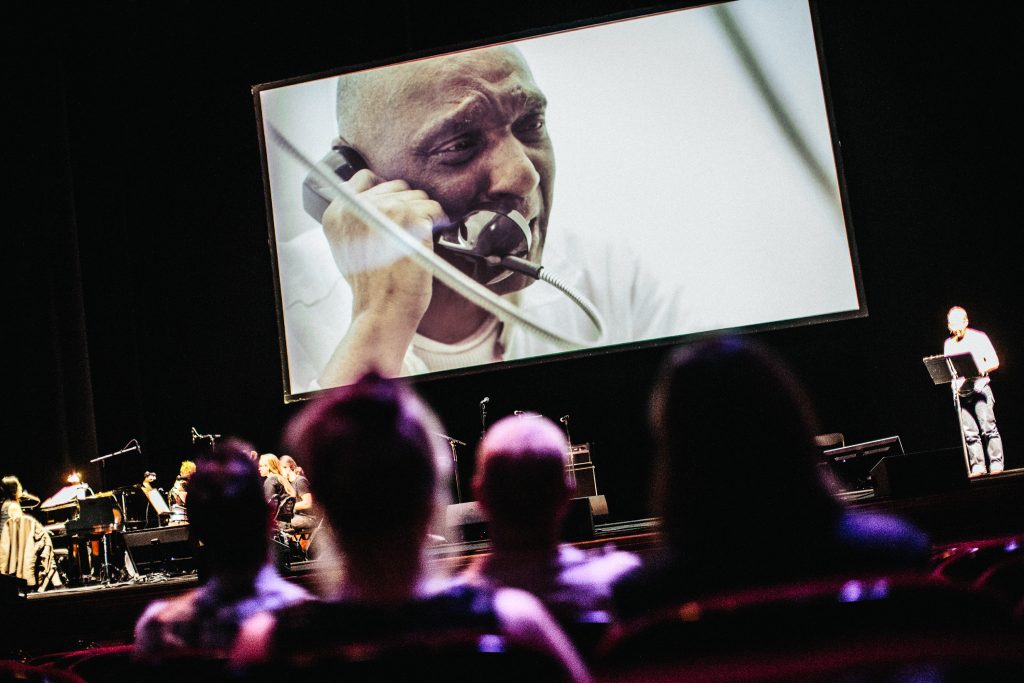 Laney Monroe, a photographer who heard about Pop Up Magazine from a friend, told me before the show that she came to see it with no idea what it’d be like and no expectations of what she’d get out of it. But she said that in “skimming through [a magazine] you miss details.” Hearing it, “different details might pop out, and resonate,” she said, in the same way that radio or podcasts can be more intimate.

Resonate, and then be told again. After the show, people gathered around the theater’s bar to talk about what they’d just heard. Many retold or unpacked stories they liked, such as one about how a student’s C-graded paper motivated him to push — successfully — for the 27th amendment to the constitution. Meghan Keane, a radio producer who attended the performance, said each story felt to her “like a delicious encounter with a stranger that you can’t wait to tell someone about.”

I went home and recounted at least five of the 11 performances to a friend, spending extra time retelling the haunting-funny performance of New York Time Magazine’s Jon Mooallem, called “About Face.” In his piece, Mooallem told of how he’d discovered he had a doppelganger in a dead Spanish matador, who, unfortunately, was so ugly a book described his face as being “as dreary as a third class funeral on a rainy day.”

There was the funny ha ha, self-effacing power of Mooallem’s story. But there was also a deeper exploration of what it meant to accept versus try to transform oneself, both for Mooallem and the matador. And all of this was conveyed in under 10 minutes. The performance was also accompanied by Spanish music from the live orchestra, an illustration of Mooallem with an appropriately Picasso-esque face and historical photographs of the matador with his bulls.

It’s important to note that Pop Up Magazine is gaining ground as most national magazines are struggling for readers, forced to slash newstand prices or shut down all together. But in many ways it seemed that it wasn’t just format of the night that made the magazine something special, but the quality of the stories it put out. Almost every performance was carefully-structured, deeply reported and, in some way, surprising.

“I feel like storytelling is one of those terms that describes an art, a science, and lately, a cliché too,” Daniel Stone, a magazine writer who attended Tuesday’s event, said. “Everyone does it and the market feels flooded. But that seems to allow for really good stories really well told to stand out … Tonight struck me as that.”

McGray told me he and his team work hard on every piece’s structure, going back and forth on edits, just as any magazine would. “We do that until we get to a point where it moves quickly and it’s entertaining and it takes you somewhere and surprises you and it’s interesting,” he said — and then they add music and art direction. They edit and re-edit the overall structure of the show, too, just as a magazine would. And so the order of a show can change from city to city. McGray said he thinks of the performance like a music playlist — he re-evaluates what people want to hear first, next and last.

And, just like any magazine, the show had its drawbacks. Some pieces were stronger than others. The ads at times felt disruptive. And there were subjects with which some audience members didn’t connect. But overall, the stories felt like they’d stick. Gonzo journalist Hunter Thompson once complained it was a “damned shame” that a field as “potentially dynamic and vital as journalism should be overrun with dullards, bums, and hacks… and generally stuck in a bog of stagnant mediocrity.”

Journalists have learned in recent, cash-starved years that mediocrity will not suffice. Pop Up Magazine suggests another way.

Pop Up Magazine, which is on its Winter tour, travels next to New York, Austin, Portland and Seattle. Another show is also in the works.