In the dark of Thursday night, artist Robin Bell drove up beside the Trump International Hotel in Washington, D.C., and flipped on a projector. Within seconds, the words “The President of the United States is a Known Racist and Nazi Sympathizer” appeared in bright blue on the side of the building. Soon after, he projected a second message, “#RESIST,” then a third, “We Are All Responsible to Stand Up and End White Supremacy.”

Bell, 38, is among a number of artists who criticized the Trump administration this week for the president’s response to a white nationalist rally that turned violent in Charlottesville, Virginia. He says he began using projections to make a statement that will resonate with passersby and open a dialogue.

With more than a half-decade of experience staging these scenes of art activism, Bell began creating work opposing the Trump administration in May. Since then, it has gone viral on social media. We spoke to Bell about his resistance art outside the Trump International Hotel, how he uses the news as inspiration and the impact of working in a public space.

Where did you get the idea for these projections? What’s their origin story?

“We, as a society, need to be visually reminded that things are not okay right now.”

This is something I’ve wanted to do since I started out in art and media 17 years ago. I’ve been creating politically-charged projections for about six years, ever since the Occupy D.C. movement. We’ve done projections against the war, against the repeal of the Affordable Care Act and against Trump’s environmental policy.

When Trump commissioned his hotel I just knew I had to do something with it.

What’s your process when choosing a statement to project?

It’s almost like making a TV show. You look at the issues and how people are talking about them, what imagery already exists, and then we start working on visuals. We work in Photoshop and After Effects to create the media, then we move on to projection mapping based on the architecture of the building upon which it’ll be seen.

We started with the “Experts Agree: Trump is a Pig” because it felt good. When you bottle things up and don’t say something, you feel terrible. This was us saying something. We, as a society, need to be visually reminded that things are not okay right now.

We chose the Trump Hotel because it’s a Trump beacon on public property. He’s taken it over and could be using foreign profits to enrich himself. It’s important we don’t shy away from calling that out.

And it’s a sad day when I, as an artist, can write that the president is a Nazi sympathizer and it’s completely accurate. 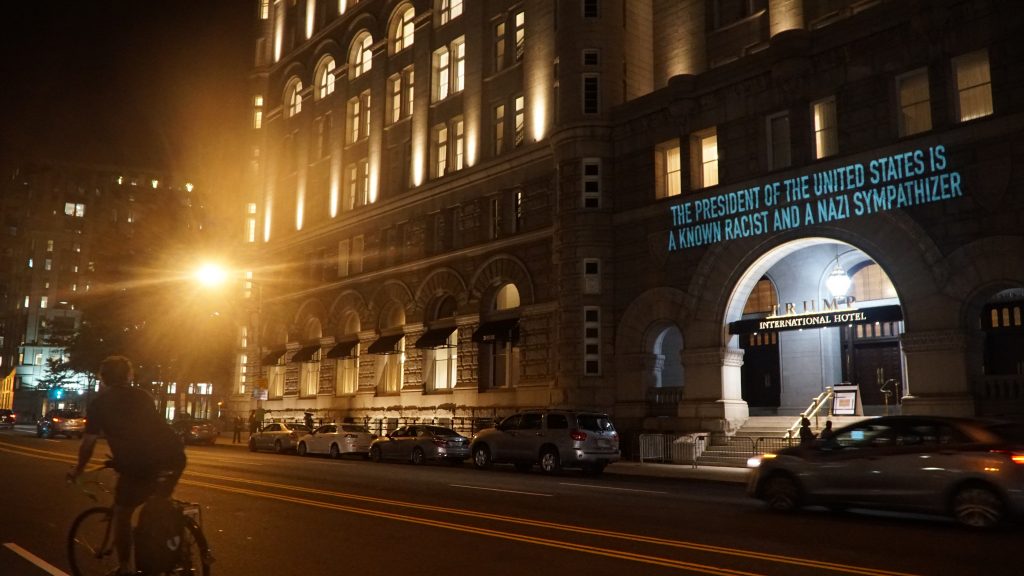 The words “We Are All Responsible to Stand Up and End White Supremacy” are projected on the side of Trump International Hotel in Washington, D.C. Photo by Liz Gorman

You’ve created other projections unrelated to Trump. What are those projects about?

This whole thing started as very anti-war, against the war in Afghanistan. So we’d do projections outside the Veterans Affairs Building. We did an entire series outside the Environmental Protection Agency protesting Scott Pruitt’s appointment as EPA Director and the EPA’s stance on climate denial. Last week, we projected anti-racism sentiments on the Confederate statue of Albert Pike.

Thursday night, we actually took a request from a fan to project “Heather Heyer” on the side of the Newseum. Heyer died fighting for the First Amendment, and the Newseum is right between the White House and Capitol. I like that the news is between those two buildings, and that despite the disparagement of the news media, it’s still a form of communication and First Amendment rights. 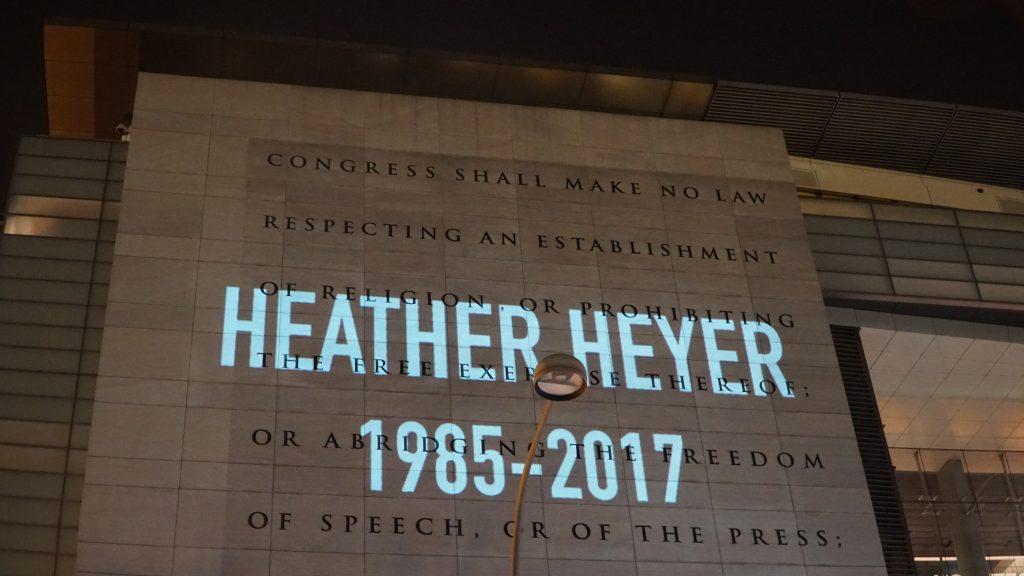 The words “Heather Heyer, 1985-2017” are projected on the side of the Newseum in Washington, D.C. Photo by Liz Gorman

Are you an activist, a protester, an artist or a journalist?

[Laughs] I’m all of those things. An artist’s responsibility is to look out at the world and look inside ourselves and then figure out how to express that — it might be a news story, or a projection or some other kind of media. For me, media is art, art could be a news story and the news could be a form of activism.

Have you faced any police pushback when doing your projections?

Legally, we know we’re able to do these projections. Whether or not that works on the street at nighttime is another issue. We’re not going to fight with the police because our issue isn’t with a security guard, our issue is with the people in power and the establishment that got Donald Trump elected.

At the end of the night, the headline shouldn’t be “video projectionist arrested,” it should be what we’re talking about. I want to find out how we have discussions about things without having it predicated on someone being arrested or someone being killed. 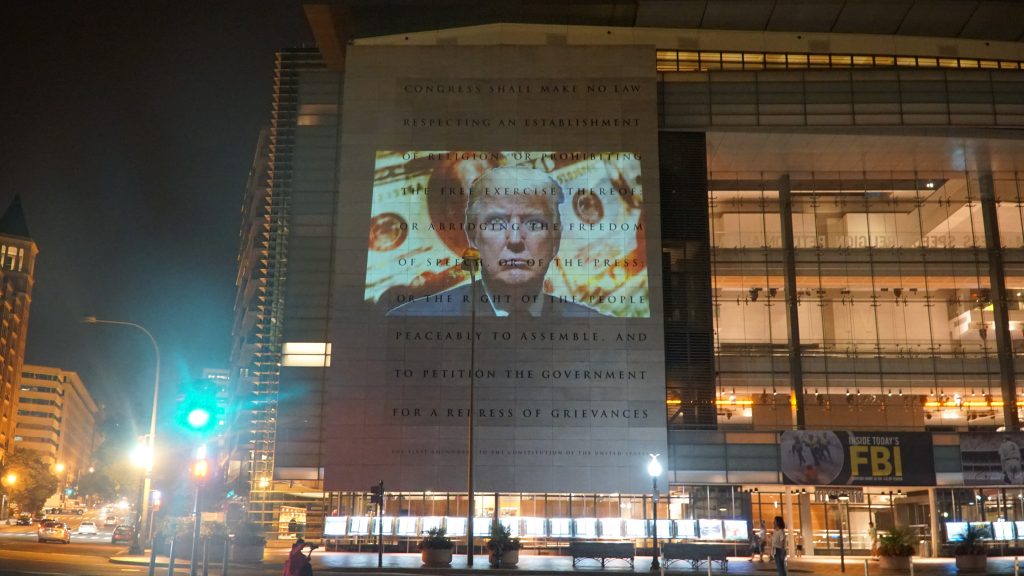 An image of Trump against a background of money is projected onto the side of the Newseum in Washington, D.C. Photo by Liz Gorman

How was the public responsed to the art?

There’s been overwhelming support for the project and people coming together to say society isn’t right.

The majority of pushback has been in comment sections on social media, but walking on the streets people have been supportive. That’s what I like about the projections, we’re literally on the streets talking to people, opening a dialogue. That’s what gives it authenticity and I only really value people who want to talk and engage. I’d be happy if people don’t agree with what I’m doing, so long as they acknowledge this is a [conversation] that needs to be had.

Left: The words “We Are All Responsible to Stand Up and End White Supremacy" are projected on the side of Trump International Hotel in Washington, D.C. Photo by Liz Gorman