More than half of those surveyed can’t name any of the rights guaranteed under the First Amendment. Only a quarter can name all three branches of government. More than half think (incorrectly) that immigrants who are in the U.S. illegally do not have any rights protected by the Constitution.

These startling stats come from a new study from the Annenberg Public Policy Center at the University of Pennsylvania. And now a group of America’s top designers, a design agency and a constitutional nonprofit are hoping to inspire Americans to think more deeply about the founding document.

In “We the People,” a collaborative poster exhibit up this week and next at The Cooper Union Gallery in New York, designers have reimagined the Constitution’s Bill of Rights. Many of the 11 posters focus on the darker side of American history. 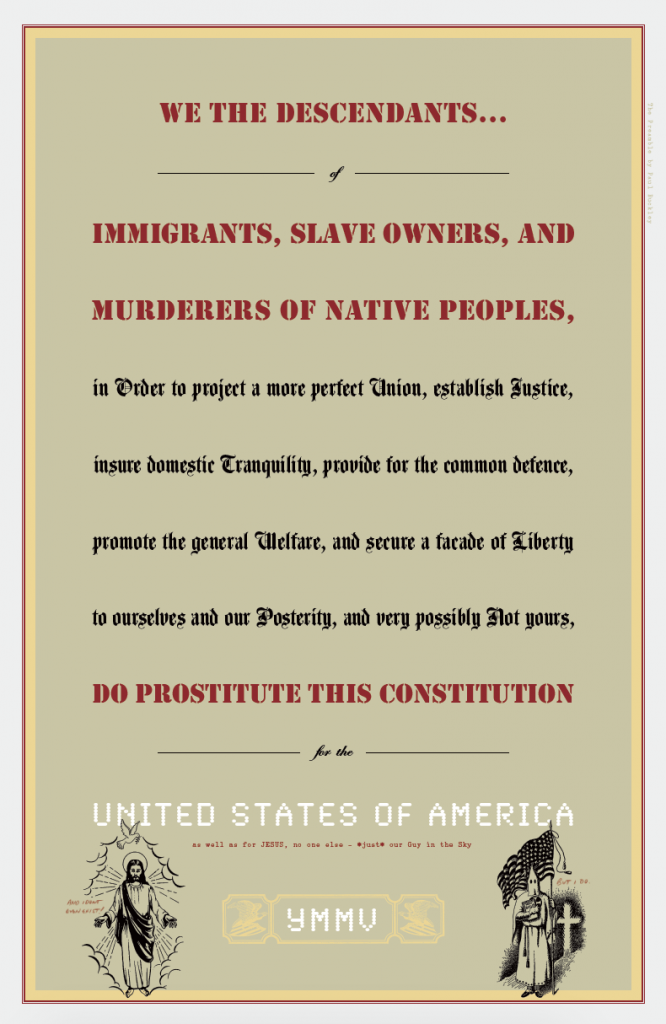 The Preamble to the U.S. Constitution, as reimagined by Paul Buckley

The preamble image, for example, highlights the American slave trade and mistreatment of Native Americans, while the poster depicting the Second Amendment (the right to bear arms) shows a man in a suit talking out of both sides of his mouth about gun rights and gun control. The poster representing the Third Amendment (quartering of soldiers) includes a hand grenade resting on a recliner chair with the words “Home Sweet Home” emblazoned over it, and the poster for the Eighth Amendment (cruel and unusual punishment) emphasizes solitary confinement and overcrowding in U.S. prisons.

Among the designers who participated in the exhibit are Edel Rodriguez, a Cuban-American artist whose work is often seen on the cover of The New Yorker, Time and Rolling Stone magazines, Milton Glaser, a renowned graphic designer who created the I ❤ NY logo, and Jessica Hische, a letterer known for her viral flowcharts like “Should I work for free?”

ThoughtMatter, the design agency that spearheaded the project, along with designer Mirko Ilić, said it assigned amendments to the graphic artists at random. Rodriguez, who was assigned the 10th Amendment (reserved powers), said he was initially unhappy to have to depict this particular amendment, because of how it had been used throughout history to justify segregation and anti-abortion laws.

But as he learned more about the amendment, he said, he found that it had also been recently used to fight back against some of the Trump administration proposed policies on immigration. 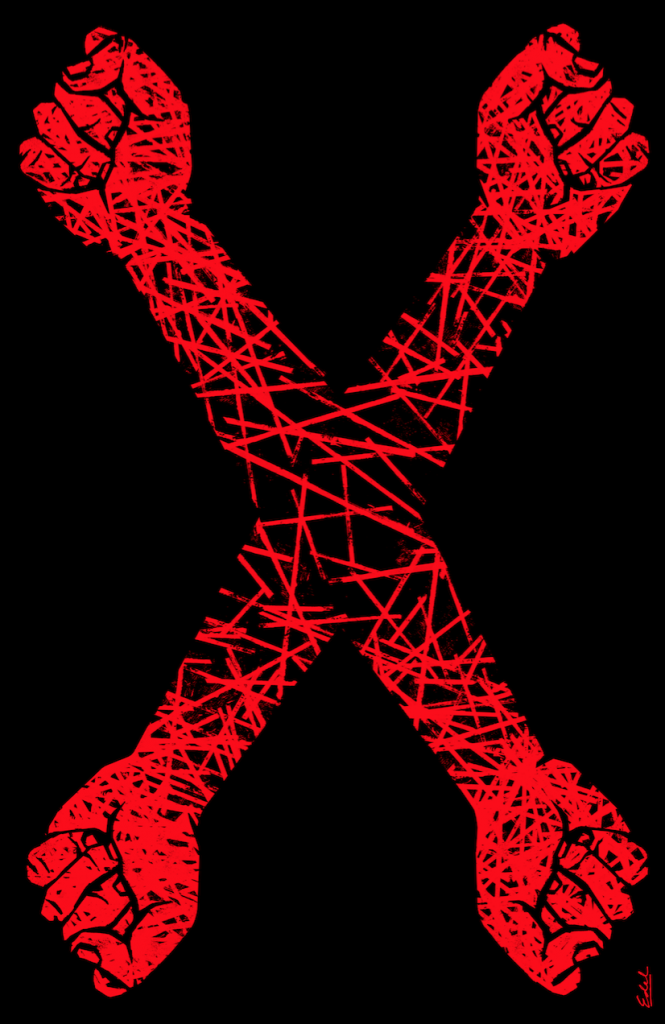 “The Constitution changes depending on the time,” Rodriguez said. His interpretation depicts arms crisscrossed in the shape of an X with hands in fists, which he said represents “that these arms are bound by federalism but branching out in different depictions, so they can also fight back against the binds of the government.”

Tom Jaffe, founder of ThoughtMatter, said the agency believes the principle of good design can “make something beautiful, powerful, or bring out a message. And when there already is meaning” — such as in the Constitution — “it can make that message stronger.”

ThoughtMatter previously made and distributed posters for the Women’s March on Washington.

Yue Chen, the graphic designer who created the poster depicting the Second Amendment, said that part of his aim was to put one of the more controversial amendments in context. “The amendment says that people should have the right to keep and bear arms, but what about the first part?” he said. (The first half of the amendment speaks about the “security of a free state”). “To me the common goal is really the security… And I feel like a lot of the talking points are being peddled by the politicians that are not necessarily beneficial to finding the better solution to keeping everybody safe.” 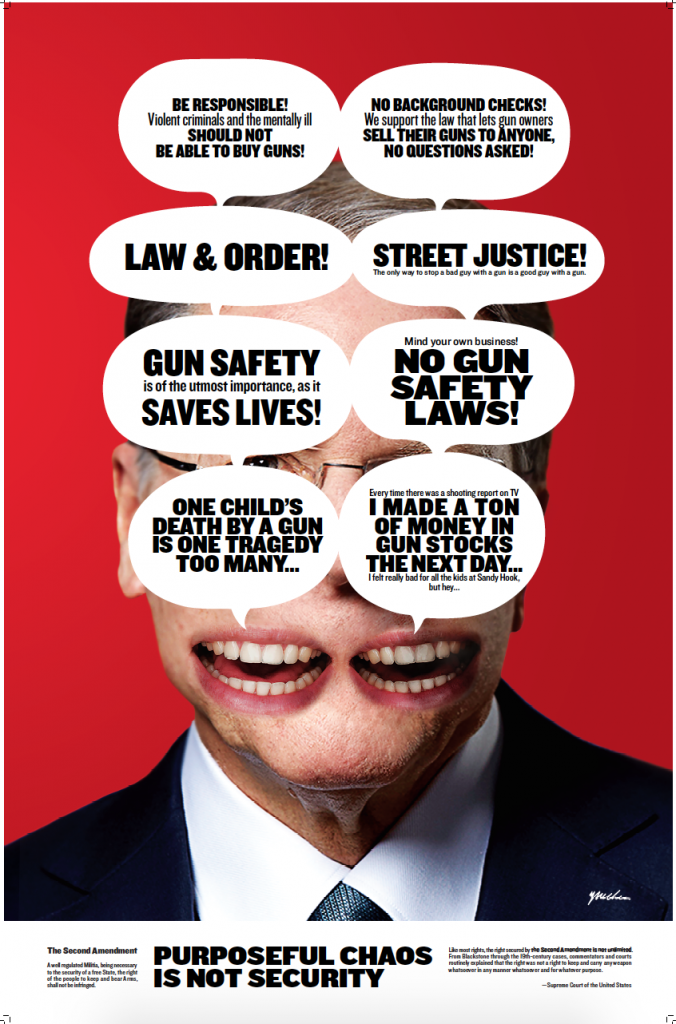 Julie Silverbrook, the executive director of the Constitutional Sources Project, the nonprofit that co-sponsored the exhibit, said she hoped the posters will reach people who otherwise might not be interested in learning about the Bill of Rights.

Silverbrook first connected with ThoughtMatter after noticing an earlier project in which they redesigned the pocket Constitution in an effort to make it more accessible and easy to read. ThoughtMatter, the Constitutional Sources Project and another nonprofit called the Civics Renewal Network now hope to get that redesigned constitution into the hands of as many students as possible. Some 1,000 copies have already been sent to teachers at the grade school and high school levels. 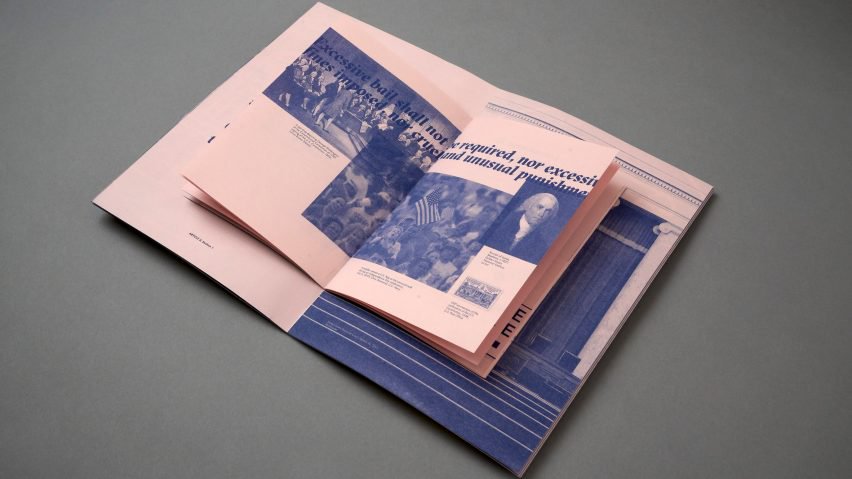 “We have a real civic knowledge deficit in this country. And the grand American experiment in self-government only works if our citizens are informed,” Silverbrook said. “So it is so important to get people excited about studying the Constitution and its history.”

The “We the People: Poster Exhibition” is on display at Cooper Union until September 30. See more of the images from the exhibit below. 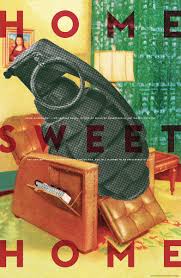 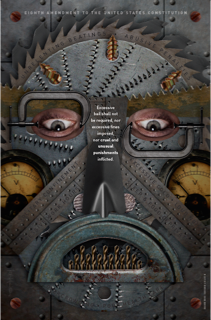 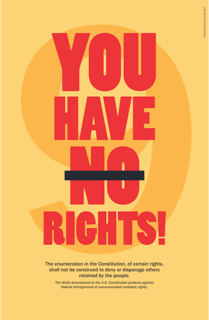 Left: An image from "We the People," ThoughtMatter's project to make the U.S. Constitution more accessible. Courtesy of ThoughtMatter