Putting your philanthropy where your mouth is 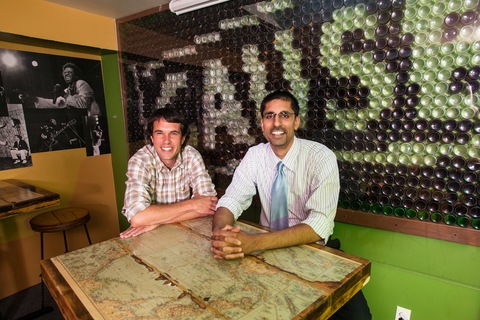 Nick Vilelle, left, and Raj Ratwani are restaurateurs, sort of. The owners of CAUSE gastropub take no salary, but donate 100 percent of their profits to charity. Photo by Alexis Glenn/George Mason University

At first glance, Washington, D.C.’s CAUSE bar and restaurant might seem like a typical gastropub. The atmosphere is lively. The menu is fresh — descriptions come complete with provenance — and the beer list is hearty enough to satisfy most beer snobs. The only hint that this might not be your typical dining establishment is the “PhilanthroPub” sign outside.

That’s the term CAUSE founders Nick Vilelle and Raj Ratwani, both 33, came up with to describe their restaurant which provides exposure and funding to nonprofit groups in the U.S. and abroad.

“We know for a lot of people it can be difficult to volunteer,” Vilelle told the NewsHour. “But it is easy to grab a beer and a burger. We want to integrate charitable living into day-to-day life.” Vilelle and Ratwani hatched the idea for CAUSE in 2006 shortly after Vilelle returned to D.C. from Africa where he spent two years in the Peace Corps. The two had gotten to know each other in graduate school at George Mason University. Over dinner one night, the friends talked about how they wished they had more time and money to give back. They noticed they were surrounded by a group of energetic young professionals who were out having a good time and spending money. What if they could open an establishment where people could give back by dining out? The idea stuck with them for several years before they decided to give it a shot. 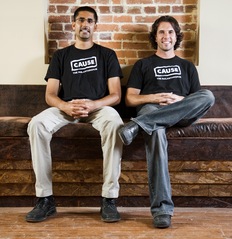 “We wanted to target the forty-and-under crowd,” explained Ratwani. “Specifically twenty and thirty-year-olds who are at a point in their lives where they are working really hard and find it’s hard to find a way to give back, financially and time-wise. This demographic spends the most time eating out, but the least amount of time volunteering and giving.”
With the support of a group of investors, and about $140,000 in seed money, they opened CAUSE last October in D.C.’s vibrant U Street corridor.

Having no prior restaurant experience, the two admit it was no easy task. “We’ve had our challenges like all new restaurants,” admits Ratwani. “There have been times when business is slow. But the idea certainly resonates with customers.”

The walls of the restaurant currently showcase graffiti-inspired artwork by local young artists. Customers dine at tables made from recycled wood and sit on chairs made from apple barrel bottoms. The chicken on the menu is free range, the beef is grass fed.
The money the restaurant takes in goes toward overhead and salaries of the wait staff, cooks and managers. And 100 percent of any remaining profit goes directly to a rotating group of nonprofit organizations selected by the founders and CAUSE’s Advisory Board.

Over the past year, the restaurant has supported seven nonprofits working on a wide range of issues in the U.S. and abroad. But because CAUSE, like many new restaurants, is not yet making a profit, the financial contributions that have gone to each organization have been relatively small thus far — somewhere between $1,000 to $2,000. And most of the money has been raised during special fundraisers hosted at the restaurant. But the founders say that they are close to being profitable, and hope future contributions will be significantly higher.
“For the organizations we support, it’s not so much about the money,” said Ratwani. “It’s about the exposure. If customers are interested, they can ask the wait staff for more information about the organizations we are supporting. The staff is extremely knowledgeable.”

Vilelle and Ratwani say one of the keys to the long-term success of CAUSE is that neither of them make any money from it. Both have full-time jobs outside the restaurant business; Vilelle does consulting work for nonprofit groups in Africa and Ratwani is behavioral scientist at a healthcare organization.

“We didn’t want to mess this idea up,” said Vilelle. “There’s no money coming to us. It doesn’t work for this model because the margins aren’t huge. We want to prove this model and have it be sustainable.”

Socially minded organizations can go to the CAUSE website, fill out five questions, and nominate themselves to be considered. Vilelle and Ratwani say they looking for groups that are focused on sustainability and impact, and have a solution to a problem that is scalable.

Higher Achievement, a D.C.-based after school and summer program for low-income 5th to 8th grade students, was one of the first organizations the CAUSE team selected to support. Higher Achievement Executive Director Katherine Roboff says she saw a noticeable jump in the number of volunteers after being promoted by CAUSE.

“We gained great visibility through our partnership with CAUSE,” said Roboff. “D.C. is a city that attracts a lot of talented, energetic and passionate people. These are the people frequenting CAUSE. And that’s a great population for us to reach.”

Last week, the CAUSE team marked their one-year anniversary at the restaurant with several late-night celebrations and DJ’s. Vilelle and Ratwani say they’ve learned a lot over the last year, and they want to keep fine-tuning how they promote the causes they are supporting. They are already hearing from people around the country who are interested in starting a PhilanthroPub in their city.

PBS NewsHour explores the work of social activists and volunteers working in small ways to tackle some of the largest challenges facing both the developing and the developed world. Read more on our Social Entrepreneurs page.

Editor’s note: This story has been updated to reflect the following correction. The original report credited the top photo to Neal Piper Photography. The photo in fact was taken by Alexis Glenn of George Mason University.