R.A. Montgomery, co-author and publisher of the long-running children’s book series “Choose Your Own Adventure,” which allowed generations of young readers to choose from dozens of possible endings, died Nov. 9 at his home in Vermont, his wife said. He was 78.

The cause was a “short illness,” his wife, Shannon Gilligan, told NewsHour, adding that the family wanted the exact cause of death to remain private.

Raymond Almiran Montgomery was dedicated to experimenting with role-playing concepts that taught kids basic math, or something more complex, like cultural sensitivity. That educational mission to use fiction to explain, say, the very real 1970s energy crisis, would go on to inform a popular book series that sold more than 250 million copies across 200-plus titles since 1979.

A couple of years after Montgomery founded Vermont Crossroads Press, he was approached by lawyer Edward Packard with the idea of making a book that allowed the reader to control his or her fate. Montgomery jumped at the opportunity to publish what he saw as role-playing games in book form, Gilligan said.

Then known as “Adventures of You,” the first book in the series — Packard’s “The Cave of Time” — transported readers to a dimly-lit cave that could throw the reader, the curious explorer, to prehistoric times or to A.D. 3700. Shortly after, Bantam Books acquired the rights to the series and changed the title to “Choose Your Own Adventure.” The books began with the reader occupying a character — alien, millionaire, genius — before embarking on an page-turning adventure.

The books that captivated children throughout the 80s and 90s began with a warning and all-caps emphasis: “You and YOU ALONE are in charge of what happens in this story.” This phrase reminded young readers of their active participation in crafting a narrative within the book’s 42 endings. (The number of endings varied book to book.)

While Packard’s first entry played with the conventions of time, Montgomery’s first book for the series, “Journey Under the Sea,” cast a deep sea explorer on a dangerous search for the lost underwater city of Atlantis: 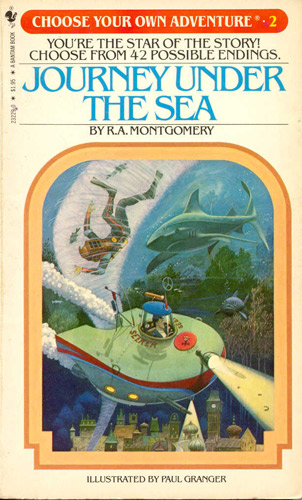 “If you decide to fight the squid with your spear gun, hoping to scare it off, turn to page 17.”

“If you decide to signal Maray to pull you up at top speed, knowing you will get the bends, turn to page 19.”

The tropes, which predated video games, are familiar: the reader as owner of his or her destiny, the sudden plot twists, the sense of discovery — and death. So much death.

“The wrong decision could end in disaster — even death,” the book’s warning goes.

“Ray himself, as a parent and as a writer, didn’t have a lot of judgments and ideas about what kids shouldn’t be allowed to hear about,” Gilligan said. “What was very exciting to children about ‘Choose Your Own Adventure’ was that you could dip your toe into areas such death by explosion,” which was not typical children’s book fare then.

The books did avoid curse words, but you could still fall off a cliff and die.

But the ability to go back and zap an intruder with a ray gun, Gilligan said, enabled a free-for-all energy that attracted children to the books and their multiple endings. In the ‘Choose’ books, children could take control of the situation (after previously avoiding a horrible ending in the maw of a beast).

Charlie Kochman, who was Montgomery’s editor from 1987 to 1993 on the series, said that although the death was always a popular ending in the “Choose” books, they fulfilled another teaching opportunity to reinforce moralistic choices.

If you chose to steal a wallet in the story, for example, death awaited you. But the aim, Kochman said, wasn’t to treat the stories as morals exactly.

“We didn’t want to hit kids over the head, we didn’t want to make these books lessons,” he said. To do so, Kochman said, would morph the story into “medicine.” So, the moralistic undercurrent was wrapped with peril, swift consequences — “It’s no use. The whirlpool has you in its grip” — and rewards, if you gave back that wallet.

At its peak, Montgomery and Packard wrote a book a month and invited other writers to use their imagination to box the reader into a corner. When Bantam stopped publishing the series in 2000, Montgomery and Gilligan co-founded Chooseco, LLC to relaunch the series three years later.

The “Choose” books, for all their fantastical narratives, were couched in some reality. Montgomery, an avid traveler, was inspired by the various locales he visited over the years. His first trek to Nepal led to “The Abominable Snowman” in 1982. After spending a lot of time in the Yucatán Peninsula, he wrote 1981’s “Mystery of the Maya.” Gilligan said her husband was kicked out of Yale because he spent too much time mountain climbing and skiing.

And the adventures did not always end with a bang. On page 47 of “Journey Under the Sea,” after the reader decides to give up the expedition for Atlantis, Montgomery channels Ralph Waldo Emerson and reminds the young mind that it’s about the journey, not the destination:

“[Scientists] have put together another expedition and want you to join it. You are tempted. Adventure into the unknown is what you like,” the ending on page 47 said.

Gilligan said Montgomery was already planning his next trip to Costa Rica before he passed. Montgomery lived the meaning of his books, she said.

Montgomery’s last entry in the series was “Gus vs. The Robot King,” which was published in September.

Left: R.A Montgomery, co-author of the long-running children's book series "Choose Your Own Adventure," died on Nov. 9 in Vermont. He was 78. Photo courtesy of Shannon Gilligan/Chooseco, LLC