The painting, “Salvator Mundi” (Saviour of the World), depicts Jesus Christ holding a glass orb and giving a benediction. It is one of only 16 known da Vinci paintings in the world. Most of those that remain are in European museums like the Louvre, which houses his most famous work, the “Mona Lisa,” painted around the same time in the early 1500s.

The bidding on the da Vinci painting, at Christie’s in New York, started at $70 million. Within two minutes, the price rose to $200 million, prompting gasps from the packed selling room. When the price reached $300 million, after 10 minutes, the crowd applauded. The bidding went on for a total of 18 minutes, primarily between two bidders on the phone with Christie’s Old Master specialists Alex Rotter and Francois de Porteere. The gavel came down with a $400 million bid from Rotter’s client. With seller commissions, the final price will total $450,312,500, Christie’s said.

It was the first ever public sale of a da Vinci painting, according to Christie’s. 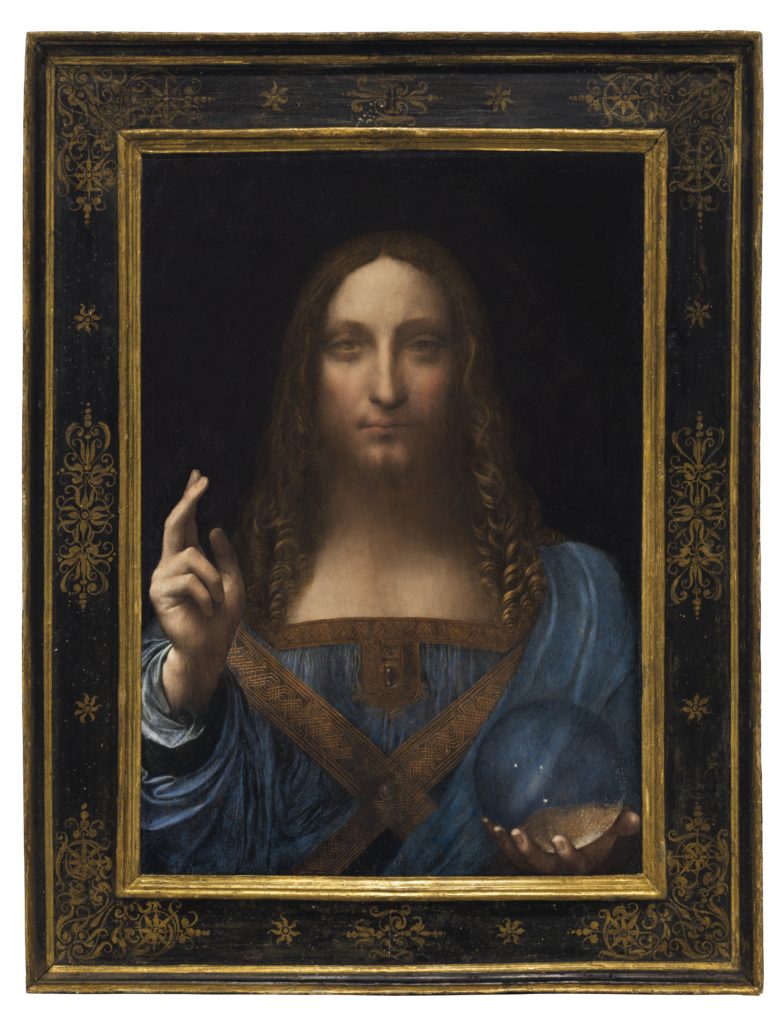 The da Vinci painting price surpassed the previous record of $179 million paid at Christie’s, including the auctioneer’s commission, for Pablo Picasso’s “Les Femmes d’Alger” (Women of Algiers) in 2015. Three of the 12 art works that have sold for more than $100 million were painted by Picasso, including the first to break the nine figure mark, “Garcon a la pipe” (Boy With a Pipe), which sold in 2004.

Prior to the sale, Christies and the seller went to great lengths to prove the picture was an authentic da Vinci. Da Vinci scholars in Milan and Florence, and curators at the Metropolitan Museum of Art in New York and the National Gallery in London, got a close look and said they believed it was in his hand.

“This is a painting that was copied many times around the time it was made by Leonardo’s followers and pupils — about 20 copies of it, contemporary copies, are known still,” Alan Wintermute, Christie’s senior specialist for Old Master paintings, told PBS. “When you see them, you can see immediately the difference.”

The identifiable da Vinci features include the smoky, shadowy lighting on the face and the clear anatomical renderings of the hands. Scholars took X-rays to study brush strokes da Vinci had painted over, dated paint pigments and the walnut panel back to the 1500s, and found traces of lapis lazuli da Vinci was known to use for his blue color.

Thousands of visitors have seen the painting since it went on display at an exhibit at the National Gallery in London. It traveled through Hong Kong and San Francisco, and since November, has been open to the public at Christie’s headquarters near Rockefeller Center.

Still, skeptics had their doubts and questioned its condition after a six-year restoration process.

The mystery of “Salvator Mundi”’s whereabouts and its provenance added to its mystique. From the collection of the French royal family, which may have commissioned the painting, it migrated in the 1600s to England, along with a princess who married into the British royal family. The painting disappeared from public view for more than 200 years, and when it resurfaced in 1900, it had been painted over and was thought to be a copy. Because it was not attributed to da Vinci at the time, it garnered only 45 British pounds when it was sold privately in 1958 and disappeared again. It was rediscovered in 2005 at a U.S. estate sale, where three New York art dealers acquired it for $10,00. They sold it to a Swiss businessman, who in turn sold it to the Russian billionaire who parted with it Wednesday night.

Christie’s did not disclose the name of the buyer. But Christie’s Global President Jussi Pylkkänen, who conducted the auction, said the “excitement from the public for this work of art has been overwhelming and hugely heartening.”