The artist who eviscerates both Reagan and Obama

In 1998, the Art Institute of Chicago received a rare angry letter. The patron claimed the museum has been “conned” into paying for 21 drawings by American artist Raymond Pettibon.

The offending artwork was barely bigger than a sheet of office paper. Two columns of handwritten text wrap around a black-and-white ink drawing of a surgeon, arms outstretched, prepped for procedure. The text started with, “When Reagan’s dead I hope to do the autopsy. What’s rest of him.” The text reads as a screed against the former president. The word “a**hole” appears four times.

Prints and drawings curator Mark Pascale said the patron, who identified as a Reagan admirer, focused on “one tiny aspect” of Pettibon’s work. After all, much more imposing images of Gumby, a baseball player and even the head of Charles Manson were also displayed next to the surgeon. 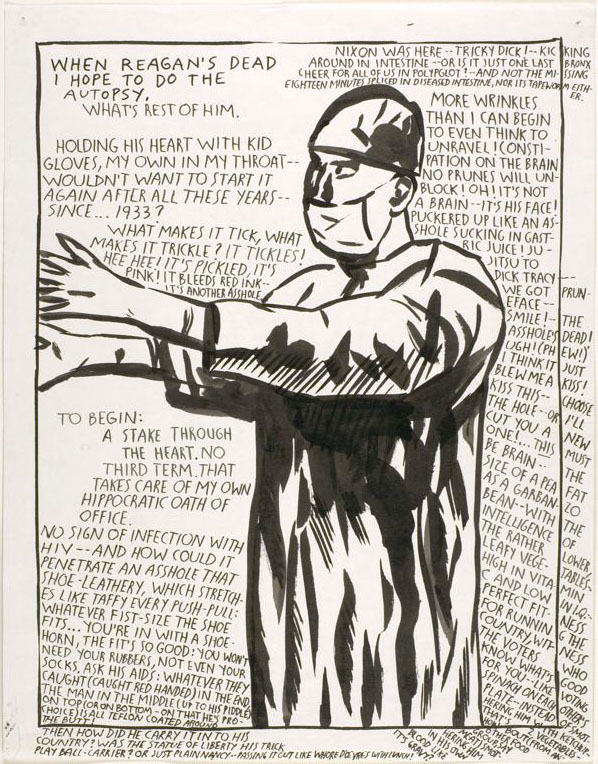 “Raymond Pettibon: Homo Americanus,” a new art book out in April, attempts to provide an overview of the artist’s four-decade career with selections from his Black Flag flyers, Xeroxed zines, high-contrast drawings and other paper-based works. A solo exhibition of Pettibon’s work is also currently on display at the Deichtorhallen Hamburg in Germany.

One estimate in the book said the 58-year-old artist has dreamt up more than 20,000 drawings, many of them using puerile imagery — pulpy violence, swastikas, and, well, erections. But to harp on these is to ignore his awe of the formidable waves that threaten to engulf his surfers. His love of baseball. His messy, inaccurate hearts.

“Very little differentiates the thought process behind this effort from a nut with a spray can defacing art,” the letter said.

Pascale sent the letter to Pettibon through his dealer in California. He later learned that it brought a smile to the artist’s face.

“You’re always aware of [Pettibon’s] point of view,” Pascale told me. “You can disagree with it — and many people do — but there’s something really impactful about what he makes. He’s right in your face.”

Most of Pettibon’s work is a marriage of rough visuals and text as seen on the many Black Flag gig posters with the iconic four-bar logo and the Tumblr-approved album cover of Sonic Youth’s “Goo.” 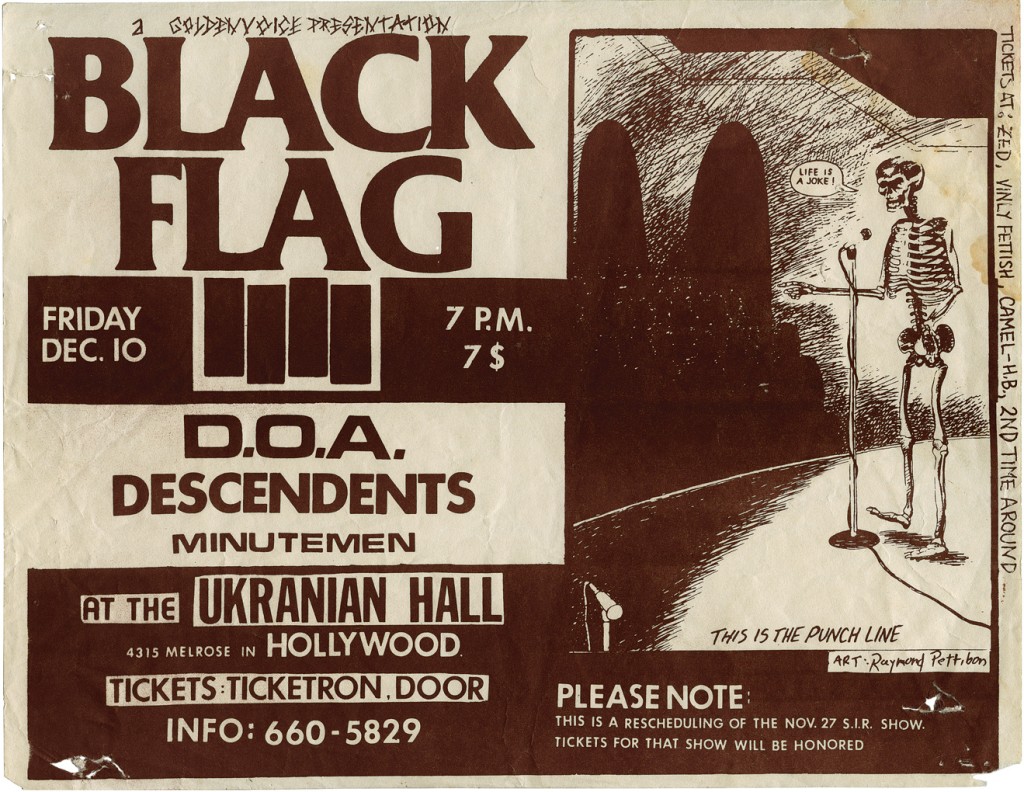 Sometimes, the words compete in the same space as his ink drawings, gradually shrinking in size as he runs out of space. Other times, his figures talk in speech bubbles, the go-to comic book rendering of dialogue or thought. Or a single sentence narrates the scene.

And, often, his text is more provocative than his imagery. To wit: The angry letter complained about what Pettibon wrote. Reagan doesn’t appear with the surgeon.

“Americanus” is punctuated with political statements from Pettibon, including blunt criticisms of President George W. Bush, the Iraq War and the Abu Ghraib revelations. Other times, his artwork acts as missives against America’s occupation in the Middle East. And while the Art Institute of Chicago didn’t display any, Pettibon has drawn not-at-all flattering depictions of Reagan (and Nancy too). 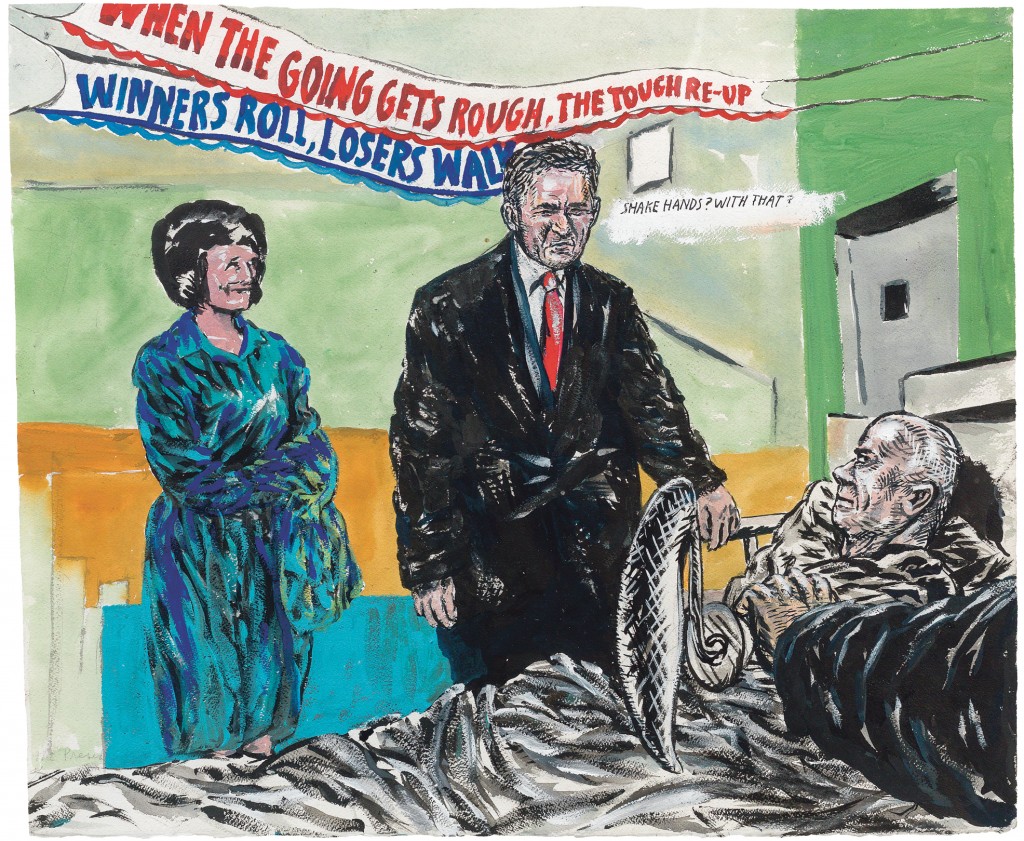 But, as Pettibon described it, he was compelled to address these moments in American politics.

“I resent having to be put in the place that I even have to engage in making political works,” he told Sonic Youth bassist Kim Gordon in a 2013 interview for “Interview” magazine. “But the thing is, no one the f*** else is, right now, in the art world. And, for god’s sake, no one in journalism is. So it’s like I’m reporting in the drawings.”

“Americanus” doesn’t shy away from calling Pettibon’s condemnations of the Bush administration a “personal vendetta.” But, the Reagan and Bush fixations don’t exactly translate as partisan warfare either. He has also extended his disgust to President Barack Obama. “He’s worse than Bush,” he told sleek magazine in 2011.

Pettibon, as he said, negates “transcendental politics.” There’s no hero worship of presidents in his work. 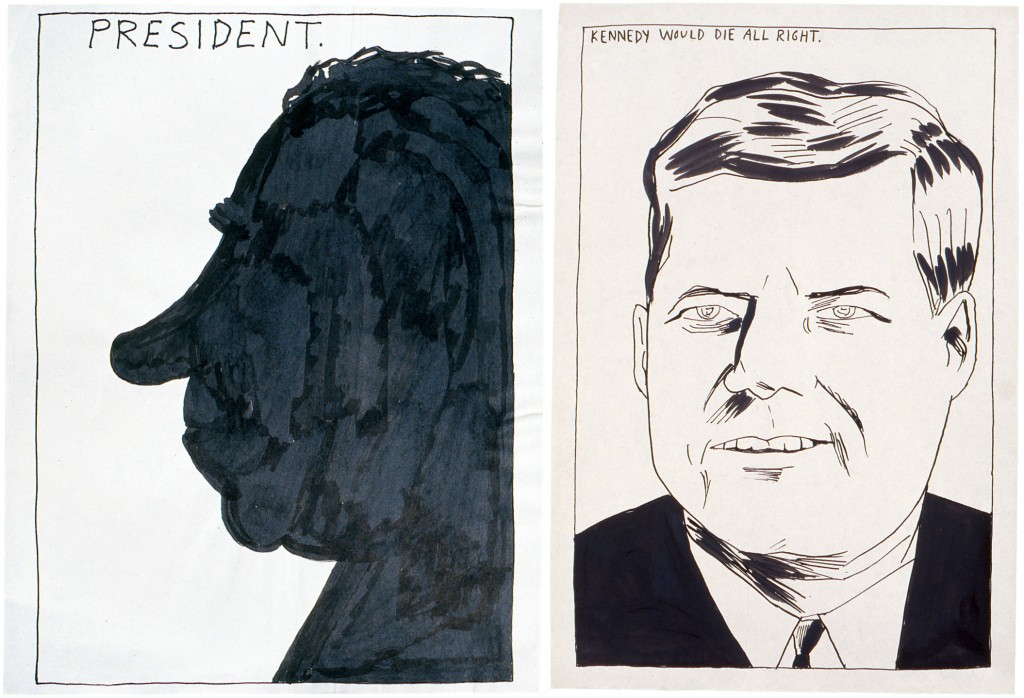 Early in his career, Pettibon drew political cartoons for the Daily Bruin, the student newspaper at the University of California-Los Angeles. He may not like being called a “political artist,” but Pettibon works to dismantle the public’s awe and respect for political figures.

“Like thinking Lenin, Stalin, Wilson, FDR, JFK, LBJ, Nixon, et cetera were great presidents, because for every book that acknowledges how many people they actually killed … They were responsible for those people dying, okay?” Pettibon is quoted as saying in “Americanus.”

“Imagine yourself being blown up or bleeding out, right? Stabbed, shot, napalmed. That didn’t happen by accident,” he added.

The nuclear mushroom clouds that cropped up throughout Pettibon’s career are appropriately horrific — and the direct result of President Harry Truman’s decision to drop the atomic bomb on Hiroshima and Nagasaki. 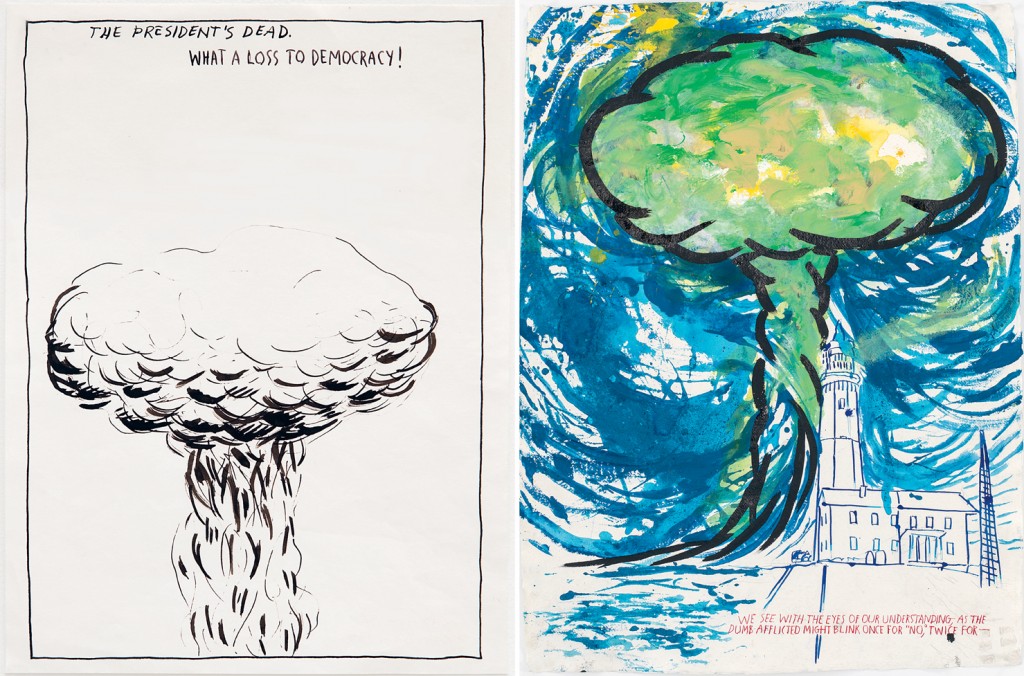 “In almost all of these powerful figures, he sees the negative side or the side we often overlook as pragmatists because we see this sort of good that could come out of a leader,” Zwirner said. “I think there’s a constant attempt to remind us all the things that we want to ignore.”

Zwirner said it was difficult to find any “sympathetic representation of a presidential figure” in Pettibon’s work, except for maybe the first U.S. president, George Washington. But why?

Washington gave up power, Zwirner said. He was offered a kingship, and he turned it down. 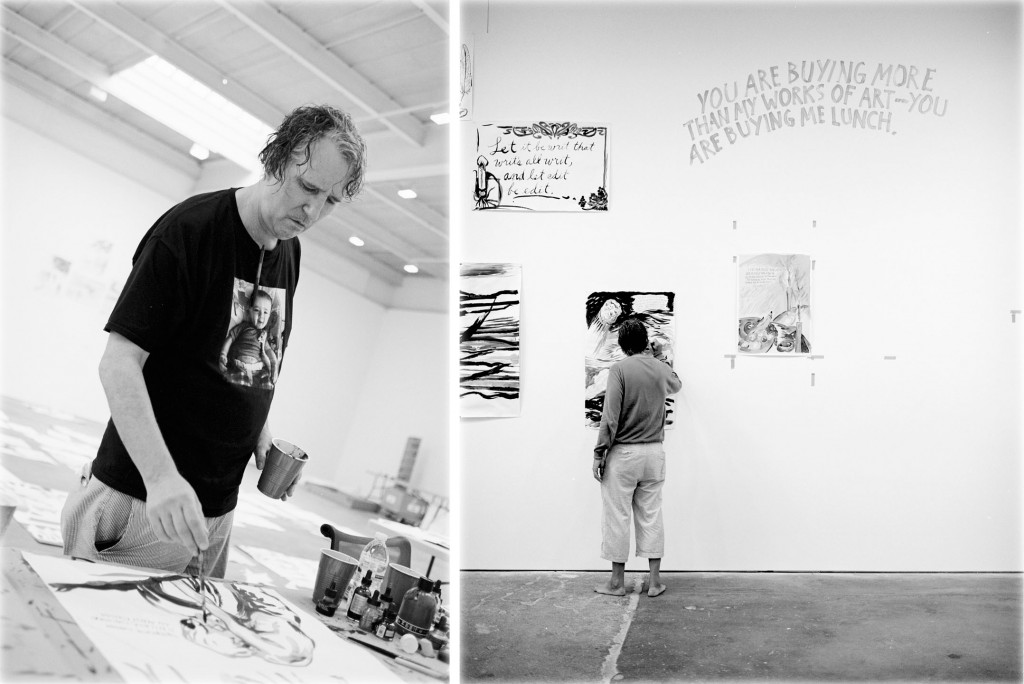 Thumbing through the nearly 700-page “Americanus,” you see the artist show more reverence for old-fashioned locomotives or the lone surfer amid a wall of water, no doubt a fixture for the Hermosa Beach, California, native. And, instead of U.S. presidents, Pettibon chooses to elevate a green glob of clay who first appeared as a segment on “The Howdy Doody Show”: Gumby. 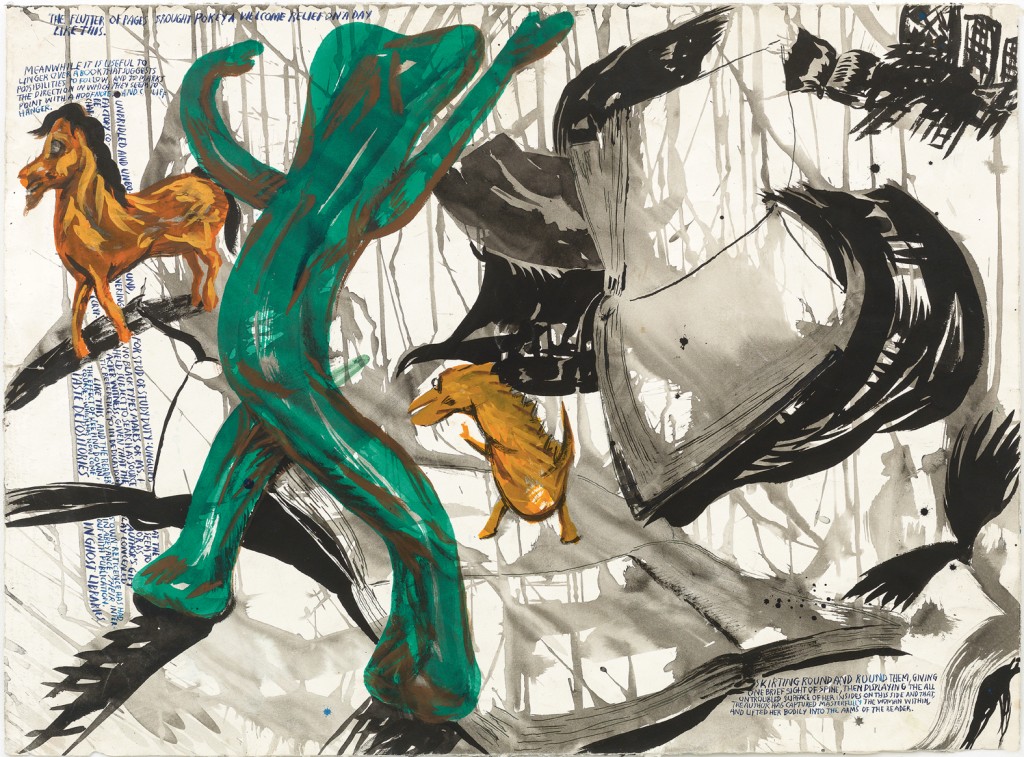 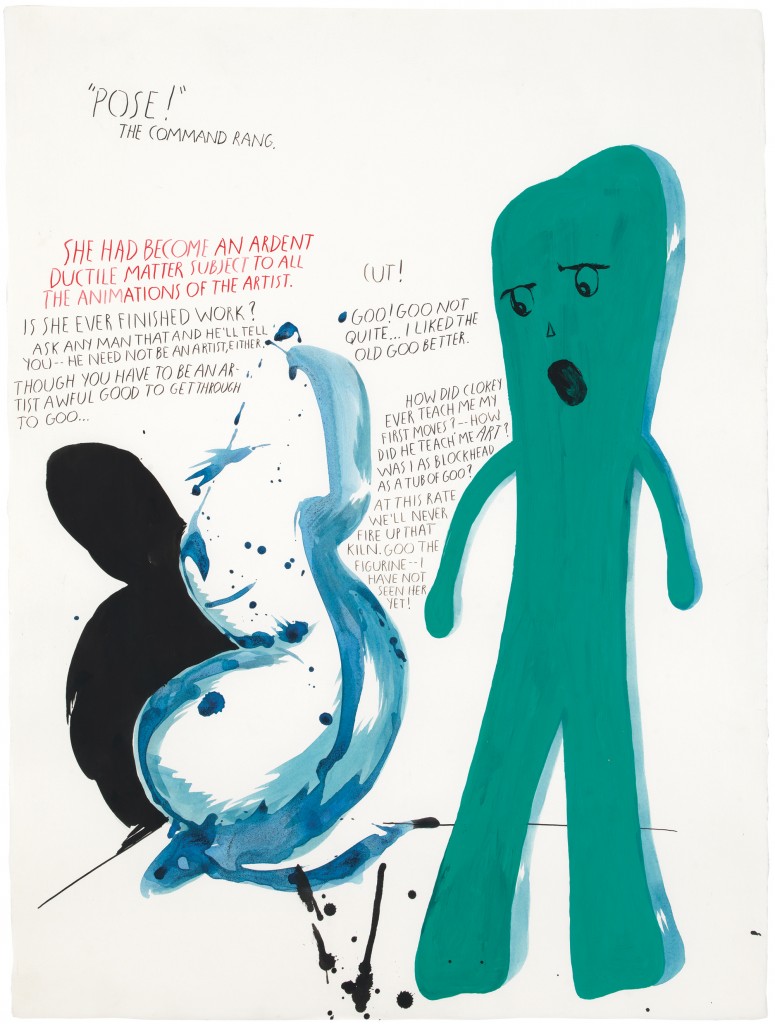 “[A]nyone, I think, should compare cartoons to the President of the United States,” he told art21 in 2011. “[T]hose are the real cartoon figures, and those are the real ridiculous figures.”

A green, shape-shifting humanoid is not usually fodder found in an art gallery, but Pettibon has the Art Clokey-claymation creation weave through various books and cross paths with various historical figures as in the 1950s TV show. Gumby’s sense of exploration led him into the texts of “Ulysses,” the Bible and “Mein Kampf.”

“With my work sometimes Gumby does change history, or he becomes a part or an agent of historical change for the better,” Pettibon said in “Americanus.”

On the show, Gumby crossed the Delaware River with George Washington. Under Pettibon, a genderless Gumby can now be seen with a phallus.

“All I’m really asking is for you to look at [Gumby] with the same kind of respect that you would if it was some important historical figure or Greek statue,” he told art 21.

Another throwback cartoon character gets special attention from Pettibon: Vavoom, a teeny Eskimo with a booming voice. He only says one word: his namesake, “VAVOOM!” Pettibon ripped the character from the margins of the “Felix the Cat” cartoons, where his voice has moved mountains.

In Pettibon’s work, Vavoom is transported to the most vast, awe-inducing landscapes, sounding off his disyllabic cry.

“You could imagine [Vavoom] being sonar for humanity,” Pascale said. “We are tiny little blips and Vavoom is this little blip with a big mouth, but he’s able to project himself. We all do that: We project ourselves in the world,” he said.

If U.S. presidents have too much of a platform already, Pettibon gives Gumby, an inanimate object, the opportunity to change the narrative. He allows Vavoom to come to the foreground, despite the limitations of his one-word cries. In “Americanus,” Pettibon said Vavoom never used his earth-shattering voice for “malicious purposes, even though he could.”

“[Pettibon’s images] is giving voices to the people who are consistently silenced by society … the people who we just decided aren’t allowed to speak, as it were, and revealing this sort of inner monologue, all the sorta strange, clandestine whisperings of the people we usually hear from, undermining them in certain ways,” Zwirner said.

In one drawing, a woman stands next to a coffin draped with an American flag. She’s pointing at Bush, yelling, “You killed — murdered — my son!” Bush, bookended by Karl Rove, Dick Cheney and Condoleezza Rice, says, “You’re just sore because you lost your son.”

For Pettibon, Obama could easily stand in for Bush.