Our June pick for the PBS NewsHour-New York Times book club, “Now Read This” is Luis Alberto Urrea’s “The House of Broken Angels.” Become a member of the book club by joining our Facebook group, or by signing up to our newsletter. Learn more about the book club here. 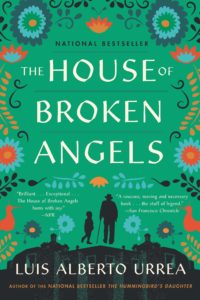 Courtesy of Little, Brown and Company

When Luis Alberto Urrea was 21 years old, he received a pearl of wisdom from Rudolfo Anaya, considered one of the founding authors of contemporary Chicano literature. “If you can make your Mexican grandmother the grandmother of a reader in Iowa or Nebraska through your art,” Anaya said, “then you have accomplished the most powerful, moral and political act in the world.”

Since then, Urrea says, that advice has woven its way into everything he’s written. Urrea, who was born in Tijuana and whose father is Mexican and mother American, often writes about the Mexican-American experience in his novels, nonfiction, essays and poems. He is a 2005 finalist for the Pulitzer Prize for “The Devil’s Highway,” his nonfiction account of a group of Mexican immigrants lost in the barren Arizona desert. His most recent book, “The House of Broken Angels,” is the June pick for PBS NewsHour-New York Times book club, “Now Read This.”

Below, Urrea shares more advice for writers and readers about establishing a routine (or not), starting anywhere with literature (you never know it will lead), and getting inspiration in unlikely places (even from the symphony).

What is your daily writing routine?

As I tell my students, if you are a writer, you are always writing. It’s who you are. With that in mind, much of my writing routine doesn’t necessarily have ink or pixels in it. I read, read, read to stoke the furnace. I think and wrestle and trade ideas with my wife. Then I usually hit a notebook. But once I sit down at the keyboard, it is a dash that can take hours at a time.

I am not what I call an “industrial writer”: I have a hard time sitting down for eight hours a day with a two-day weekend. If anything, I am more like a gardener or a farmer and my “productive periods” are seasonal. I follow the dictate of the haiku poet Issa, “Simply trust.” It always comes.

What is your favorite childhood book? Or one book you think everyone should read?

I didn’t actually read this book – my mother read it to me. But it changed everything and set a pattern I wouldn’t recognize until I was in my 40s. Most people know my dad was Mexican, my mom was American, I was born in Mexico and Spanish was my first language. My mother, hoping to make me an American boy, understood something quite profound. It is all accomplished through story. She actually began with Charles Dickens, but I was not going to be a British child.

Every time I write something that makes me smile or laugh, I imagine a little bit of Samuel Clemens’ cigar smoke in the room.

She understood that right away and switched to Mark Twain. I could not believe that some old gent who had been dead probably for 500 years could somehow, through my mother, come into my bedroom and speak to me in such a familiar and modern tone. He clearly didn’t think he was superior to me. It was all so astounding. He wrote about the Mississippi River. I didn’t know what that was – I had never seen a river.

And something I did not expect, was the introduction of Becky Thatcher. Dare I confess Becky Thatcher was my first romantic interest? You can’t know how those sly avatars will put themselves inside your mind. But every time I write something that makes me smile or laugh, I imagine a little bit of Samuel Clemens’ cigar smoke in the room. (And I did, by the way, read everything later).

Honestly, the childhood book I did read over and over was not so highbrow. It was a potboiler written by female sci-fi pioneer Andre Norton, called “Storm Over Warlock.” In this epic, the hero (a young teen boy) battles the evil giant ant men who have come to his planet for conquest. He is aided by a hawk and two psychic wolverines. Literary gold!! The point of this being that Andre Norton opened me for the future genius of Ursula K. LeGuin and that is who everyone should read. Start anywhere.

What is something you’ve seen, watched or read that you think is overlooked and deserves more attention?

Andre Norton’s “STORM OVER WARLOCK”!!! Oh no, sorry … got that in already. 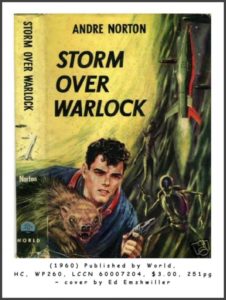 Seriously, I don’t like to deal in terms like “overlooked” because if one person read your book, it might have been the exact right person. That being said, I am like my daughter in a puppy store. When I see shelves of old and forgotten books, I want to take them all home, feed them, brush them and give them a blanket. One writer of the old school who has brought me great pleasure and who has made several appearances in my many writing workshops is a man named David Grayson. He is not in any way hip, ironic or millennial. Grayson was an early 20th century sophisticate and Washington D.C. insider who relished farms and dirt roads and old trees and the satori of daily life. He wrote books with such unhip titles as “Adventures in Friendship.” But there are many paragraphs in those books that will give you a wonderful companion.

Another book I wish everybody would read was my mother’s favorite book, May Sarton’s “Journal of a Solitude.” Any writer should read it. And any one growing old (who isn’t?) should read it. Solitude does not have to be isolation. I loved that book so much that when I lived in New England, I would drive up to Maine just to see her house on the coast.

What is the best piece of writer’s advice you’ve received?

Rudolfo Anaya, the masterful Chicano author of “Bless Me, Ultima,” has always been a mentor and father figure for many of us of Southwestern or Latinx heritage. He gave me a pearl of wisdom when I was 21 years old and it vibrates through everything I write: “If you can make your Mexican grandmother the grandmother of a reader in Iowa or Nebraska through your art, then you have accomplished the most powerful, moral and political act in the world.”

Can you describe the moment you knew you wanted to write this particular book? And when did you know it was over?

I didn’t want to write this book. I didn’t think it was a book. I had never understood the editor’s classic comment “you are too close to this material” but I was definitely too close to this material since the book would deal with my own brother’s death and my own family’s struggles. My wife, who witnessed the crazy scenes at the funeral and party, was eager for me to write this story. But I didn’t see a story, at least not a story that you, readers, would find interesting and rewarding. Then, we had the chance to hang out with the author and poet Jim Harrison, a life-long hero. He, himself, was not long for the world. We were at a supper and he startled me by saying, “Tell me about your brother’s death.” He sat beside me as though in meditation as I told him everything. And when I was done, he said, “Sometimes God hands you a novel. You better write it.” That was the moment.

Mark Twain would scoff at me for being hi-falutin’, but I had patterned a lot of the composition on the rhythms and tonal shifts in [Ottorino] Respighi’s symphonic tone poem “The Fountains of Rome.” If you are a fan of Respighi’s, you might notice the hustle and bustle and shifts in the rhythms of the different instruments coming in and out. I had always intended for the book to have a meditative coda, partially to imply the message of grace that permeated my thoughts. In other words, to suggest without saying so, life after death.

The Chicago Symphony Orchestra played a Respighi concert here and I had never heard Respighi live. To hear the end of “The Fountains of Rome” gave me goosebumps because, of course, it ends after all the excitement with an almost haunting coda of quietly descending notes and the tolling of a church bell. When I heard it, and felt the tingles, I knew that I had it to my satisfaction. That the effect, for me at least, worked. That’s when I knew it was done.