Reflections on the power of poetry in Detroit schools 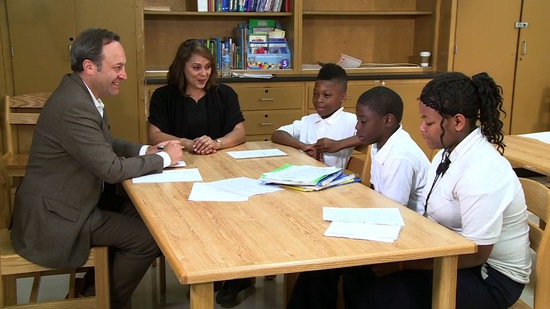 Our story on poetry in the Detroit public schools is part of a series I’m doing around the country with U.S. Poet Laureate Natasha Trethewey that we call “Where Poetry Lives.” The idea is simple: Not to bring poetry from the outside to people, but to examine and capture the many wonderful, often unexpected ways and places where it’s found. And, yes indeed! Poetry lives in some of Detroit’s public schools, through a program called “InsideOut” that brings professional writers into classrooms.

We visited Marcus Garvey Academy in east Detroit and watched as poet Peter Markus worked with middle school students, getting them to listen to, think about, and then write their own poetry. Markus often uses a question to prompt the students’ writing. On this day, he used a version of our theme and asked them, “Where does poetry live?”

We talked with Markus, InsideOut founder Terry Blackhawk, Marcus Garvey principal James Heard and three young students. And, of course, we were very conscious of the setting: a public school and a troubled part of a troubled city in which many of the students face daily difficulties. Later that day, we also talked to Justin Rogers, an alumni of the InsideOut program who’s now attending Wayne State University and has grown into an accomplished poet, performing his work around the country. We were there when he and two others from the program read at an evening gathering in a midtown art gallery (another ‘sign of life’ in Detroit, by the way).

It was 12-year-old Quintin Pope, who stayed with me long after the visit. He told us about his poetry coming from his “deep, deep thoughts” and I was startled at first, in part because I hadn’t even asked a question, and yet he had a desire, a need to tell us.

“What kind of deep thoughts?” I asked.

“Like I would say, ‘my poem is a baby going from life to death.’ Everybody gets a life and everybody, well, everybody will have to go to sleep one day.”

I remember, too, the hands flying up when Peter Markus asked about the meaning of metaphor. And it was fun to watch how badly several young students wanted to get up in front of the class (and us) to read their poems. Oh, the disappointment when Markus called on someone else! And then there was Principal Hearn, who made me laugh as he laughed while recalling how flabbergasted he was when first approached about hosting InsideOut in his school: “It was unbelievable. We have so many needs for our kids and to have poetry as an alternative? I thought to myself, wait a minute — work with poetry?”

Needless to say, he’d come around. And he’d come around after seeing what I get to see so often at Marcus Garvey: Language, words, writing — they’re for everyone. They open doors. They allow us to know ourselves and to know the world around us.

Editor’s Note: The PBS NewsHour special poetry series, “Where Poetry Lives,” features reports by U.S. Poet Laureate Natasha Trethewey and NewsHour’s Jeffrey Brown on issues that matter to Americans through the framework of poetry. This installment about teaching poetry in Detroit public schools aired on Oct. 23, 2013. You can also read reflections from Trethewey and hear Detroit students perform their poetry. The first installment of this series aired on Sept. 12. with a report on a poetry project in New York that works with Alzheimer’s patients.