‘Do I look like a ‘shroom salesman?’ and other things overheard at a Dead show

One man walked directly up to me and asked if I had any mushrooms to sell him. I thought, “Really? Do I look like that guy?”

Well, OK, this is a scene and we were part of it, part of a three-day “happening” of music, community and — I’m going with it — history. This particular encounter took place in the parking lot before the first of the weekend’s concerts, the place where members of the tribe gather to meet old friends, reminisce about concerts past, scrounge for a few extra tickets for those still in need (“looking for a miracle,” in Dead parlance), and get excited about the “Fare Thee Well” we were all there to see. It was, of course, a festival of tie-dye t-shirts, many worn as a kind of uniform for veterans of favorite concerts. (I was one of the few in a button-down shirt — I don’t think that had anything to do with being a potential ‘shroom salesman.)

I should say that I was never one of them, the Deadheads. I grew up with rock ‘n’ roll, still love rock ‘n’ roll, played rock ‘n’ roll. I know lots of Grateful Dead songs. But I’d never fully signed on (tuned in?) to the band or that scene. 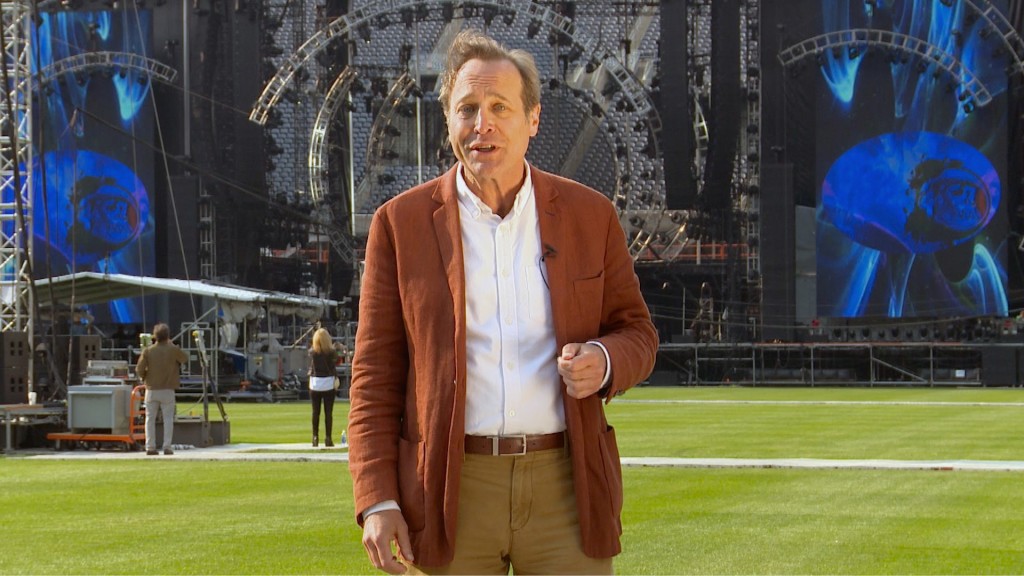 The impetus for this story was my friend and colleague, producer Mike Melia. Mike, to a greater degree than I’d been aware, knows his Dead history (and songs and words) and was eager to be in Chicago, his hometown, for the concerts. Several months back we started to talk about doing a story and it quickly became clear that there was something more here than the immediate thrill or ‘gee whiz’ of the event itself. For one thing, the Dead were ahead of their time in how they built an audience, shared their music (encouraging fans to record their own tapes) and let their performances be their prime signature.

“They were an Internet band without the existence of the Internet,” as Chicago Tribune music critic Greg Kot told me. Then there’s the music — let’s not forget the music. The Dead combined elements of rock, folk, country, jazz and — I’m thinking about the sonic bursts as well as Mickey Hart’s percussion experiments — space-age. When I got a chance to ask drummer Bill Kreutzmann what defined the Grateful Dead sound, he surprised me a bit with an analogy to Dixieland music: the “freedom” of it, where different instruments lead at the same time.

Our interview with Kreutzmann was a highlight of the trip, in part because it was unexpected and almost accidental. We’d been told that none of the band members would do an interview. Then, while setting up for something else, one of us saw a fellow off in the distance who looked vaguely familiar. It was the soundcheck for the concert, so band members were around. And yes, it turned out to be Kreutzmann and, yes, it turned out he would come talk to us. An impromptu, almost off-the-cuff talk about good times (the thrill of playing together) and bad times (destructive drugs, too much focus on money), condensing 50-plus years into about 10 minutes, which you can see here.

The magic moment: when Kreutzmann told us of his own “magic” moment so many years ago, the first time he heard a young guy named Jerry Garcia: “He was playing guitar … I was as close as we are right now. I watched him and I said ‘I’m going to follow him forever,’ just to myself.” The moments that make up — and sometimes change — a life.

Speaking of which, I admit I’m a sucker for this kind of thing, but I did like talking to a man and his son from Indiana who’d come together to share the experience. The Dead were clearly dad’s thing and had been for many years, no doubt pre-dating the very existence of his offspring. When I asked the son about being here, he hugged his dad, laughed and said, “Well, it means more to him, but it means a lot to me, too.” Then he kissed his dad on the head.

Were the Dead (and their promoters) cashing in one last time? No doubt that was part of all this — the money to be made from tickets, streaming video and more. There was a lot of grumbling in the run-up to the weekend. But those who were there seemed to be all-in and happy to be part of it.

As to the concert itself? I don’t know how to judge it as a music performance. The sound is inevitably a bit mushy, the sight lines to the stage difficult and distant. Connoisseurs and critics can debate the way the musicians did or didn’t mesh. Many will argue over the very idea of a “Grateful Dead” performance 20 years after the death of patron saint Jerry Garcia. For my part, I stood (along with 70,000 of my new best friends) and enjoyed the spectacle. The rafters shook, the smoke wafted (yes, that, too), the music blasted — the power of rock ‘n’ roll with a lot of history, nostalgia and screeching guitar solos echoing into the cool night air.

Editor’s note: This post has been updated to correct the spelling of Bill Kreutzmann’s name.