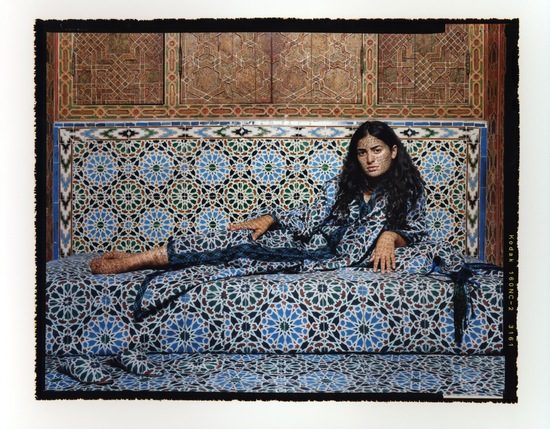 Moroccan-born Lalla Essaydi always knew she was going to be an artist. Her father was a painter, and some of her fondest childhood memories include drawing with colors and pencils in his studio in Marrakesh. It wasn’t until a journalist spotted her photographs decades later while she was a graduate student at the School of the Museum of Fine Arts in Boston that she began to gain international attention.

Essaydi, who also lived in Saudi Arabia for many years and now lives in New York City, has had her work exhibited across the United States, Europe and the Middle East. Known for her large format photographs, her work combines Islamic calligraphy and representations of the female body, focusing on the interconnection of faith, culture and gender, and challenging notions within all three.

Her photographs feature women dressed in fabric inscribed with henna calligraphy posing in front of abstract backgrounds that utilize the same cloth and script. She sees her work as “intersecting with the presence and absence of boundaries; of history, gender, architecture, and culture; that mark spaces of possibility and limitation. That is my story as well.”

“Revisions,” which opens Wednesday at the National Museum of African Art and runs through Feb. 24, 2013, features 30 multimedia pieces selected from Essaydi’s photographic series. Selections from other rarely showcased paintings and installations are also featured.

“Lalla Essaydi has used multiple artistic media to take on a central challenge: confronting deeply entrenched historical notions about femininity and womanhood through the images of the Muslim world,” Johnnetta Betsch Cole, director of the National Museum of African Art, told the Smithsonian’s press office. “Her work is vital and offers a fresh new voice and needed insight as it challenges the stereotype and perception of Arab, African and female identity.”

Art Beat talked with Essaydi on the eve of her exhibition about her creative influences, the themes in her work and her work using multimedia:

How did your Moroccan and Saudi Arabian upbringing influence your creative work?

Lalla Essaydi: My work is really autobiographical, it’s about my own experiences growing up in Morocco and living as an adult in Saudi Arabia for many years. It’s obviously infused in my work, but my work really goes beyond the Arab world or Arab culture. It really engages Western art and the role in which Arab women are used that I find problematic.

The Orientalist painters of the 19th century had some sexual fantasies that they wanted to realize and they couldn’t realize it in their own world. They chose the Arab world, in North Africa mostly, to convey that world, but it doesn’t exist. Unfortunately, it was not only done then but it’s still invasive now. I use the female form to respond and deconstruct that idea about the Arab women within Western art.

Describe your focus in working in multimedia.

Lalla Essaydi: First, I think of myself as a painter, because growing up my father was a painter. Growing up, I always remembered the quality time I had with my father in his studio, where he would give me colors, pencils and I started drawing. Already at that young age, I knew I wanted to be an artist. I’ve always been fascinated with colors to the point that I see names and cities in color. I thought that was the norm for everyone until I went to class and shocked everybody by saying that.

Art for me is not something that I came into but it’s something I am. I’ve always wanted to become an artist, but I never thought I’d go to the professional level. I acquired skills so I could express myself, but I never thought I’d have an audience or show my work to the public. It all happened in graduate school, and I was showing my work in exhibitions and a journalist saw my work and started talking about it. Then galleries wanted my work and it just happened like that. As long as I’m painting or doing something creative, it doesn’t make a difference for me at all.

I started by being a painter and when I went to study for my Master’s degree, at the School of the Museum of Fine Arts/TUFTS University, all classes were electives, so I started learning photography as a tool to document my paintings. It became a medium I fell in love with. So painting, photography, installation or film, for me it’s just a means to achieve something to create.

Who are some of your creative influences?

Lalla Essaydi: I’m influenced by Western Oriental paintings, but there are many other artists that I appreciate very much and I sometimes quote in my work. I’m mostly influenced by writers. Maybe because of my continuous research into feminist art and writing, but it’s mostly writers. For example, Fatema Mernissi, a Moroccan sociologist, Noelle Sayadaw, an Egyptian sociologist, the work of Linda Nochlin, an feminist art historian and Edward Said. Those are the major influences in my work.

What are some of the central themes in your work?

Lalla Essaydi: Gender issues within Islamic cultures, the Western voyeuristic tradition of Orientalist paintings, as well as what is the relationship between East and West? I am very much interested in a way of becoming a bridge, because I want to make it known that Orientalist paintings are just Western male fascination and a fantasy. I want people to understand that. I’m not laying blame on anyone, but I want people to acquire a different kind of seeing. I want them to synthesize themselves with these situations where women are portrayed so they would start seeing other things than sexual exploitation.

How critical is your faith and gender to your work?

Lalla Essaydi: I am a Muslim and a woman and if I’m trying to make clear the role of the Moroccan and Muslim woman, that we are not just confined and sitting in one corner, that has nothing to do with your faith and religion. It is almost fate for me. It’s my duty and my passion to show another facet of Arab women, the real Arab women to the Western world and the world in general. We are very strong, we’re human beings and we have our own personality on our own. We want to be seen like that. We don’t want this projection of the Western world or Islamic culture on us from both sides. We just want to be seen as human beings.