Selfies and the communal experience of Yayoi Kusama’s infinity rooms

On a chilly Monday morning in Washington, D.C., a line wraps around the Hirshhorn Museum and Sculpture Garden for the must-see show in town: “Yayoi Kusama: Infinity Mirrors.” It’s a celebration of the Japanese artist’s long career, an exploration of life and death and the infinite, and a psychedelic, kaleidoscopic museum experience. It is also a show that has drawn record-setting attendance — the most for the Hirshhorn in 40 years.

“Are you ready for all these desperate visitors?” a museum security guard asks a Hirshhorn staff member. Minutes later, people with timed passes rush inside the exhibit. Most have their phones out, screens glowing. They are eager to be one of the first to snap a photo in one of Kusama’s “Infinity Mirror Rooms,” where an arrangement of sculptures, mirrors and lights give the perception of the infinite, and where it is impossible to take a bad Instagram. They hurry past a line from Kusama, printed on a wall, meant as an idea to help frame their understanding of the exhibit: “Our earth is only one polka dot among a million stars in the cosmos.”

Kusama wrote this in 1968, just a year after she released a film called “Kusama’s Self Obliteration.” In the film, she covers animals, plants, objects and people in polka dots — a motif she would employ again and again throughout her career. The idea of “self-obliteration” is to remove oneself totally, in order to become one with the universe. The selfie culture at her exhibit, though, seemed in danger of encouraging the opposite.

A sign just inside the museum’s door encourages people to share what they see, while a hanging screen shows a curated display of Instagrams from the exhibit. According to the museum, the hashtag #infinitekusama has reached more than 35 million accounts on Instagram and Twitter since the show opened in late February; many of the photographs are selfies. The museum sign also cautions “no flash” and “please don’t touch”; it was only days after the exhibit opened that a selfie-taker fell and smashed one of Kusama’s iconic pumpkin sculptures. 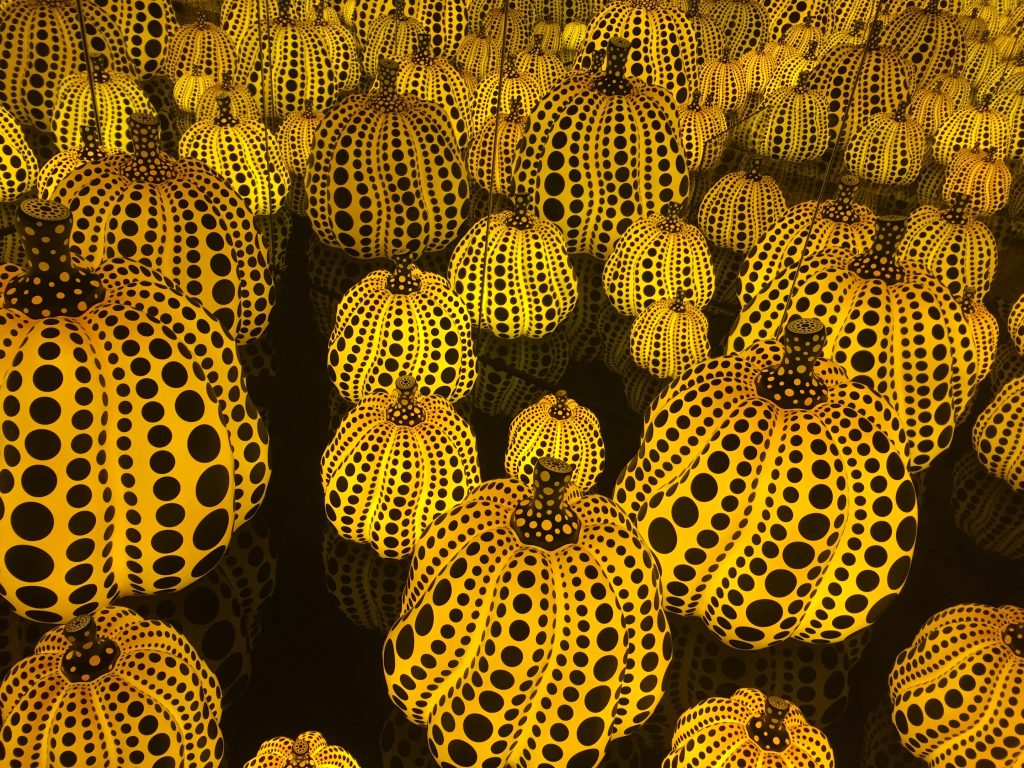 Kusama’s iconic yellow and black polka-dotted pumpkin sculptures. One was smashed after a museum-goer fell while taking a selfie. Credit: Elizabeth Flock

Mika Yoshitake, who curated the Kusama exhibit, says she doesn’t see the selfie infatuation as a threat to the art. In an email to NewsHour, she wrote that while she agreed the best way to experience Kusama’s rooms was without the filter of a smartphone, Kusama “also intended the work to be part of a communal experience” — whether in-person or online.

Social media, Yoshitake wrote, also “triggers the infinite repetition of an image of oneself that has been so central to [Kusama’s] practice as an artist.”

That infinite repetition can be seen in any of Kusama’s infinity mirror rooms, and it is also at the center of her “Obliteration Room,” the last room in the Hirshhorn exhibit. There, a white space is covered in thousands of colorful polka dots, which seem to stretch on forever.

Abby Johnson, a fashion student visiting the exhibit, said she had come for a second visit just to take more selfies. The first time she came it was too crowded in the infinity rooms for her to take pictures of herself in the spaces alone. “I took maybe 100 photos last week. I post them on Instagram and Facebook. Now I’ll take more,” she said. This time, she also planned her outfit to match the artwork, wearing a brightly colored jacket that reflected the gold in Kusama’s work. “It’s the best exhibition I’ve been to so far in my life,” she said. 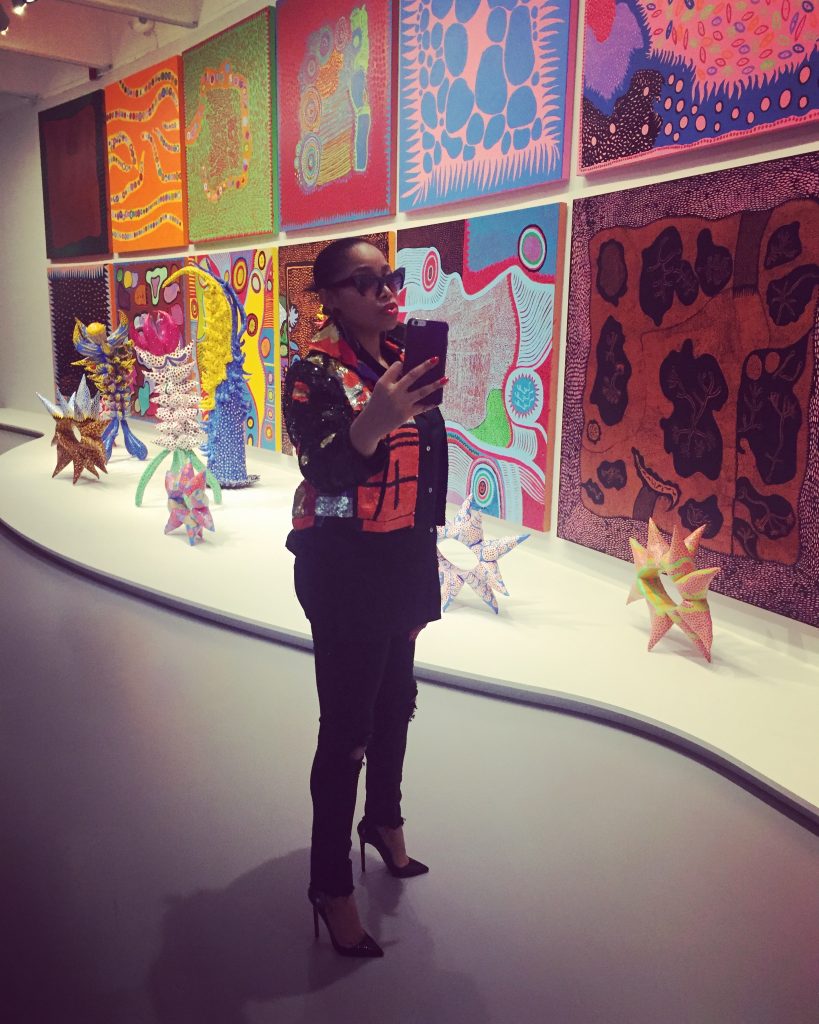 That enthusiasm, of course, is another reason for curators to appreciate the proliferation of Kusama’s work online. Joanne Heyler, chief curator of The Broad, a contemporary art museum in Los Angeles that will host the exhibit in October, said the important thing was getting people in the door. Once that happens, she wrote in an email, the museum would try to engage visitors more deeply, “an approach that, done well and in a welcoming way, can complement and even override the impulse to see art exclusively through a digital device.”

Michele LeTourneur, an interior designer living in Fairfax, Virginia, said she came to see Kusama after seeing all the posts about it on Facebook. She said she is a regular visitor to the Smithsonian museums and hadn’t often seen a show this crowded.

“I go to the museum often, and am shocked at how few people take advantage of our world-class museums,” she said while standing in line for one of the infinity mirror rooms. “I think people wouldn’t have known about this if not for social media.”

LeTourneur, too, was contemplating posting a photo of the exhibit on social media, but with a sarcastic caption — a variation of the “if a tree falls in a forest” line, one that would set her apart from the legions of selfie-takers. If you don’t post, were you really there?

Kusama, of course, isn’t the first exhibit to be a social media phenomenon. Last year, the “WONDER” exhibit at the Renwick Gallery in Washington, D.C. drew similarly record-breaking crowds and inspired a proliferation of online photos and selfies. Renwick curator Abraham Thomas said that response was helpful to curators.

“Instagram feeds allow us as museum professionals to see these artworks through our visitors’ eyes,” he wrote in an email, offering “an insight into the personal narratives that they create around these objects and experiences.”

“This allows us as curators to re-think the stories we tell,” he said.

At the Hirshhorn Monday, Anjali Srivastava, a physician in D.C. who takes photos as a hobby, carefully entered each of Kusama’s Infinity Mirror Rooms with a camera. It was her second time back to the exhibit; the first time, she came just to look.

“I’m into spirituality,” she said of what brought her there. “I love [Kusama’s] theory about dots, that we’re all dots, big and small.”

Later that day, Srivastava posted a photo to her Instagram feed of herself in an infinity mirror room, her face obscured by the viewfinder. She was surrounded by colorful lights, repeating to what looked like infinity. “Stars, the Earth, I and You, We are but one Polka Dot,” she wrote. “Just Brilliant.”