In the private sector, jobs increased slightly. “The crucial private sector net job growth was plus 64,000 against expectations of a 75,000 gain,” writes the Financial Times. However, construction was down; manufacturing too.

While the headline unemployment rate — the U-3 — counts only those who’ve looked for work in the past week and found not one hour’s worth of paid employment, U-6 adds everyone who’s looked in the past year, plus those working part-time (it could be as little as a few hours) but want a full-time job. The U-6 shot up to 17.1 percent of the “labor force,” higher even than last September.

Readers may remember that even U-6 doesn’t tell the whole story because, in America, if you haven’t looked for work in a year and a day — or longer — you’re dropped from the labor force entirely and don’t show up in the unemployment data at all. Almost 1 million people seem to have fallen into that category in the past month, though that typically happens in September. Still, it’s the reason the headline rate — U-3 — didn’t rise even as total employment fell.

So how bad is it? 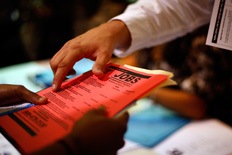 Catherine Rampell writes in The New York Times that “The steep drop was far worse than economists had been predicting. Most estimates expected a loss of only a few thousand jobs.”

The Financial Times headline might have confused even the British: “Weak jobs data raises prospects for more QE.”

But QE is not Queen Elizabeth, rather “quantitative easing,” the Federal Reserve term for, in effect, creating more money to prop up a sagging economy.

Where are we at the end of the day?

Politically, we’re caught between a rock and a hard place. The hard place, associated with the Democratic Party, is the fear of a double dip if we don’t stimulate the economy and produce job growth. The rock is the fear of too much government and government debt if we do stimulate, long associated with rock-ribbed Republicanism, now renascent in the garb and gab of the Tea Party.

Tough place for an economy to be.

This entry is cross-posted from the NewsHour’s Making Sen$e page, where business and economics correspondent Paul Solman answers your questions on economic news. Follow Paul on Twitter.