Setting a new bar for the price of musical instruments

No musical instrument has sold for $45 million, but Sotheby’s announced today that they are starting off the sealed bidding this spring for the “Macdonald” viola by Antonio Stradivari at that price.

Stradivarius string instruments are known in the classical music world as some of the highest caliber. Stradivari made 600 violins and 50 cellos in in his lifetime, but only 10 violas are still around today. The “Macdonald” of 1719 — named after its owner in the 1820s, 3rd Baron Macdonald — is one of only two Stradivarius violas in the hands of private owners, according to a press release from Sotheby’s. The Library of Congress in Washington D.C. owns the other one.

The “Macdonald” is currently owned by the family of Peter Shidlof, a member of the Amadeus Quartet. Shidlof, who died in 1987, purchased the viola in 1964.

Sotheby’s is expecting the instrument to sell for more than $45 million, which is quite a feat when the current world record for the sale of a musical instrument stands at $15.9 mil. That was for the “Lady Blunt” Stadivarius violin, which was sold in June 2011 by the Nippon Music Foundation to help fund earthquake and tsunami relief efforts in Japan.

To learn more about the significance of the viola, Art beat spoke to Samuel Zymuntowicz, a recognized maker of string instruments.

ART BEAT: What makes this viola so special?

SAMUEL ZYGMUNTOWICZ: There’s a presumption that the price or the value of something is intrinsically related to its functional use. Because things are so expensive we assume that they’re the greatest, but that’s not the right way to start. When it comes to auction prices or any kind of collector’s prices, it’s a matter of collectability. It’s with the expectation that when they sell it long after that it’s going to be worth more. It really has the most tangential connection to its actual value as a musical instrument. At that price, it’s outside the realm of any working musician today.

One of the last record auction sales was the “Lady Blunt” Stradivari. It was a beautiful instrument, very rare, very fine condition, but it was presented with totally gut strings like a baroque setup. No one could really play contemporary music on it the way it was setup.

It’s good to keep the different value systems clear in our mind. When talking with musicians, you’re talking utility value, what’s easy to play, what will project well, all those practical considerations of a working tool. When you’re talking of an instrument of this category, you’re really talking about collectible value. If you compare to paintings, it’s not an unreasonable price. I don’t know what a Warhol sells for now, but given the money I’d much rather own a Stratavari than Warhol, personally. As a collectible, it would mean more to me and to me more obvious work of craftsmanship and carries more history. In that context, it’s totally worth the price.

And someone who owns an old violin — who can afford to buy a Strad — is actually getting a pretty good value because there’s a tremendous amount of personal pleasure just out of owning something like that. They become a little mini celebrity just in the music world and famous musicians will come and visit them even if they are not a musician themselves. It’s really a win for a collector.

It’s not a win for musicians. Peter Shidlof was part of the Amadeus Quartet, a legendary group. It’s quite clear that this instrument will not be used in this same way next. So from a certain point of view, this instrument is almost officially leaving the world of working musical instruments. It’s going to be a real break with the way it was used before.

SAMUEL ZYGMUNTOWICZ: I can tell you as a maker, I’ve spent my life studying those instruments and they are in fact great and they have been the model for my own work, but I’ve also seen from personal experience, depending on how they are set up, they can be better or worse. A lot of them are not that great or not that great for every circumstance. I know from day to day experience that old violins including Strad’s are not necessarily better for practical performance. They may or they may not be. They’re great violins, but they are violins that are very old and have been through the mill. Some are in great shape, some are not.

ART BEAT: The vice chairman of Sotheby’s noted that unlike many other rare objects at their auctions, this viola needs to be played. Is the wear and tear of contemporary use a concern for the instrument?

SAMUEL ZYGMUNTOWICZ: There are lot of Stradivarius in very active use. People have them in their case, they’re schlepping through airport security every day, putting it in the back seat of taxis, and playing a hundred concerts a year and sweating on them and they’re holding up. On the other hand, the wear and tear does take a toll a little bit on these instruments.

When you have something that’s in really pristine condition like the “Lady Blunt” was at the last auction of a Strad — it was really something that had been used very seldom. Whether or not it was a great violin is sort of beside the point; it was a great specimen. It would be sort of a pity if someone turned that into a gig violin and started playing concertos with orchestras 100 times a year. It would start to wear.

For an instrument that is very pristine, you could say that its highest and best use is as a collectible and preferable something that could be played on occasion and could be studied and serve as a benchmark that you could judge other current work by.

What’s ironic is that the Stadivari violas are, well they are very rare for one thing, but they are not as sought after as his violins. His violins have really formed the archetype that most people have studied and followed. His violas are a little more cramped and they are not a very broad sound in general. There are so few that it’s hard to say that they would be more in use. Just as a maker myself, I have never chosen Stradivari violas to model instruments after because they are a little narrow and there are other instruments by Amati and other makers, with a more generous proportion and give it a richer sound. Purely speaking as a musical tool and generally speaking, Stradivari viola is not the most ideal you can think of. 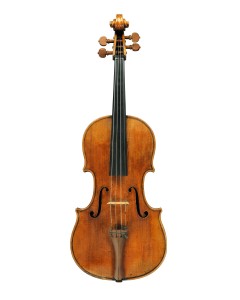 ART BEAT: Do you think this is the best use of funding for the arts?

SAMUEL ZYGMUNTOWICZ: The New Jersey symphony a number of years ago bought a collection of old Italian instruments that was owned by Herbert Axelrod, and it was a big deal, it was in the press a lot, and (they paid $18 million). The collection was supposed to be worth far, far more than that (initial estimates put the collection at $50 million) and the patron was going to sell it to them for cut rate because he was fond of them and they scraped to buy those instruments. They made a big fundraising campaign and they finally were able to buy them. They were hoping it was going to bring in a lot more patronage and interest. And then as the story unfolded it turns out that the instruments were not all that they were supposed to be and the value had been inflated; it did not bring in all that much extra support or interest and it actually was just kind of a boondoggle in the end. They wound up selling the collection (for $20 million) just to kind of get out from under the debt.

To kind of reiterate the point, you want to separate the types of value. If collectors want to spend that much money for these kinds of things, there’s no one to stop them, right? But for musicians, or orchestras, to indenture their future for something that actually doesn’t have that much magic in it — people want the magic but they’re not magical, they’re great human works.

In one sense classical music is like this luxury consumable. If you go to concerts, it’s mostly an older crowd and if you ever listen to classical music radio, it tends to be the commercials are all for investment firms, cruises, restaurants, just things that are part of a luxury lifestyle. But that has nothing to do with the art of classical music and has nothing to do with the years that people put into perfecting their playing and why they play music. I think for the musicians, I think a wiser choice is to sort of break away from this being a little part of this patronage luxury machine and sort of have more independence as an artist by playing an instrument that they can afford and own and alter to suit.

ART BEAT: Why has the value of these instruments increased so drastically in recent years?

SAMUEL ZYGMUNTOWICZ: Well, they’ve always been owned by, for the most part by wealthy individuals. And if you look at the names of a lot of these instruments, they’re named not so much for musicians but more often for famous collectors of violins. The market’s been handled by an elite group of dealers and sold to a very small group of wealthy individuals for the most part. You don’t need many people to sell them to and there’re not many people who are selling them and the people who are handling the sales are making sure the prices are going up.

Left: The "Macdonald" was crafted by Antonio Stradivari in 1719. Photo courtesy of Sotheby's