From Shakespeare to Sappho: Read the stories behind three artifacts of genius

The Morgan Library’s “Marks of Genius” exhibit in New York City features nearly 60 works — both well-known and obscure — that help to illustrate what we mean when we say the word “genius.”

The collection comes on-loan from the Bodelian Library at Oxford University in England, which since 1610 has received a copy of every book published in the United Kingdom. The collection currently at the Morgan spans both history and the globe.

Here are just a few pieces from the “Marks of Genius” exhibit. 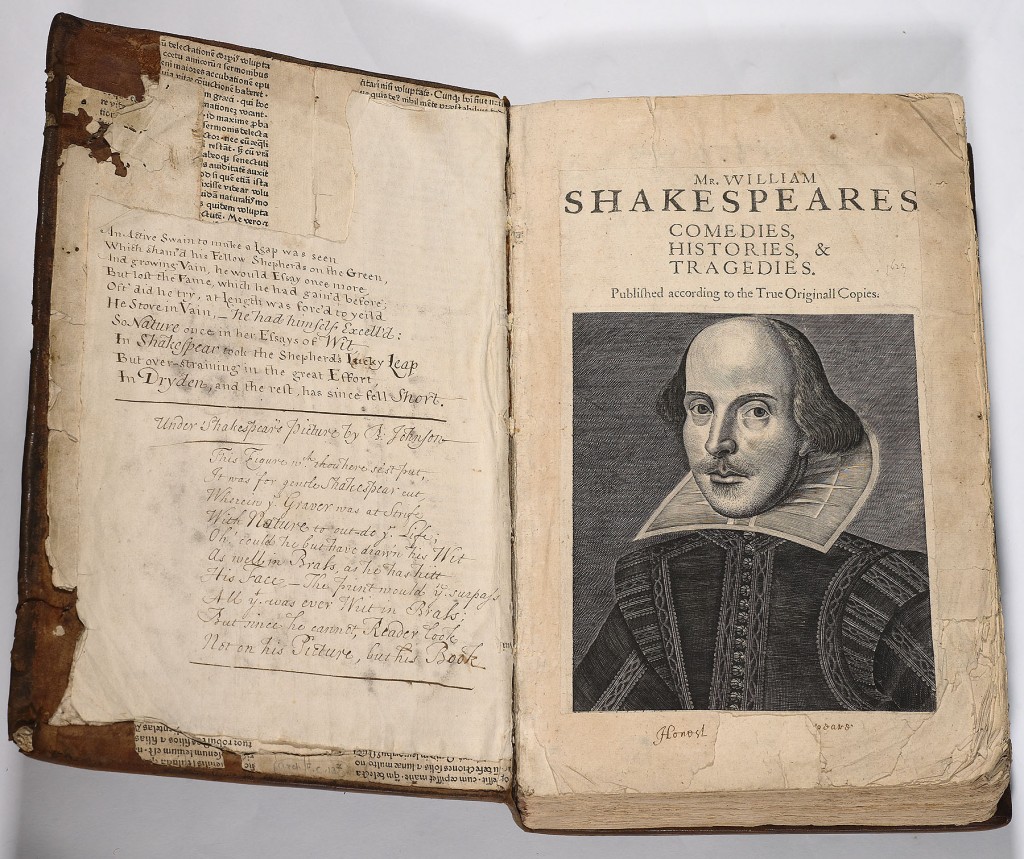 Although many of William Shakespeare’s plays had been published individually during his lifetime, the First Folio — published seven years after his death in 1623 — marked the first time that a collected edition of his works was printed.

Of the 36 plays that were included in the manuscript, half of them had never been in print before. Without the First Folio, it’s very likely that plays such as Macbeth, Julius Caesar, The Tempest, Twelfth Night, and As You Like It would have been lost to us forever.

The copy of the First Folio on display at the Morgan was the one originally given to the Bodleian Library at Oxford, England in 1623. However, just over forty years later, it left the Bodleian’s shelves for over two centuries.

According to John McQuillen, the curator of the “Marks of Genius” exhibit, the Bodleian sold their copy of the First Folio around 1664 when the Third Folio of Shakespeare’s plays was printed. “It was, in 1664-eyes, a better edition,” said McQuillen. “It was modern. It was brand-new. Why keep your old book around?”

The Bodleian’s First Folio remained in private hands for many years after that and its whereabouts were unknown until 1905, when it suddenly popped up in the hands of an Oxford undergraduate who had taken it to the Bodleian Library to ask for advice about having it rebound.

Once word got out about the recently discovered manuscript, an anonymous buyer offered the owners a bid of 3,000 pounds to purchase it (over $531,000 by 2014 standards). The owners offered the Bodleian the chance to match the offer, but lacking the funds to match such an extraordinary sum at the time, the Library decided to launch its first public fundraising campaign.

Although Oxford graduates were approached about donating to the campaign, many of the donations came in the form of small sums from people with no connection to the Bodleian Library at all, both from the United Kingdom and from US. “It was… what you might call an early ‘Kickstarter’ campaign,” McQuillen said.

Through these donations, the Bodleian was able to raise enough money to purchase back the book that had been lost to them for nearly 250 years.

And the anonymous buyer who offered the initial astronomical sum? He was later revealed to be Henry Clay Folger, who would go on to found the Folger Shakespeare Library in Washington, DC, which houses the largest collection of First Folios in the world. 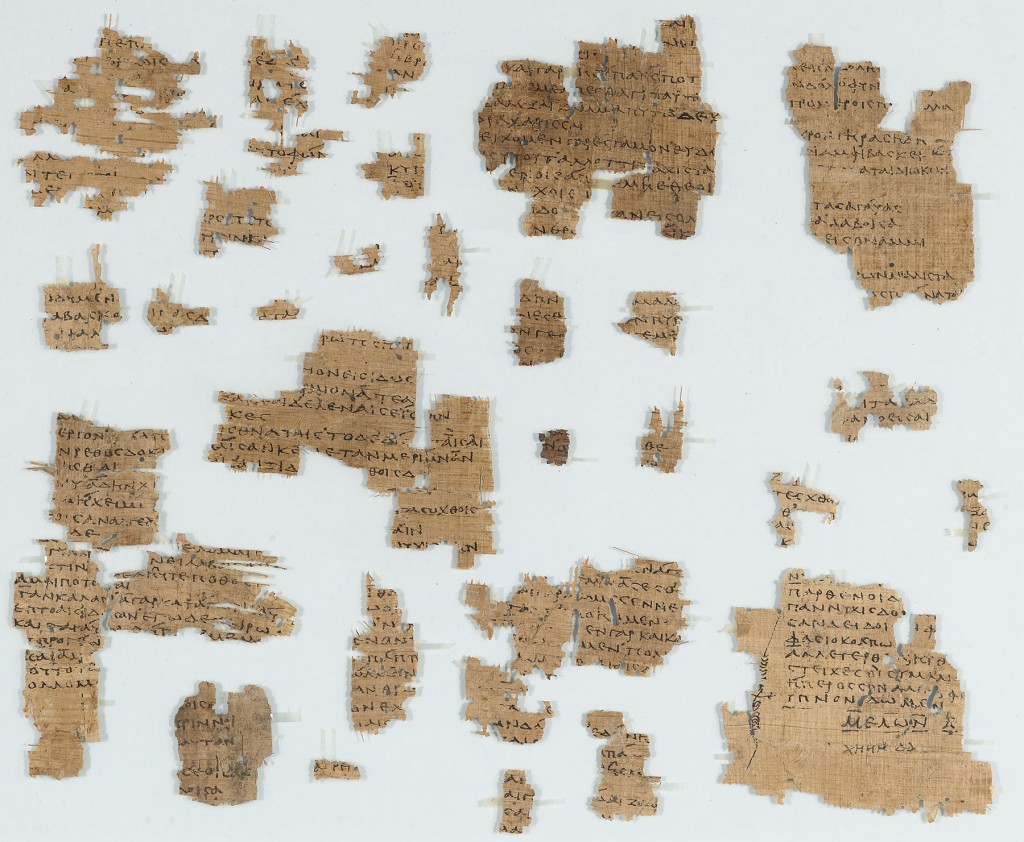 Sappho fragments are only known work remaining from the lyric poet

The seventh-century BCE Greek lyric poet, Sappho, was described in antiquity as “the Tenth Muse.” She is said to have written around nine books of poetry, but most of her work has been lost to time.

Though they were produced centuries after her death, these scraps of papyrus now on display at the “Marks of Genius” exhibition are some of the only known work of Sappho’s that remain — and they were found in a rather inauspicious location. Archaeologists in 1897 discovered them in an ancient trash heap near a small Arab village in Egypt.

McQuillen suggests that the reason that the work of one of the most celebrated poets of her time should be discarded in such a fashion may be because the popularity of Sappho’s style of poetry had begun to falter.

“Her dialect of Greek was not taught in schools anymore and the interest in… ancient Greek lyric poetry sort of waned. And so, through both of those things, Sappho wasn’t read or studied anymore, and so she then tended to end up in trash dumps.”

The following is a translation of some of the lines from these few fragments, without which, McQuillen said, “we wouldn’t have them at all.”

For some, it’s an army of chariot fighters, for others, an infantry corps,
For others, an armada of sailing ships, on the dark face of this earth,
That is the loveliest thing of all, but I say it’s this and nothing more:
Whatever you desire with love in your heart.

I would rather watch her love-provoking stride
and witness the bright sparkle of her face
than all the war chariots of the Lydians
and shield-fighting armored men.

See more more on the Bodleian’s website, including audio of these lines recited in both English and Greek. 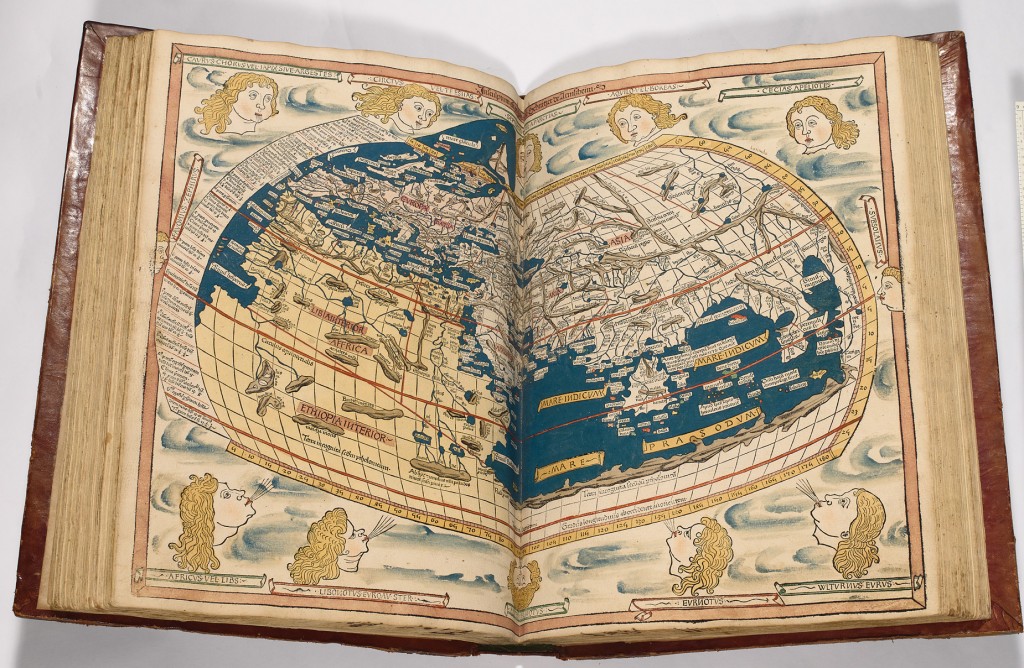 During the time of the Roman Empire, the Greco-Egyptian geographer and astronomer, Ptolemy, wrote what would become the basis for all geographic knowledge throughout the Middle Ages and the early modern period. This map is part of a book published in Germany in 1486, and it illustrates Ptolemy’s calculations of what the world looked like.

But of more fascination to some may be who once owned this particular copy of this book. It once made up part of the library of King Ferdinand and Queen Isabella of Spain, who funded Columbus’s 1492 expedition to the East Indies, which lead to the European discovery of the New World.

Ferdinand and Isabella gave this book to the Venetian ambassador to Spain in 1495, but McQuillen suggests that before that, it may have had some influence on Columbus’s journey.

“This book was actually in their library in the 1490s… It would have been available for them to look at, for Columbus, if it was something that was shown,” he said. “An image like this might have, you know, been something Columbus had seen, if not this very book, but at least something that could have inspired… his journey to the West.”

Even though, from a modern standpoint, this map has become completely inaccurate (North and South America are missing and Africa’s southern tip disappears from the map, looping around back to Asia and thereby turning the Indian Ocean into a large lake), McQuillen said that it illustrates how new knowledge builds on top of findings and discoveries that came before it.

“What Ptolemy did was set the foundations for all geography thereafter,” he said. “You need one person to start the ball rolling and then you can build on that. And that’s what genius does… It builds on the shoulders of your forbearers.”

For more works from the “Marks of Genius” exhibition that show how genius is inspired by its predecessors, visit the Bodleian Library here.

Zachary Green began working in online and broadcast news in 2009. Since then he has produced stories all over the U.S. and overseas in Ireland and Haiti. In his time at NewsHour, he has reported on a wide variety of topics, including climate change, immigration, voting rights, and the arts. He also produced a series on guaranteed income programs in the U.S. and won a 2015 National Headliner Award in business and consumer reporting for his report on digital estate planning. Prior to joining Newshour, Zachary was an Associate Producer for Need to Know on PBS, during which he assisted in producing stories on gun violence and healthcare, among others. He also provided narration for the award-winning online documentary series, “Retro Report”.