How performers of color are ‘revolutionizing’ burlesque

Video shot and produced by Jordan Vesey and Matt Ehrichs.

“This is where it all happens,” says Chicava HoneyChild as she opens the door of her dressing room and ushers us inside. She removes her floor length fur coat and hangs it on a wire rack filled with costumes.

It’s three hours before showtime, and performers apply makeup and fake eyelashes along a wall of mirrors bordered by exposed frosted bulbs. In one corner is an oversized bouquet of fake yellow flowers and a worn upright piano. Splayed out on two couches are parts of an elaborate glittering headdress, two silk fans, and a six-foot-tall sunflower prop.

Suddenly, the performers start to disrobe, changing into costume. My colleague blushes and asks if he should give them some privacy.

“You do know you’re here to film burlesque right? This is kind of what we do,” one woman jokes, snapping her rhinestone bra into place.

This is Brown Girls Burlesque, a New York based burlesque company for women of color with a mission to “entertain, educate, titillate and liberate.” 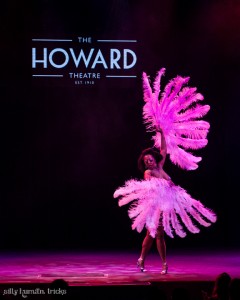 “Hot-cha girls.” “Strip tease darlings.” “Exotic dancers.” These are just some of the words producers have used to bill burlesque performers over the years. Decked in sequins, glitter, and six-foot ostrich feathers, the glamorous vixens of the vintage nightclub know how to captivate our attention. Burlesque dates back to the mid 19th century, but it experienced a decline in the 1970s and 80s. In the past 20 years, the so-called “neo-burlesque” movement has seen a resurgence in popularity. Neo burlesque companies are often run by women, for women, and frequently incorporate contemporary attitudes about feminism and sexuality into their acts. The artform has cultivated a devout following in cities across America.

While some have dismissed burlesque as little more than glorified stripping, defenders of neo-burlesque say it is about reclaiming society’s objectification of women. It’s not what you’d see at a stripclub — dancers remove clothes, but never get completely naked. They use costumes, music and parody to tell stories. Some shows are intellectual, some are political, and some are pure comedy.

Recently, neo-burlesque companies have emerged, devoted specifically to showcasing performers of color. Chicava HoneyChild is the proprietress and creative producer of one such company: Brown Girls Burlesque in New York City, which was founded in 2007.

This modern practice of burlesque stands in stark contrast to burlesque in the early part of the 20th century. During the Victorian era, burlesque appeared in the third act of a musical variety performance, featured alongside minstrel shows and vaudeville comedy routines. Performers would usually use farce to satirize common political beliefs or literary works. The term burlesque comes from the Italian word burla, referring in theater to a practical joke or comedic interlude in commedia dell’arte performances. It was a highly profitable form of highbrow theatrical entertainment.

Since the mid 19th century, African-American performers have been part of the vaudeville, minstrel and burlesque traditions in America. Yet these forms of entertainment often parodied and trivialized the African-American experience for cheap laughs. In the 1920s, “Black and White” burlesque revues became popular, with one act featuring white performers and the other act black performers. Performances were as segregated as America was at the time. 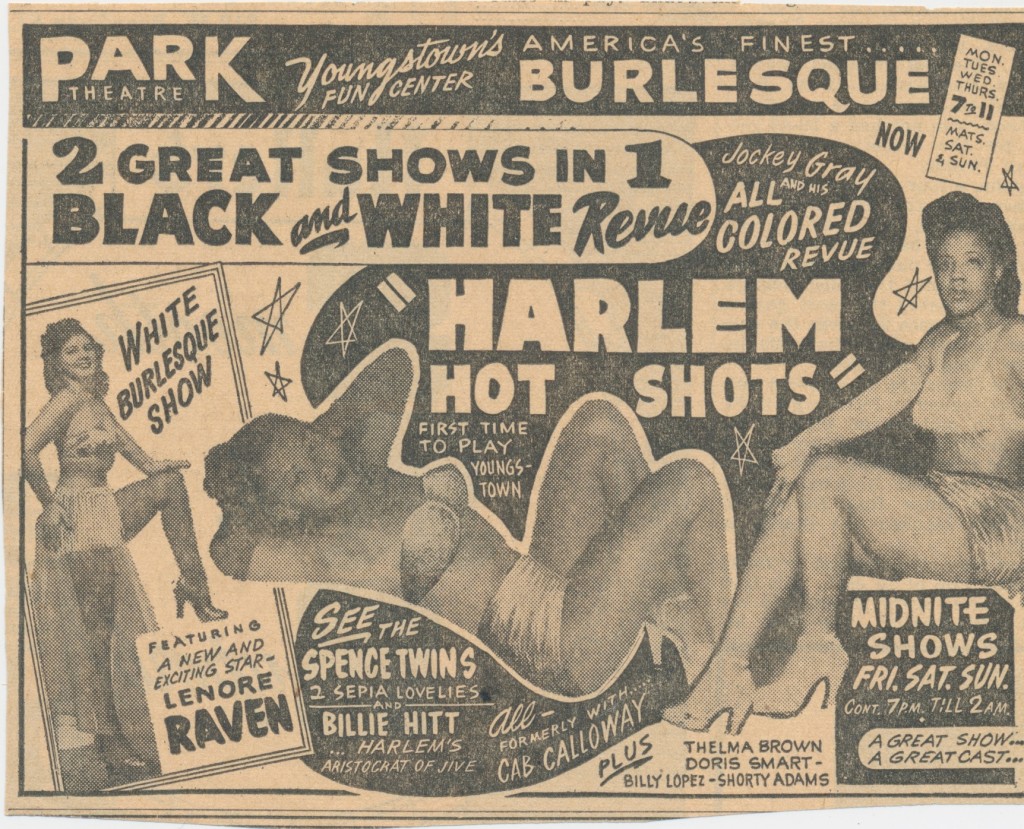 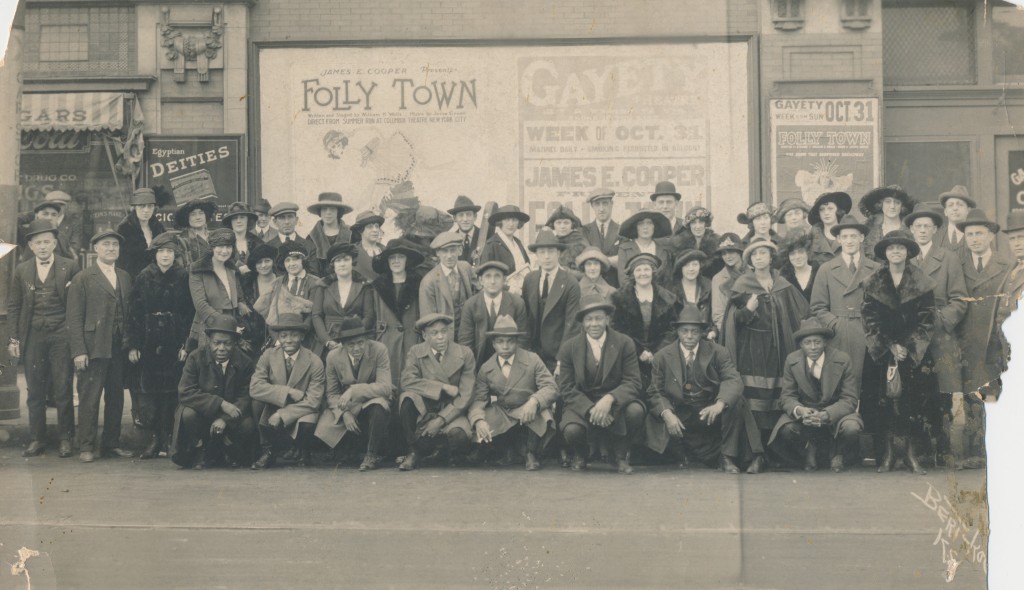 As audiences integrated, white troupes began to hire one or two performers of color that they could bill as “featured attractions.” However, these burlesque dancers were publicized as “exotics” with producers using descriptors like “jungle fever” or “voodoo mistress” on posters and playbills. Frequently, women of color were only booked if they performed acts which reinforced racist stereotypes. 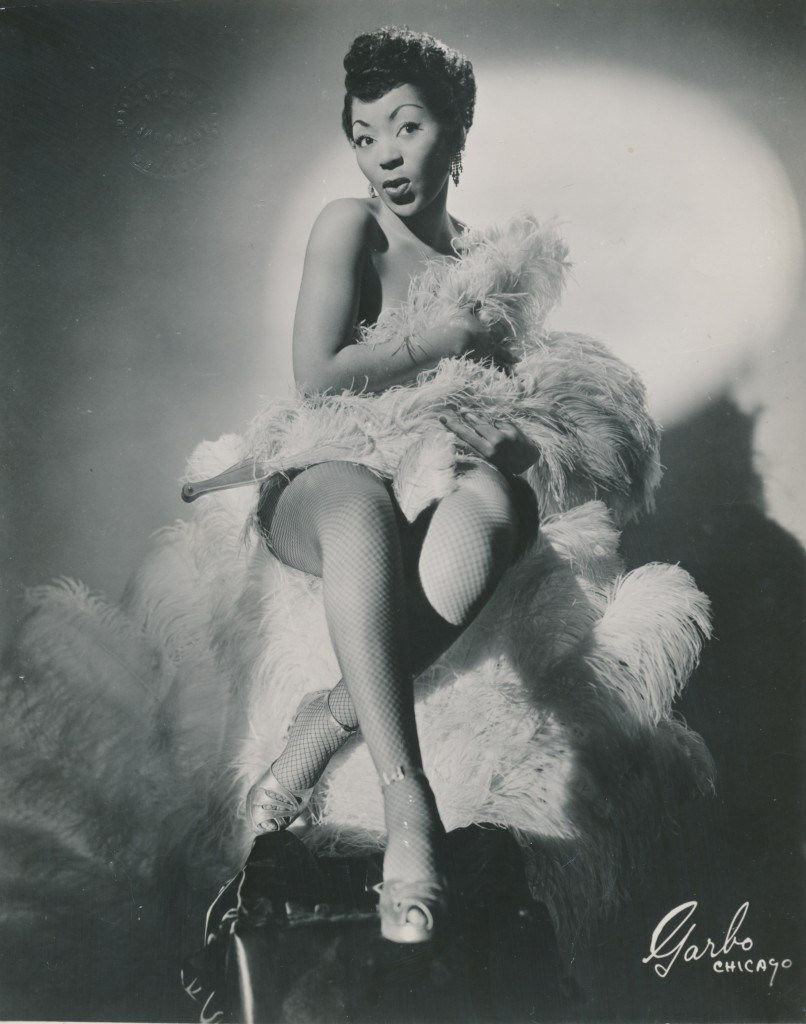 Jean Idelle, one of the first African-American women to perform in an all-white burlesque troupe, poses for the camera.

Given this historical context, the inclusion and celebration of performers of color within the current neo-burlesque landscape remains contentious. Brown Girls Burlesque was established in part due to the lack of diversity in the burlesque scene.

What once was a form of seedy entertainment is now, supporters say, being transformed into performance art. For many burlesque dancers of color, the striptease has been reclaimed as a declaration of independent womanhood, body positivity, and self-love. Many performances are intended to create discourse about serious topics like race, sexual identity, and gender through the naked female form, performers say.

“For black women–sexualized or other–to intellectually take to the stage and own yourself, that is very revolutionary,” HoneyChild said. “The African-American woman’s experience in America is very much one of sexual dominance or of being dominated. And so to perform and take that back and have that expression is a political act.”

One of HoneyChild’s favorite pieces to perform is called “Jezebel.” The dance tackles the practice of placage, a recognized system in 18th century Louisiana, in which French and Spanish men entered into common-law marriages with women of African and Indian descent, known as placeés. Under legal contract, white men would pay for the education and living costs of any offspring conceived by the union. These unions, also called “left hand marriages,” led to the creation of a prominent middle class of free people of color in Louisiana.

In her performance, HoneyChild plays Jezebel, a creole placeé getting ready for a night with her white suitor. A maid waits on her, indicating the middle class stature that placeés enjoyed during the antebellum period. HoneyChild’s performance juxtaposes Jezebel’s social and economic freedom with her role as a concubine considered inferior to white women. The performance is meant to show how the economic stability and freedom of these women of color was frequently tied to their sexual commodification. As such, the striptease is a profoundly bittersweet testament to the endurance of survival.

Other Brown Girls Burlesque performers have taken on more contemporary political issues. The Japanese-Jewish performer ExHOTic Other explored the immigrant experience in a showcase entitled “Culture Classics.” She performs a striptease to “God Bless America” until she is wearing nothing but a sign hanging from her neck that says “A Brown Body.” She yanks at the sign, pulling it off to reveal another that says “The Enemy.” Her demeanor changes from triumphant to sad to angry as she pulls off sign after sign, each more insulting than the next. Suddenly she frantically looks for her clothes, covering her body with her hands. She then climbs into an orange jumpsuit and tries to lift the U.S. flag above her head, struggling as if it were a heavy weight. She finishes the act by tangling herself in the flag until it chokes her and she falls to the ground, dead, as the national anthem swells.

“Sometimes when things are very painful, like the legacy of slavery in America, the only way to work through them is to laugh at them. To turn them into something not so intimidating and painful,” said Dainty Dandridge, one of the founders and performers of Chocolate City Burlesque and Cabaret, an all-black burlesque troupe founded in November 2014 in Washington, D.C. “Burlesque felt like a way for me to take that and own it and break it apart.” 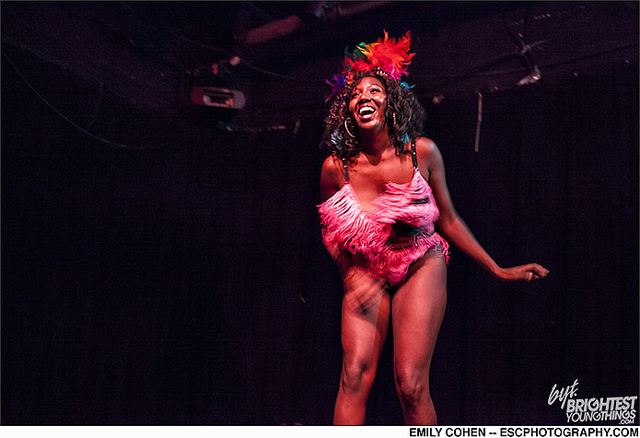 Che Monique, a co-founder of the troupe and one of its performers, said she often goes to burlesque performances where she doesn’t relate to the humor or music. Brown Girls Burlesque was different.

“I went to one or two Brown Girls Burlesque shows, and they were legitimately life-altering,” she says. “Black people don’t even know that burlesque could be for them. It has to speak to you and include you potentially before you can even go out and be a part of it.”

Both Chocolate City and Brown Girls Burlesque were originally founded as a response to the lack of opportunities for women of color to perform within neo-burlesque communities.

Monique said she was drawn to create a burlesque community specifically produced by and for women of color.

“It is challenging with burlesque, because burlesque is all about fantasies, right?” she said. “But most of the tropes we have about fantasies are absolutely racist. Like any ‘Arabian Nights’ fantasy, or any harem fantasy, any geisha fantasy. Maybe they are not racist inherently, but they are definitely racially and culturally charged.”

Back at Joe’s Pub at the Public Theater, the audience is whistling and clapping. Two couples on a double date inch closer together in their red velvet booth. A group of women in the front row can’t stop laughing as the dancer on stage throws her clothes at them. Now she is kneeling on the floor, bending backward, shimmying with her whole body. Four burlesque performers who have already completed their acts are dancing semi-clothed in the aisles of the theater.

“I don’t want to see any of you in your seats. Get up and dance!” HoneyChild says over the mic.

Everyone at the first row of tables in the pub stands up, clapping to the rhythm of the bass. The chandeliers on the ceiling shake, and the champagne flutes wobble on the tables.

“I want to help young girls hold themselves differently, not place the judgement of their value in other people’s hands,” HoneyChild told us. “If you give me a teenager, I will give you back a very difficult woman, with very high standards.”