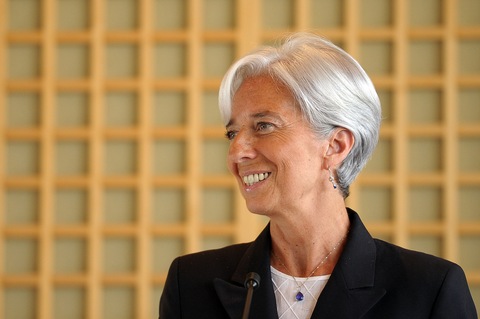 So the synchronized French swim champ with accent-free English whom we interviewed last summer in Paris, Christine Lagarde, will run the IMF. What did we learn from that interview?

That she was a key architect of the European bail-out plan last year, a plan now in the process of re-implementation. Back in July I asked her, “How serious is the threat to the world economy right now? Spain, Greece, Eastern Europe, Portugal, all tremendously weak.”

Her response: “I’m always cautious, and I’m always very attentive to the unknown risk, because I strongly believe that the risk is going to come from somewhere unexpected.”

Paul Solman: How bad is the threat now?

Christine Lagarde: What we have done for Europe at large I think is a very massive plan, totally unexpected, totally counter-treaty, because it wasn’t scheduled in the treaty that we should do a bailout program, as we did.

Paul Solman: This is this May 9 bailout that you did. I think you said at one point this was the most expensive night in the history of the world.

Christine Lagarde: That’s right, that’s right, because we had essentially a trillion dollars on the table to confront any market attack that would target any country, whether it’s Greece, Spain, Portugal, or anybody within the Eurozone.”

The above exchange prompted the most relevant question as she becomes only the eleventh permanent Managing Director of the IMF since World War II. I followed up:

Paul Solman: “So, you’re not worried that there’s an imminent threat to the global economy at the moment? You wouldn’t tell me if there were, I don’t guess, but…

Paul Solman: Economically, France vs. Germany seems to mirror the main sort of economic issue of our times, or of right now, which is stimulus vs. austerity, or bailouts vs. budget cuts.

Europe can’t do both, can it? It can’t do everything.

Christine Lagarde: Yes, it can. We always we have to strike the right balance between continue to stimulate. And most of us still have a little bit of stimulus under our foot in order to accelerate that fragile growth that has picked up in 2010.

But, at the same time, we must, very decisively, cut our deficit and reduce our debt.”

A year later, there’s again talk of European banks holding bad sovereign debt. If Lagarde was worried at the time about the solvency of French banks, she was behaving like a responsible finance minister and not letting on. My question:

Paul Solman: “French and German banks hold a lot of Spanish and Greek debt. You don’t worry about them?

Christine Lagarde: As I told you, I’m minister of economy and finance.

Christine Lagarde: I worry all the time, but I don’t worry specifically about my banks.

And then came the one surprising, and perhaps revealing, moment of the session. Unsolicited by any question, Lagarde simply blurted out:

“Nobody wants to take my job at the moment, you know.”

“You have got to keep smiling, even when it’s hard. Grit your teeth and smile. That’s what I was told when I was much younger.”

One final thought, closer to home, from past interviews with heads of the IMF. In 2004, I asked Spain’s Rodrigo Rato, just then taking over. He had called on the U.S. government to reduce its budget deficit. I asked why. Said Rato:

“Because the budget deficit is creating a situation in which the United States is not saving enough to finance its own investment. And it’s also producing a growth in debt to the United States that will weight very heavily in a country that has to address issues like having more old people to be covered by Social Security or by pension in the future.”

“Did the United States get into the trouble it got into by not listening to the IMF?”

“Well, I don’t want to be pretentious, and I think that we were not as good as we should have been in preventing the crisis and forecasting the crisis [of 2008]. Having said that, we’re probably the institution which was really the first one putting the fingers on what’s not going well, subprime market, for instance; then, when the crisis began, the first institution saying the crisis is going to be very difficult.”

Will Lagarde now lecture the U.S. on fiscal responsibility? Will she consolidate the Euro-bailout that Strauss-Kahn (and she) were so pivotal in cobbling together last year?

She’ll have more credibility to do so than most.