Exceeding the Walt Disney Company’s pre-weekend expectations, J.J. Abrams’ seventh installment of the widely popular saga grossed an estimated $238 million in the U.S. and Canada and had the second-biggest start of all time worldwide ($517 million), behind this summer’s “Jurassic World” ($524.9 million), which pulled in $208.8 million domestically in June.

“Our sole focus has been creating a film that delivers that one-of-a-kind Star Wars experience, and director J.J. Abrams, Lucasfilm President Kathleen Kennedy, and the Lucasfilm team have outdone themselves,” Walt Disney Studios chairman Alan Horn said in a statement.

Even when adjusted for ticket price inflation, The Force Awakens is the biggest domestic December release of all time, according to Box Office Mojo. And with it’s opening weekend success, 2015 now has three of the top domestic opening weekends of all time, with “Jurassic World” and “Marvel’s The Avengers.” 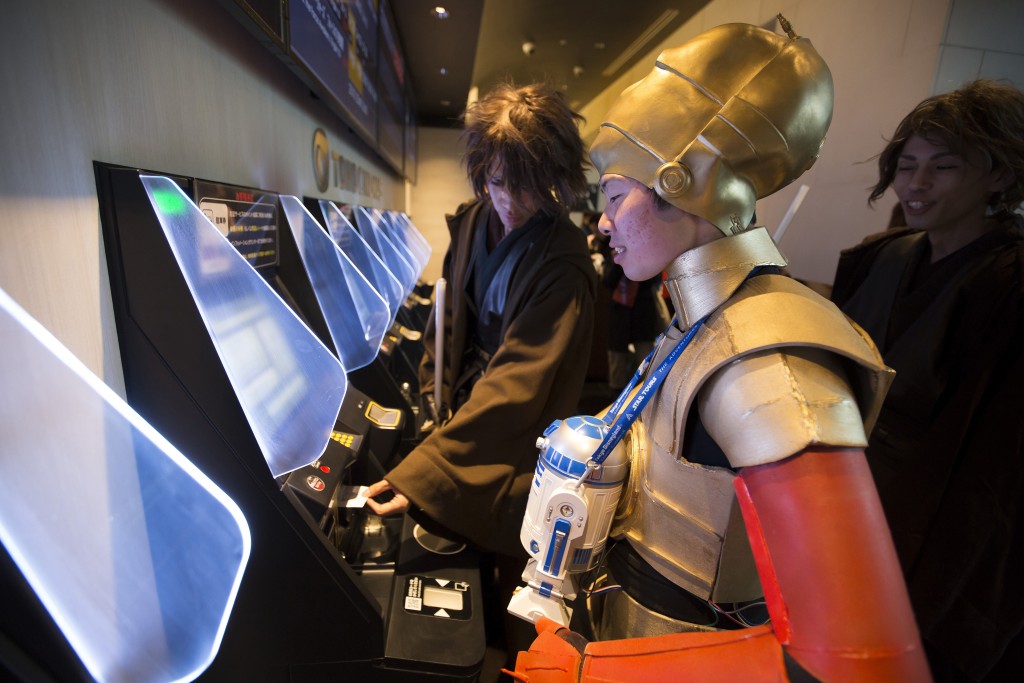 A fan dressed as C-3PO purchases a ticket from a self-service machine ahead of the first public screening of Walt Disney Co.’s “Star Wars: The Force Awakens” at TOHO Cinemas Roppoing Hills in Tokyo, Japan, on Friday, Dec. 18, 2015. Photo by Tomohiro Ohsumi/Bloomberg via Getty Images.

The J.J. Abrams written and directed film, which picks up where the 1983 classic “Return of the Jedi” left off, is playing in more than 4,000 theaters in the U.S. and began its record-breaking run by making more than $57 million in ticket sales for early Thursday night showings.

The film is expected for gross $1.5 to $2 billion globally, according to the LA Times.

Another four franchise films are expected to follow “The Force Awakens” over the next four years.

The film opened in dozens of countries this week, but won’t hit the world’s second-largest film consuming market — China — until Jan. 9. 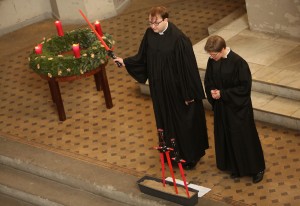 Vicars Lucas Ludewig and Ulrike Garve hold a church service centered around the 1983 film ‘Star Wars Episode VI: Return of the Jedi’ at the Zionskirche on December 20, 2015 in Berlin, Germany. Photo by Adam Berry/Getty Images.

Throughout the weekend, Star Wars mania struck devoted fans around the world.

Diehard fans camped out for more than a week before the film’s premier in Hollywood; members of the Intergalactic Krewe of Chewbacchus stormed the French Quarter in New Orleans; priests in Berlin held an Evangelical Advent church service centered on “Return of the Jedi,” incorporating the film’s Biblical parallels of good and evil to the service; and, of course, fans all over showed up to theaters in full costume.

Even Democratic frontrunner Hillary Clinton took part in the craze, closing her third presidential candidate debate appearance with a Star Wars reference: “Thank you, good night, and may the force be with you,” she said to cheers from the audience.

Stephen Fee contributed to this report.

Left: A character in costume takes part of an event held for the release of the film "Star Wars: The Force Awakens" in Disneyland Paris in Marne-la-Vallee, France, December 16, 2015. Photo by Benoit Tessier/Reuters.