‘There still is a lot stacked against us’: Ferguson inspires year of art

In the year since 28-year-old white police officer Darren Wilson fatally shot black 18-year-old Michael Brown in Ferguson, Missouri, the details of the confrontation, including whether Brown had his hands up when he was shot, continue to be debated.

Brown’s death on Aug. 9 and a grand jury’s subsequent decision not to indict Wilson spurred nationwide protests. But it also inspired creative responses from artistic communities both within St. Louis County and across the country.

On the night of Brown’s death, 26-year-old Danez Smith, a poet from Minnesota, said he wrote “Not an Elegy for Mike Brown” in about 20 minutes.

Smith said he wrote the poem “out of fury” because he was “tired and emotionally drained from all that black people were already going through nationally.”

think: once, a white girl
was kidnapped & that’s the Trojan war.
later, up the block, Troy got shot
& that was Tuesday. are we not worthy- excerpt from “Not an Elegy for Mike Brown” by Danez Smith

Smith, who won a Lambda Literary Award for Gay Poetry, said when we look back on history, we can look to art to find out more about the emotions surrounding a particular event or tragedy.

“We can think about how something like slavery might have felt, but until we read slave narrative, we don’t actually know what it felt like to be in that situation,” he said.

After Smith posted the poem to Facebook, it has since been used in school curricula to teach young people about the events in Ferguson.

Video from the Button Poetry YouTube channel, used with permission.

In St. Louis, visual artist Dail Chambers sought to document what happened in Ferguson through quilting. Chambers, who founded the Yeyo Arts Collective, solicited fabric pieces from around the country.

About a hundred hands made out of fabric came in — too many to fit on one quilt — so she worked on several.

She also traveled to Ferguson, where her grandmother lives, to work on a quilt with young people at Greater St. Mark’s Family Church through the organization Bread & Roses.

“Even though Mike Brown is the reason why we’ve been working out there,” she said, “their [young people’s] eyes are on the bigger issues, like ours, like why are these disconnections happening in the schools, with food, with housing?” 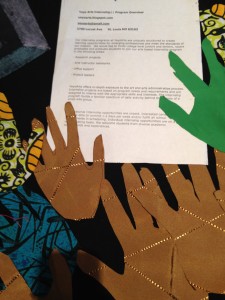 Fabric hands that came in from around the country for the quilts. Image provided by Dail Chambers

Wheaton learned of the shooting on Aug. 10, while returning home from a road trip. The artist, gallerist and retired attorney contributed a mixed media assemblage to the show titled “Mourning in America” to “acknowledge the loss of mothers in these situations, Michael Brown’s mother in particular,” she said.

“The unrest in Ferguson happen during this period and Kevin decided to wear the HANDS UP shirt during his artist reception [at 10th Street Gallery],” Thurman, Jr. told PBS NewsHour in an email.

“My son, Officer Solomon Thurman III, and Kevin developed a close friendship as a result of much Q & A from Kevin. I wanted a picture of them in front of the gallery and they spontaneously embraced, which I thought was very profound,” he said. 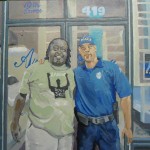 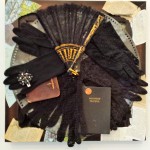 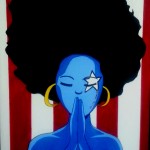 “Black and Blue” by Alan Johnson 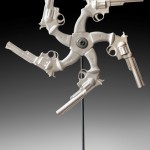 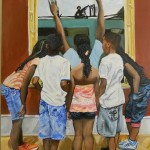 “In the Collection” by Lenard Hinds 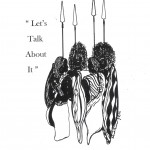 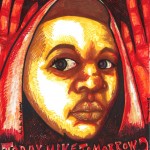 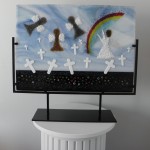 “Wispy Angels from Despair to Hope” by Doretha Washington 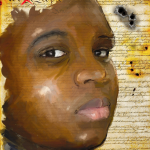 From the series “We Are The People” by Howard Barry 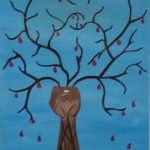 In New York, Brooklyn’s The New Black Fest commissioned monologues about Ferguson from emerging black playwrights. The 10 to 15-minute long readings were performed at the City University of New York’s Graduate Center under the title, “Hands Up: 6 Playwrights, 6 Testaments” in November 2014.

“All of the work is in response to Ferguson or the state of the black male in this country,” Keith Josef Adkins, The New Black Fest’s artistic director told the New York Times.

In the city’s borough of Queens, two artists created a multimedia installation that simulated an encounter with police. As part of the artists’ interpretation of a high-emotion, high-stress encounter with police, visitors to the Flux Factory in Long Island City were asked to step into a space with flashing lights and police sirens and put their hands up. The sound of gunshots followed.

“The goal wasn’t to recreate the events in Ferguson, but rather to create a situation that would generate empathy in those who may not have experienced charged encounters with law enforcement or authority figures,” Vasudevan told PBS NewsHour by email.

She added: “Seeing people step up and respond to these incidents, both vocally and artistically, encouraged us to want to contribute our voices using the media we both knew best.”

HANDS UP from Roopa Vasudevan on Vimeo, used with permission.

Some of the artwork inspired by Ferguson, including the “HANDS UP” installation, have proven to be controversial.

The head of the union representing NYPD officers spoke out against the Queens exhibit in May, the New York Daily News reported.

“This so-called ‘art project’ is based upon a lie and perpetuates a falsehood about police officers and their use of force,” Patrick Lynch, president of the Patrolmen’s Benevolent Association, told the Daily News then. 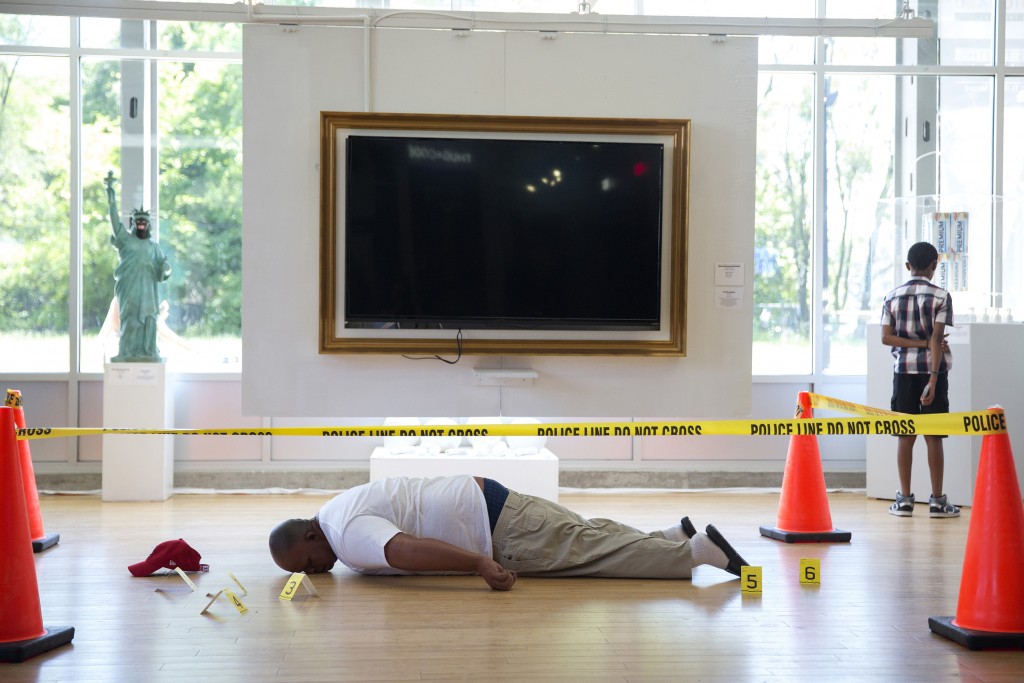 A visitor stands near the art installation depicting a life-size replica of the body of Michael Brown and the crime scene where he was shot by police officer Darren Wilson in Ferguson, Mo. at the “Confronting Truths: Wake Up!” exhibition on July 12, 2015 in Chicago. Photo by Erin Hooley/Chicago Tribune/TNS via Getty Images

New Orleans artist Ti-Rock Moore was also criticized for her installation, pictured above, that recreated the crime scene with a face-down life-size replica of Michael Brown’s body, according to the Chicago Tribune.

Brown’s father, Michael Brown Sr., spoke out against the work in a local news interview, although his mother, Lesley McSpadden, attended the show’s opening, the Tribune reported.

A year after Brown was killed, both Smith and Wheaton say they have seen examples of improvements in race relations and policing. Smith said he is particularly encouraged by the fact that the events in Ferguson continue to inspire a national dialogue on these issues.

“The road toward making a difference is a little straighter,” Wheaton said, adding that “there certainly have been changes in the judicial environment in Ferguson in particular.” 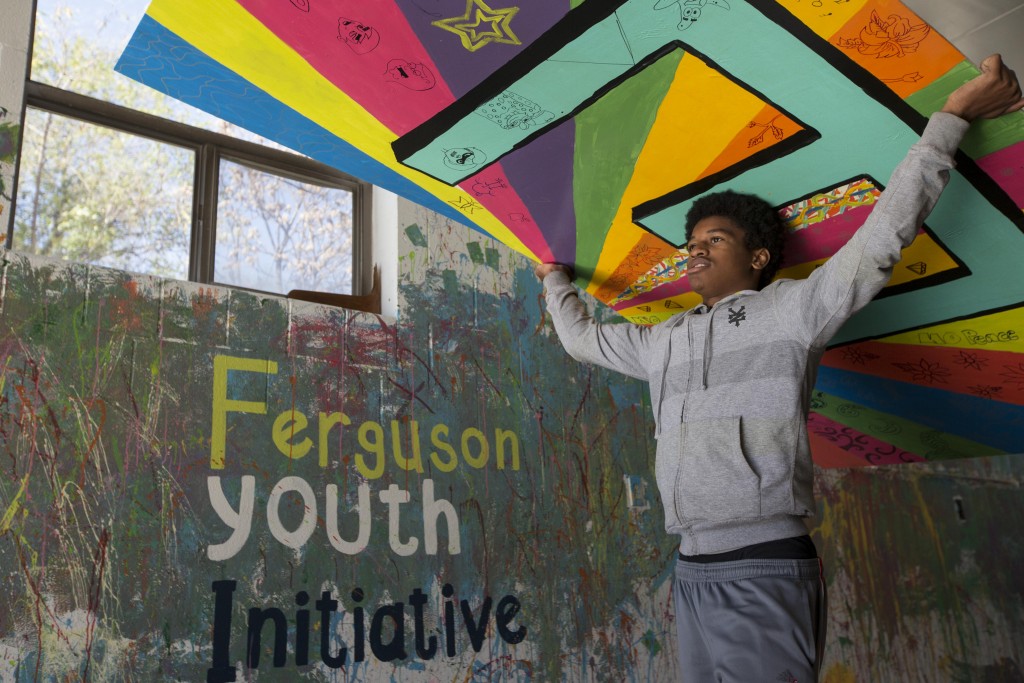 A student moves sections of a mural outside on Nov. 1, 2014 in Ferguson, Missouri. The community art project was organized by Ferguson Youth Initiative, a nonprofit organization developing programs for young people in the St. Louis suburb. Photo by Whitney Curtis for The Washington Post via Getty Images

Ferguson now has a new city manager and municipal court judge, a new interim police chief, as well as a citizen’s review board.

Though Smith also said he sees significant challenges ahead. “I’m hopeful, because I have to be hopeful,” he said, “but I do think there still is a lot stacked against us.”

Left: Artworks in response to the events in Ferguson, Mo. featured here include, from left (clockwise): A quilt by Dail Chambers, Linda Lighton's "44 Magnum Mandala", Atif Ateeq and Roopa Vasudevan's "Hands Up" multimedia installation and a mixed media piece from Howard Barry's "We Are the People" series. Images provided by Dail Chambers, Freida L Wheaton and Reuters.