Taylor Swift has announced she will donate $250,000 to Kesha after a court ruled Friday that Kesha must continue to record with Dr. Luke, a producer who she says sexually assaulted her.

“In a show of support, Taylor Swift has donated $250,000 to Kesha to help with any of her financial needs during this trying time,” a spokesperson for Swift said in a statement.

An anonymous source told Rolling Stone that the singer was moved to donate after she saw a courtroom photo of Kesha crying as she heard the decision in court.

Kesha sued Dr. Luke for sexual assault and battery in October 2014, claiming that he had given her drugs that incapacitated her and raped her after her 18th birthday. She sought an injunction that would release her from her contract with Dr. Luke’s company Kemosabe Records, a property of Sony, which requires that she record three more albums with them.

Kesha has said that a ruling against her would mean the end of her recording career. “I know I cannot work with Dr. Luke,” Kesha said in an affidavit in September. “I physically cannot. I don’t feel safe in any way.”

In her ruling, New York Supreme Court Justice Shirley Kornreich said that Kesha’s contract would not be overturned, that it was “heavily negotiated and typical for the industry” and that Kesha still had the option to record with Dr. Luke’s company. Dr. Luke has denied the charges and sued Kesha for defamation.

In a statement on Monday, Christine Lepera, a lawyer for Dr. Luke, said Kesha was free to record with other producers, The New York Times reported. 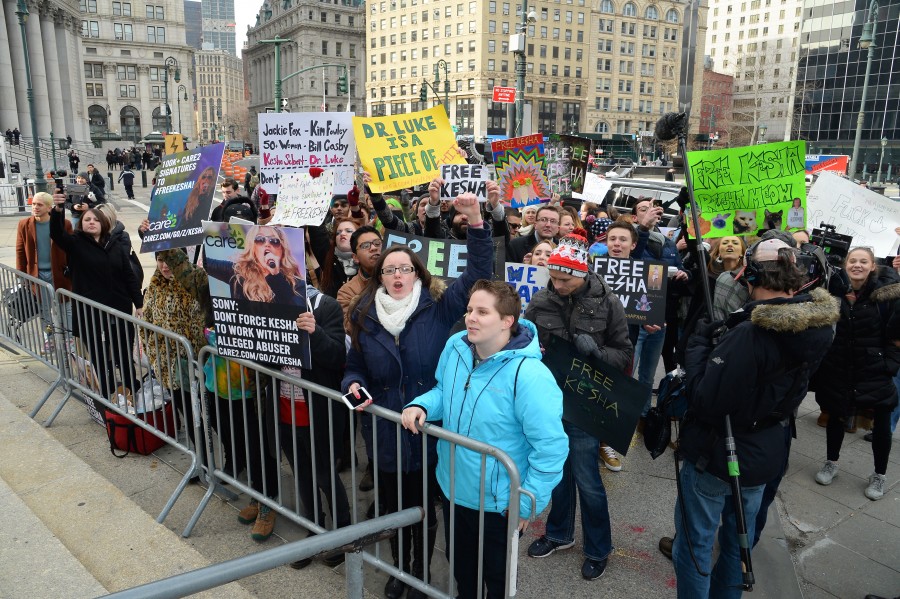 People cheer as singer Kesha is seen arriving at New York State Supreme Court on Feb. 19, 2016, in New York City. Sony has refused to voluntarily release the pop star from her contract which requires her to make three more albums with producer Dr. Luke, a man she claims sexually assaulted her. Photo by Raymond Hall/GC Images via Getty Images

Kesha has garnered support from thousands of fans online, from the hashtag #FreeKesha to petitions calling for the end of her contract. Critics of the decision say that it shows more concern for Sony than a survivor of alleged abuse.

“Kesha, a 28-year-old woman who’s been working in the music industry for a full decade, might think she knows what’s best for her,” Madeleine Davies wrote for Jezebel. “She might think it’s in her best interest to sever all ties with the man who allegedly raped and continually hurt her, but—really—what does she know? Sony’s invested $60 million in her career, their attorneys reminded the judge—what’s an emotional and physical violation compared to that?”

Angela Rose, executive director of Promoting Awareness, Victim Empowerment, an organization that advocates for survivors of sexual assault, said today that the organization supports Kesha. “We applaud Kesha’s bravery to speak out and shatter the silence about emotional and sexual abuse. It’s a travesty that a judge ruled with Sony to give more weight to contracts and money, than personal safety,” she said in a statement.

Kesha has also received an outpouring of support from other female celebrities.

There are people all over the world who love you @KeshaRose. And I can say truly I am in awe of your bravery.

standing with @KeshaRose through this traumatic, deeply unfair time. send good vibes her way everyone