Greek Novelist Ersi Sotiropoulos: ‘The Crisis Empties the Wallets as Well as the Souls’ 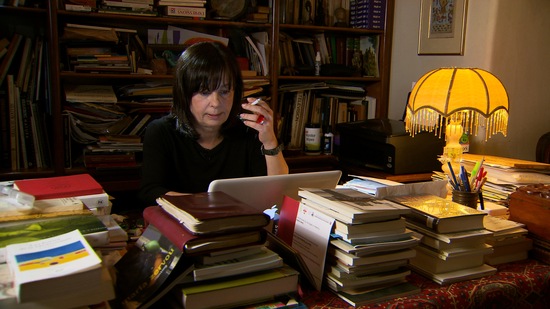 Ersi Sotiropoulos is a Greek poet, novelist and short story writer. Her novel “Zigzag Through the Bitter-Orange Trees,” published in English in 2007, was awarded the Greek National Literature Prize and Book Critics’ Award.

Recently, Sotiropoulos’ collection of short stories titled “Landscape with Dog” was also published in the United States. The 17 stories are set mostly in Greece and focus on a series of characters who are all connected in some way.

Sotiropoulos has been a fellow at numerous places around the world, including the Iowa Writers’ Workshop, Schloss Wiepersdorf in Germany and Princeton University.

When the NewsHour met with Sotiropoulos recently at her apartment in the center of Athens, she was in the midst of packing boxes for a move to the suburbs, saying she and her husband can no longer afford the rent. She also had a severe case of laryngitis.

So while she couldn’t talk on camera, she did have a lively chat with Jeffrey Brown about living and working amid the current economic crisis.

JEFFREY BROWN: I read an essay you wrote recently, “A View From Greece,” and you refer to Athens as a collapsing city.

JEFFREY BROWN: What does that mean?

ERSI SOTIROPOULOS: It is a city where very few things are still functioning. It’s not a welcoming city for its citizens. I think it’s still a lovely city for tourists, but not for Athenians. You can be stuck at any moment because of a small demonstration. You can never schedule something because you can be blocked in traffic for hours. Also, public services — you can go and spend the morning without concluding anything. Some of those symptoms are not new. We had that. But now everything is getting worse. The center is being transformed into a ghetto.

ERSI SOTIROPOULOS: A ghetto. If you have the chance to walk around a bit, you’ll see groups of junkies. You can see the drug deals start at ten in the morning.

JEFFREY BROWN: So on the streets you see more crime, more drug use —

ERSI SOTIROPOULOS: It doesn’t mean they are violent. They’re not. But, for instance, here in this area, I used to walk with my dog at 3 a.m., no problem. I don’t feel afraid but I don’t feel as comfortable as before. There are so many trash people.

ERSI SOTIROPOULOS: Looking through the trash. Not only poor people or immigrants. What was astonishing for me was to see was a middle-aged woman like me, well dressed, with a certain dignity, with a small stick looking through the garbage. Also hiding, in a way. Feeling ashamed. Looking behind her back to make sure nobody was observing her.

JEFFREY BROWN: Because she was formerly well off, middle class?

JEFFREY BROWN: How is what’s happening come into your writing?

ERSI SOTIROPOULOS: First, it comes into my life because I have to move from this apartment.

ERSI SOTIROPOULOS: Because we cannot afford the rent any more. To my writing, I think I am writing the way I was always writing throughout my life. But it’s more difficult to concentrate now.

ERSI SOTIROPOULOS: Because I have this feeling of almost physical oppression, sometimes suddenly during the day, like an earthquake is approaching. When you go out, you see people begging. Now beggars usually don’t ask for money. They usually ask “Please can you buy me something to eat?” After awhile, I’ve found I’ve stopped giving things. I’ve become selfish. Sometimes I pretend I’m talking on the phone. It’s not that I don’t have the money. It is opening up the purse and knowing there will be another, and then another and another who approaches me.

JEFFREY BROWN: Do you see it having an effect on society, the cohesion?

ERSI SOTIROPOULOS: Yeah, yeah, yeah. At the beginning I thought the crisis could be beneficial, in a way. That it would get rid of many silly things. The idiotic consumerism, the fast lifestyles. I thought it would be a chance to rediscover things like friendship. But I was wrong. It was an illusion. I mean the crisis empties the wallets as well as the souls.

JEFFREY BROWN: It empties the wallets as well as the souls?

ERSI SOTIROPOULOS: And the people are becoming more confused and more aggressive. And that starts things like the rise of Golden Dawn and extremism in politics.

JEFFREY BROWN: In the United States we have this question of the role of writers. Do they have a voice? What is the role for writers in Greece today?

ERSI SOTIROPOULOS: During these last two years, there have been many demonstrations, organized by a circle of poets in the main streets of Athens. Many people participate, not just poets. Personally, I think my role is to continue to write. Some writers now serve in the government. That’s not something for me. The role for me is to put questions, to reverse what is considered as established truth, to turn reality upside down. I know I can do that better with my writing.

JEFFREY BROWN: Your newest short stories are based on life in the last few years. So that’s changed the subject of the stories?

ERSI SOTIROPOULOS: You know, it’s not necessary to write directly about the crisis. Everything– as simple as a couple having lunch — can be full of reference and there are layers of crisis.

JEFFREY BROWN: So it’s always there? You don’t have to write something directly.

ERSI SOTIROPOULOS: I think for writers it would be unsuccessful to do that. A writer doesn’t have to do a political essay to talk about the crisis.

JEFFREY BROWN: Many of us look at Greece as the home of poetry and literature and Homer and tragedy. Does literature still have much of a place here?

ERSI SOTIROPOULOS: Yes. It’s amazing. And in a way, young writers — artists in general — have been energized by the crisis.

JEFFREY BROWN: In a good way?

JEFFREY BROWN: So something positive?

ERSI SOTIROPOULOS: Yes. Something positive. It is very interesting.

Mexico president heads to Washington for meeting with Trump

Thermometers in hand, Dubai opens for tourists amid pandemic