Lebanon’s first-ever Oscar-nominated film begins with a scene of everyday Beirut — a narrow street, the spray of a hose, a leaky pipe, the clanking of hammers on concrete, a balcony, a shout, a shaking fist.

But in “The Insult,” directed by Ziad Doueiri, what begins as a heated exchange between two men unfurls into a courtroom drama that catapults into the Lebanese national spotlight.

Doueiri, perhaps best known for his 1998 film “West Beirut,” is a controversial figure in the Middle East. His previous film, “The Attack,” was banned in Lebanon for violating long-standing laws against relations with Israel, since some of the film was shot in Tel Aviv. “The Insult,” although banned in some Arab countries including Palestine and Jordan, opened globally and in Lebanon to critical acclaim. 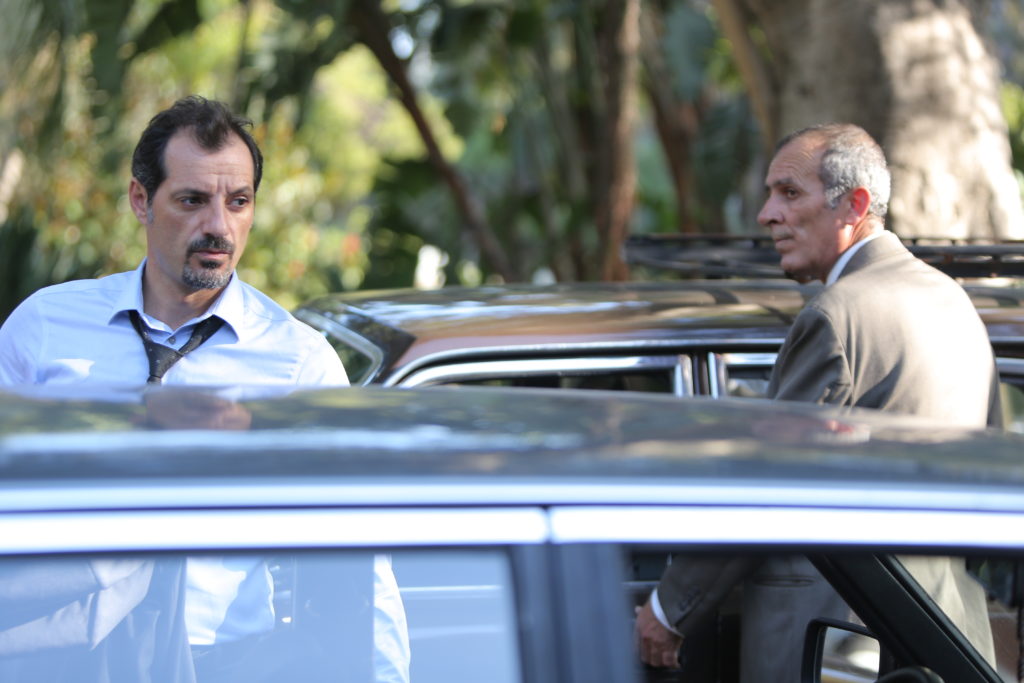 Adel Karam as Tony, left, and Kamel El Basha as Yasser, right, in “The Insult,” directed by Ziad Doueiri. Photo courtesy of the Cohen Media Group

The film follows Yasser, a Palestinian construction worker who becomes embroiled in conflict with Tony, a right-wing Lebanese Christian, over a leaking water pipe. When Yasser confronts Tony about his grievances, Tony hurls back an insult that strikes sharply at the heart of the Palestinian struggle. The film examines the many forms our personal truths can take, how they collide, and the consequences of words in a polarized world.

The NewsHour sat down with Doueiri to talk about the “The Insult” and what the film means for an increasingly divided society in Lebanon and the United States.

Tell me about your latest film, “The Insult.”

The subject came out of something I lived through, growing up in a war. … The film is, in a way, autobiographical.

At the beginning, it was just a similar incident, the way I write it in the film. I was in Beirut watering my plants and then the water fell on some of the construction workers and we had like a silly, heated exchange with one of the construction foremen. So we started yelling at each other and then we exchanged some insults and he says, “You’re a dog,” and then he says, “You’re a f***ing dog too.” And then I noticed that he had a Palestinian accent so I threw him “the big one,” just like in the movie. And then my wife at that time says, “You know, you probably ought to apologize because what you said is unsayable. It’s so hurtful what you said.” So I went down and said, “Look, I’m sorry, I didn’t mean that.”

And that’s it, that was the end of it. It was just some little silly stupid argument over a gutter, and two days later the idea just started to come on me. I said, “What if the story starts with a silly incident, an exchange, a verbal spat, and then instead of getting it resolved it gets actually more complicated where the guy goes to … he asks for an apology, the other one doesn’t want to. He goes to his boss, then he goes to the police, then he goes to the judge, then he goes to the Supreme Court all the way to the presidency.” It could happen like that in Lebanon. You could have a very silly incident that could develop into a national case.

Has this film been met with any controversy back home?

A lot, yeah. I mean, we were fought because some people thought that we’re opening old wounds, and then all the people felt that, you know, we were defaming the Palestinians. Other people said we were attacking the Christians. Anytime you make a movie that is a bit sensitive — this one is a little bit more than a bit sensitive — people go up in arms. You know, they look at the film and then they immediately start projecting themselves and projecting their prejudices against it. But it was extremely well received. It’s number one at the box office in spite of the fact that, you know, it irked some people but that’s okay, that’s part of who we are.

Especially in Lebanon, those old wounds and memories from the civil war are still so painful for so many people, and I just wonder if one of your goals for the film is to be one more hammer on that nail.

No, believe me, my goal was not at all to hammer or bring out a message or talk about a specific issue, that was not it at all. If you make a movie where you have a specific social, political message, you’re likely to screw up the movie because it becomes about the message and not about the film. When you sit down you start thinking about how to build your story, about how to make your characters credible, about giv[ing] them flaws, giving them strength, about what what the story’s about. You don’t think about social messages. You don’t think about wanting to change the society. That’s artificial. When you sit down to write a script, you have to think purely in terms of storytelling and then you let the audience extract what they want.

Now, certainly it’s not coming out of nothing. The subject came out of something I lived through, growing up in a war. Something that my co-screenwriter Joelle also lived through. It’s not like we read a book or based it on a TV interview on CNN. It’s something that we lived through, all the dynamics that you saw in the film, we are very familiar with it. You know, the Palestinian point of view, the Christian point of view. These are things that are so familiar to us. You know it’s this thing that we grew up eating and drinking and living. We were stopped at checkpoints, we hid under the bombs, we lived in shelters in Beirut in the 70s and the 80s and the 90s. So that all kind of like go[es] into your USB hard disk and then you memorize it and then you register and it makes you who you are today. The film is, in a way, autobiographical.

So what are your hopes for the film? Do you have any hopes about what people get out of it?

When the film was submitted to the Lebanese authority, we were very worried that the Lebanese authority would not release it because I made a previous film five years ago that was very problematic for me. It’s called “The Attack.” And we were worried that with this new film … they might continue boycotting that movie or banning it and, to my big surprise, the government actually gave us the green light to release it. To me that was such a big moment because I didn’t think it would happen. The fact that the Lebanese government gave us the stamp of approval was a big consolation for me.

This idea of censorship and artistic accessibility and activism in Lebanon is one that’s personally frustrating for me too because Lebanon straddles the line of being this very open and artistically liberating society, but also not.

Exactly. I so agree with you. It’s always a fine line. It says, “We want to be democratic,” but sometimes there are a lot of parameters. I wish it would swing that way.

You know Beirut well. You lived there.

I didn’t, but I visit every year and my family is still there. I visit as often as I can.

And so you know the emotional imbroglio that you can get into, no?

Welcome to the club.

I count the days to my next trip and then I get there, a week in, I just can’t do it anymore.

I feel exactly the same. I feel exactly the same. You are drawn to it because it’s so passionate and so close to the heart. But at the same time you cry or you feel so sorry about the missed opportunity. Because we could have been great. We could have been such a lighthouse in the midst of all these other places around because we’re so interesting. Lebanon so interesting. But it’s sad that it does not fully use its potential. You know Christians, Muslims, Shiites, Sunni, liberal, it has all the potential of making a very, very interesting place.

We can’t get over our old wounds, unfortunately.

On the issue of hope, I mean do you hope Lebanon will recover from those wounds?

The whole film is about hope. This is a very optimistic film. I gave an end that — it’s a feel-good movie actually.

It is, because at the end the characters actually reconcile with themselves. You say, “Are you optimistic about Lebanon?” And I say I’m optimistic by the film because the message says that it is very possible to reconcile. Sometimes it doesn’t take that much, it takes the will to sit with your enemy face to face. And then the wall of prejudice falls relatively fast. 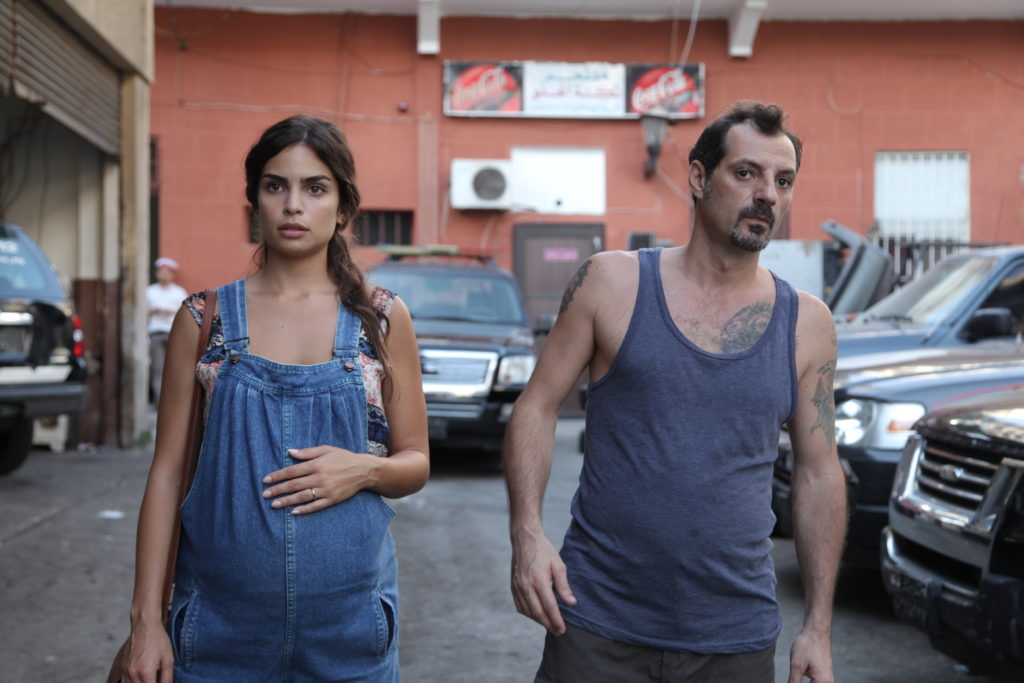 Rita Hayek as Shirine and Adel Karam as Tony, right, in “The Insult,” directed by Ziad Doueiri. Photo courtesy of the Cohen Media Group

I think this film is important for American audiences.

That’s what I keep hearing. Like every screening we do in the states, in Los Angeles in Telluride, in Toronto people were like so emotional about it. And then they said, “We totally identified because of what’s going on in the States today. We are living in America at a period where it feels like this entire society is tearing apart a bit.” And they look at the film and suddenly it’s speaking to them, even though that was not the intention.

I was in Spain showing the film at the Film Festival and then the people came out so emotional. The film was screened that day, the very same day, the Catalonians seceded from Spain. You remember that? And then they came out and there was some woman crying actually, saying, “Look what’s going on in Spain because we did not really have a national reconciliation.” And yesterday at a screening, a lot of those American viewers would come in and say, “We’re going through the same thing in America,” and that’s not intentional, it just happens. It speaks about polarized views and how a society can get divided like in that film.

Why would it be necessary?

Because it makes you re-examine your beliefs. You know sometimes something needs to broken down to be rebuilt better. It’s very human. It’s history. It’s cyclical. So I don’t think it’s bad. Sometimes the country needs to go through a tear in order to heal better.

This interview has been edited and condensed for clarity and length.

Left: Adel Karam as Tony in "The Insult," directed by Ziad Doueiri. Photo courtesy of the Cohen Media Group