‘The Oregon Trail’ could have used a Native American viewpoint, co-creator says

One of the three co-creators of “The Oregon Trail,” took to Reddit on Monday to field questions on the video game, which introduced scores of school children to the trials and tribulations of pioneer life in America, including bouts with dysentery.

Don Rawitsch said he “wanted a game to help me teach about the Westward Movement in the mid-1800s,” but added in the Reddit thread that the game was missing a Native American viewpoint.

“Oregon Trail” is populated with helpful Native American characters, but their back stories are never explored, nor does the educational game shift from the perspective of its white, male protagonist, who leads a group of settlers from Independence, Missouri to the Willamette Valley in Oregon. 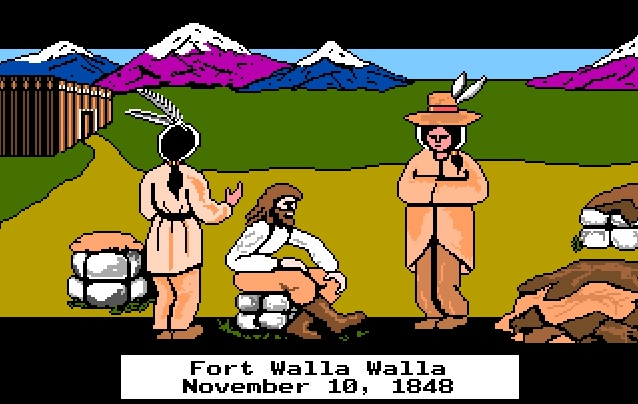 Invented in 1971, the game gives players with a set amount of money to buy essential gear, food and teams of oxen. Along the way, the wagoners could suffer from snake bites, broken limbs, various illnesses (fevers, typhoid, measles, cholera, oh my!) and experience delays from strong thunderstorms and blizzards on the 2,200-mile journey. Players can also customize tombstone epitaphs for anyone who dies in their party, including their own.

Rawitsch also shared his thoughts on the “gamification” of education, a tip on when to ford a river, and, of course, whether he’s had dysentery. Here are some of the his best responses:

Q: Is there anything you wanted to include in the game but had to cut due to memory limitations?

Not due to memory (well, maybe my own). But it would have been interesting to add a Native American viewpoint, perhaps a character who watches the wagons come into that territory.

A Reddit commenter then asked if people complained about the negative portrayal of Native Americans, who would sometimes in the game attack wagon trains on the trail. Rawitsch said these attackers weren’t actually Native Americans.

We were careful in the original version to say “riders attack.” In fact, often the attacks came from white bandits, not Indians.

Q: “Gamification” is a popular topic of research right now for its potential impact on education and training programs. Do you still feel like history is a good candidate for acquiring knowledge through simulation/games.

Absolutely. It gives people a chance to “feel” history by participating. It provides a way to “test” the results of alternative historical outcomes. But history is also enlivened by stories, so you need to read it as well.

Later in the thread, Rawitsch also said, “Play is critical, especially for younger kids, but there are still ways of making learning fascinating for older kids.”

Q: What is the strangest bug/error you encountered while making the game?

Once some kids from Alaska wrote MECC claiming to have a fool proof method for winning. They entered a negative number for food spending which the program subtracted from their money, which actually added to their money. They got rich. We quickly added an input check to all money questions to reject negative numbers!

Q: Would you ever recommend fording the river under any circumstance?

Fording the river usually works if the water is shallow (say 2-3 feet). River depth is displayed for the player in the personal computer version of the game.

Q: What will you put on your tombstone?

Q: Have you personally ever had dysentery?

A 1990 version of “The Oregon Trail” is available to play on the Internet Archive.

Left: A still from an early version of "The Oregon Trail" computer game that taught school children how to navigate the pioneer life in the mid-1880s in America. Image from Internet Archive