The San Francisco Symphony turned 100 this year. With a busy touring schedule and listeners around the world, the symphony has won some of the most prestigious awards in music: 11 Grammys, France’s Grand Prix du Disque, Britain’s Gramophone Award and Japan’s Record Academy Award. It has its own record label, launched in 2001, and its musicians are in the process of recording the Mahler symphonies and orchestral song cycles. It has toured nationally 10 times and visits Carnegie Hall every year.

The orchestra and its director of 17 years, Michael Tilson Thomas, have also launched innovative projects to grow their audiences and helped produce television programming, radio shows, DVDs and educational materials for students.

The Symphony formed in the wake of the 1906 earthquake that devastated San Francisco. In the ensuing years, while the city reorganized, classical musicians played concerts in the parks as cultural institutions formed and grew. One of those institutions was the San Francisco Symphony, formed in 1911.

I recently spoke to Michael Tilson Thomas on the phone from San Francisco:

A full transcript is after the jump. 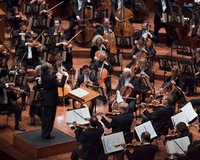 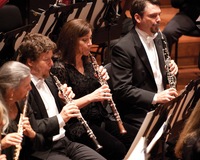 JEFFREY BROWN: Welcome again to Art Beat. I’m Jeffrey Brown. The San Francisco Symphony is markings its 100th anniversary this year. It’s a rich history, and even in a time when we often hear of the troubles of classical music, it’s one that continues to grow. A major part of that is the symphony’s music director, Michael Tilson Thomas, who joins us now by phone from San Francisco. Welcome to you.

MICHAEL TILSON THOMAS: Thank you, Jeffrey. I’m really very happy to be with you.

JEFFREY BROWN: At a moment like this, you must think a lot about the role of a symphony orchestra in its community, in particular, and perhaps how that’s changed. How do you define today?

MICHAEL TILSON THOMAS: The orchestra’s, I think, now become a real torch bearer of the whole culture around classical music and is really very much the motivating force for a community’s focus on that, which comes a lot through our educational projects. It comes from all of the things that we do and the various kinds of media that we increasingly produce ourselves and shape to reach different kinds of audiences both in San Francisco and around the rest of the world. It’s very much more than just coming in and playing the notes, I think. It’s really everyone thinking about how they are a part of a community.

JEFFREY BROWN: Well, that’s what I wonder. I mean, a community has its sports teams, it has all kinds of cultural institutions. You’re performing at an international level and around the world, but is local first? Is that how you define yourself?

MICHAEL TILSON THOMAS: I think we’re very aware of our audiences. This is something perhaps that I’ve inherited from my grandparents, who were pioneer founders of the Yiddish Theater, and I was raised kind of in a theatrical environment to be very much aware of the audience, who really are our audience members and where are they and how can we be with them, and at the same time how can we have ambitions for them of where we would like them to be and how much music that they don’t know would we like to introduce. That idea of the partnership that we have with our audiences is essential to everything we do. And in this celebratory year, for example, yes, we are making some recordings and videos. Yes, we are doing a certain amount of touring, but what we’re really doing a lot is bringing other ensembles and soloists to San Francisco so that we can really celebrate with them in the town that we love so much that shapes so much of what we do.

JEFFREY BROWN: At this time, when a lot of orchestras are having hard times, really, you see so many efforts around the country to engage the community to try to reach out to bring new audiences. I’ve had the chance to talk to people doing that around the country. Where do you think orchestras are doing well and where do they fail now in reaching out and engaging the community?

MICHAEL TILSON THOMAS: I think the best way for me to answer that is just to say what I believe in. I believe in the relationship very much, the relationships between myself and my colleagues on stage and our relationship to the audience, to the many different audiences that a great orchestra has, because different series, different repertoire, it attracts different audiences. We even feel it from night to night when we’re doing a subscription program, that the Wednesday and Thursday, Friday, Saturday and then Sunday, these audiences all have a particular kind of character. We relate to them, I think, in different ways, let alone what it means to have a series which is focused on baroque music or focused toward contemporary music. But whatever it is, we always are thinking about them and never expecting that simply because it’s a certain night of the week people will just show up. I think there was a time in American cultural life, symphonic life, when just the sort of habit of going to concerts sustained a great deal of it, that it was very much tied to a certain group in society who were making that night part of their general, weekly, monthly habit, but we don’t presume that anymore. Just subscriptions, for example, in every ensemble in the country are smaller in number than they once were, so we’re very much more focused on each week, each concert, what is happening, who is coming, how attractive the program is, how well a job we can do, an excellent job we can do about presenting that online or in some other way so that people are aware of it and it captures their attention. And we never stop thinking about that.

JEFFREY BROWN: But give me an example. I mean, part of that is clearly through programming, right?

JEFFREY BROWN: What’s an example of how you would think differently or think in a new way?

MICHAEL TILSON THOMAS: Well, of course, I’m very aware the appeal of various soloists and of balancing traditional repertoire with challenging repertoire. Also, we’ve developed with the audience an interest in particular composers, so that over the years I’ve focused their attention on Ives’ music, for example. We’re now developing a whole project which is comparing music of Franz Peter Schubert and Alban Berg. We harp the Maverick Series, which is coming back, which presents really iconoclastic American composers, many of whom come from the Bay Area and many of whom were introduced to this audience 10 or 15 years ago. It’s focus on what’s happening in this evening’s concert, but also how it fits in to kind of larger consciousness-raising agenda that we have with the audiences now and well into the future.

JEFFREY BROWN: Does bother you that so much of the attention for classical music these is about the problems of classical music? Do you buy that there is a problem or do you just prefer to think through ways to address it?

MICHAEL TILSON THOMAS: I think you always have to be thinking about it. You having to be thinking about building the loyalties with your public, of sustaining their interest, and the best thing about live music is that it needs to be played as if it were alive. It can’t be a ritual; it has to be really something striking and generously presented, and perhaps this is one the most important qualities that I share with the members of the orchestra, that we are in very, very good communication. I would say after 17 years that I’ve been with them I feel that our communication is the best and most open now than it’s ever been.

MICHAEL TILSON THOMAS: Yes I know that is so, and I can feel it from them and from the audience. So much about my way of working with them is trying to create a situation in which they feel the freedom to really be the kinds of musicians, the kinds of soloists, the kinds of amazing team players that they are and to enjoy the musical process. And when that happens, I think everyone feels it. And that is about how we all are with one another in every rehearsal and trying to really be there for the music and for one another. That perhaps sounds very Bay Area.

JEFFREY BROWN: Well, why not.

MICHAEL TILSON THOMAS: One of my favorite lines of Walt Whitman is he says, nothing endures but personal qualities. In the context in which he says that means that it’s not only what is done but it’s the spirit in which it’s done. And that affects everyone who’s with an organization over a long period time, and hey, the orchestra is celebrating its 100th birthday. I think there are many things about the adventurous character of the orchestra and about the desire of its audience to have fun with the music as well as being enlightened by the music. But I think that character must have always been there and it’s something that we still have and that we cherish.

JEFFREY BROWN: Well, so we’re talking about the contemporary experience of the orchestra. You tie it back to its founding 100 years ago.

MICHAEL TILSON THOMAS: Definitely. San Francisco had a big history of loving music back to the gold rush. It’s extraordinary seeing the big personalities who came through the town and had their ardent fans, whether they were Adah Menken or Ole Bull or Tetrazzini or whoever, but there was always a desire to hear concert music and opera. After the 1906 earthquake even, there was music going on in the streets and performers classical performers were taking pianos out into the park and playing for people in tent cities. And part of the dream that the city had of reinventing itself after the earthquake was very much tied to the creation of cultural institutions, and the symphony, which was founded in 1911 was one of those. Groups of musicians were gotten together in those intervening years and then with Henry Hadley, who was an American composer, interestingly, the first music director chosen by the orchestra, this whole continuum began. And I think that idea of music for the people, music to life people’s spirits was an essential part of the origin of the band.

JEFFREY BROWN: The challenge continues, though, to continue that identify between city and orchestra institution.

MICHAEL TILSON THOMAS: That’s it. That’s what we do.

JEFFREY BROWN: All right. Well, 100 years and counting for the San Francisco Symphony. Michael Tilson Thomas, music director, thanks so much for talking to us and congratulations and good luck.

MICHAEL TILSON THOMAS: Thank you so much, Jeff.

JEFFREY BROWN: And thank you all for joining us again on Art Beat. I’m Jeffrey Brown.