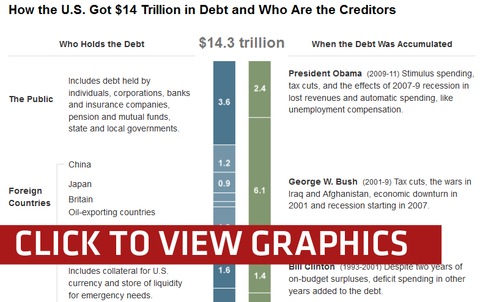 A fascinating set of graphic debt data, courtesy of the New York Times.

Meanwhile, amidst all the scare talk of a bond rate crisis, has anyone noticed that the bond market is rallying mightily today? As of 4 pm, the 10-year yield was down to 2.79 percent, an interest rate last seen in December and among the lowest since JFK was President. Here’s a picture to put 2.79 percent in historical context.

Remember that our lenders, the so-called ‘bond vigilantes,’ were supposed to have been holding up Uncle Sam at gunpoint, forcing him to hike interest rates to mend his profligate ways. Instead, they’re throwing money at the old man. supporting the analysis of many economists that drastic deficit reduction would spell a double dip, as spending dries up in an economy already sagging under an official unemployment rate of 9.2 percent and a U-7 closer to 20 percent, by our reckoning.