‘This is just the beginning’ of change in the industry, says female director of new movie about life after sexual assault

A boss once gave filmmaker Jessica Thompson her “yearly review” with his nose pressed against her cheek and offered her cocaine as a “Christmas bonus,” she said. A sound designer once told her she didn’t need talent because she was a “hot piece of ass.”

These experiences informed Thompson’s first feature film “The Light of the Moon” about a woman rebuilding her life after a sexual assault, which premieres in select cities this month. This comes, of course, as Hollywood is rocked by the Harvey Weinstein scandal. After his fall, it is female filmmakers like Thompson who hope to be part of molding its new future.

As the hashtag #MeToo spread on the web, in response to dozens of sexual harassment and rape allegations against Weinstein, Thompson posted her own visceral take down on Facebook of an industry she first entered as a child actor at the age of 12 before moving behind the scenes as an editor and commercial director.

“It did make me relive a lot of these things,” Thompson said on seeing the Weinstein scandal playout and the wave of posts from friends on social media. “I think that’s why I wrote that #metoo post, because I was extremely emotional. I felt like I was remembering all of these horrible times.”

“To: the many, many male Directors who have put their hands on my thighs, my waist, my hands, commented inappropriately on what I am wearing…” Thompson wrote in her post. “You are some of the main reasons that I made ‘The Light of the Moon,’ in hopes of ending #rapeculture in society and to help change the industry… This is just the beginning!” 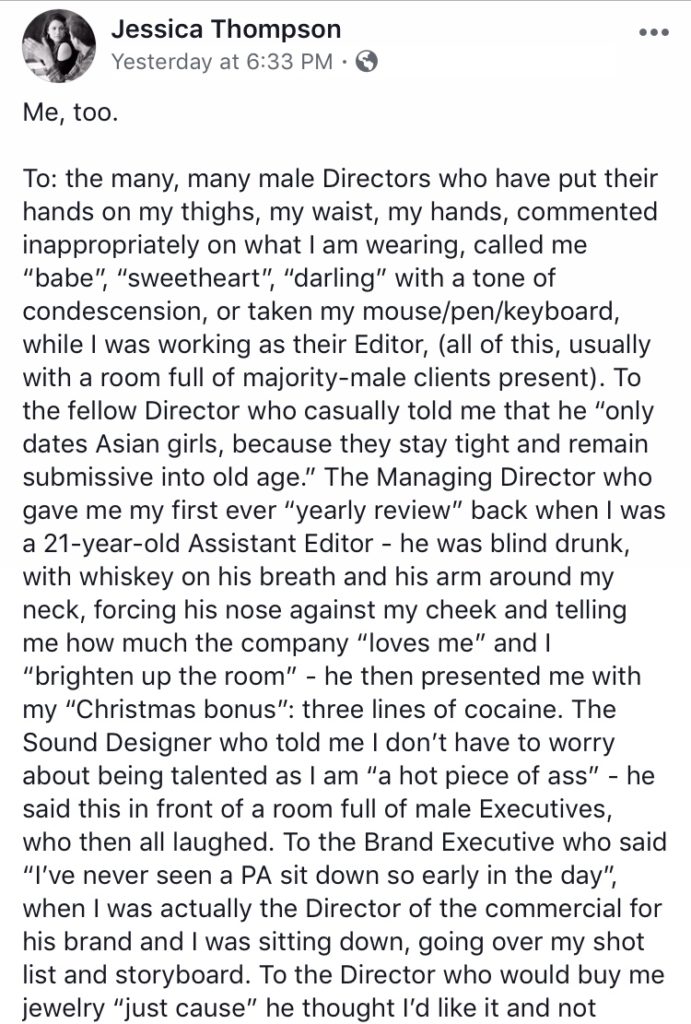 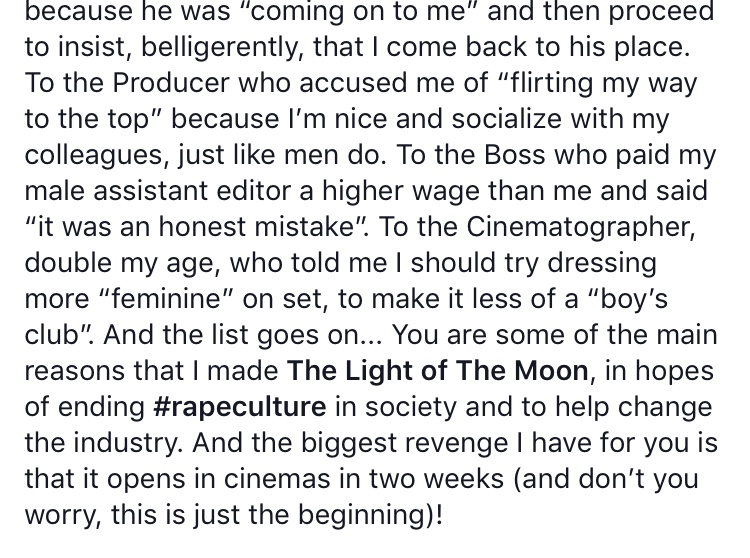 Throughout “The Light of the Moon,” Thompson lifts directly from personal experiences. In the film’s opening scene, a colleague wryly tells the main character to wear a low-cut shirt for an important presentation, something she said had happened to her.

The worst experience of her career, she said, occurred in March 2016, when she was tapped to edit a commercial for a popular advertising director. Cloistered in a small, dark edit room, the problems began right away.

“Every day he was commenting on what I was wearing, putting his hand on my thigh,” she said. “The amount of times this man would reach over and put his hand right around my waist. I’m talking to touch my belly button.”

Jessica said she confided about the incidents to Carlo Velayo, who was her housemate at the time and is now her producing partner on “The Light of the Moon.”

“Jess was just exhausted after the project and said she never wanted to work with him again,” Velayo said.

The numbers tell the story too. Only 3.4 percent of all film directors are female, according to a 2016 USC report on gender and diversity in the entertainment industry. Of the 100 top-grossing movies released in 2016, only five were directed by women.

Thompson said she and her team intentionally opted to go with a woman-owned distribution company called Imagination Worldwide.

Last week the St. Louis International Film Festival announced it was removing a Weinstein Company produced film from its line up. Instead, the Festival will show “The Light of the Moon” and donate funds from the screenings to an organization that helps victims of domestic and sexual violence.

For her part, Thompson is both optimistic and concerned about the long-term impact the Weinstein scandal will have on Hollywood. “What I worry about is it’s going to turn off young artists to get into this industry. I can tell you that there are many times that I’ve wanted to get out of this industry because of the rape culture, because of the sexualization of women, and the lack of parity. Where I thought, ‘Oh my gosh, it’s like pulling teeth, the amount that I have to prove myself.’”

But Thompson also sees brighter days ahead: “We’re going to see a huge shift in the industry. I feel it.”

Left: Filmmaker Jessica Thompson on the set of "The Light of the Moon," which is out in select theaters this week. Credit: Kayla Davidson