This winter, give whiskey sours another chance

Whiskey sours get a bad rap. At a lot of bars, where neon sour mix and sticky sweet cherries from a jar are key ingredients, the cocktail deserves it.

But Frank Mills, who tends bar at Jack Rose in Washington, D.C., says holiday revelers should give the drink a second chance.

“When made the right way,” as it was intended — simply whiskey, lemon, sugar, bitters, and usually, egg whites — “it’s hard to deny,” he says. (Esquire calls it “the fried-egg sandwich of American mixology: simple, easy, reliable in a pinch.” )

“When made the right way,” as it was intended, the Whiskey sour is “hard to deny.”

Rather than mask the whiskey, as that mystery sour mix is wont to do, true whiskey sours should highlight the dark liquor’s best features with fresh-squeezed citrus.

When Mills joined the team at Jack Rose, home to the largest collection of whiskey in the Western Hemisphere, he added to the menu his own winter version of the classic drink: The Riding Shotgun, a word play on Bulleit Rye, the kind of whiskey he prefers to use for this cocktail.

Why egg whites? They help mellow out the citrus, eliminating that pucker-inducing first sip you’d get drinking one of these at a dive bar. But you don’t have to be a master mixologist to froth egg white cocktails at home. Mills uses a technique called the reverse dry shake: load up a shaker with all your ingredients and ice, shake, strain, and shake (without ice) again. When you make your final pour into the glass, a layer of snow white egg froth will float atop the liquor.

Whiskey sours can be enjoyed year-round, Mills said, but in the winter, he adds a spiced simple syrup, made with baking spices like cinnamon and cardamom; black walnut bitters, for a nutty twist; and pomegranate grenadine, a tribute to a classic winter fruit. He tops it all off with some fresh-grated nutmeg for an extra holiday kick. 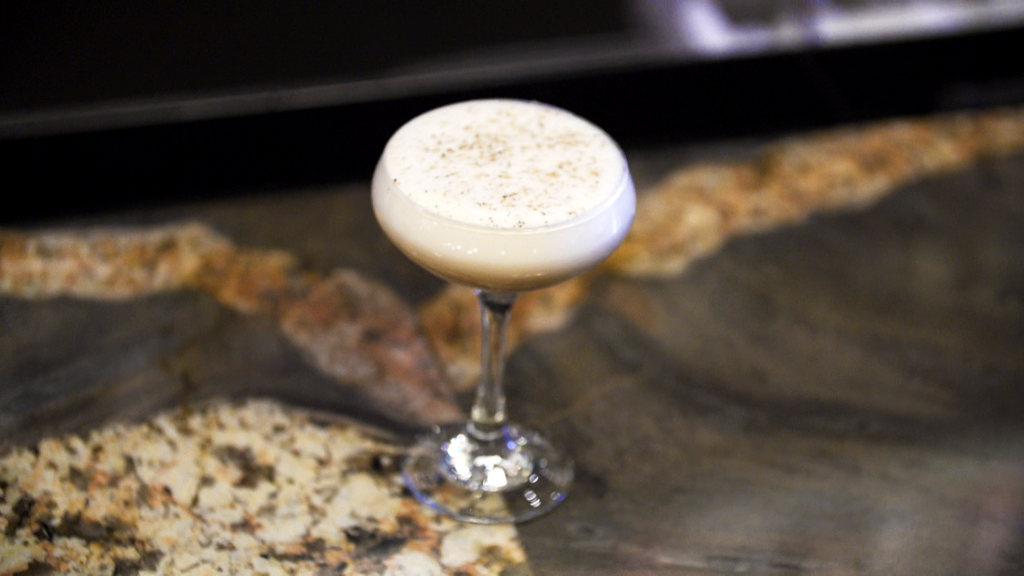 The “Riding Shotgun” is a winter twist on the Whiskey sour. Photo by PBS NewsHour.

Add all ingredients to shaker tin. Vigorously reverse dry shake. Strain up into a coupe or martini glass. Top with grated nutmeg. Enjoy.