This youth classical music program turns no students away

For a group of children in Yakima, Washington, life is changing one cello at a time.

Young children line up outside the music room at Garfield Elementary School under the only graffiti on campus. It says “La musica de la vida,” words that are true for these kids. They are members of YAMA, which stands for Yakima Music en Acción, or “Music in Action.”

The program aims to educate under-served children on classical music study and performance. Students in grades three through eight from nearby schools attend YAMA, and they rehearse at Garfield Elementary School. 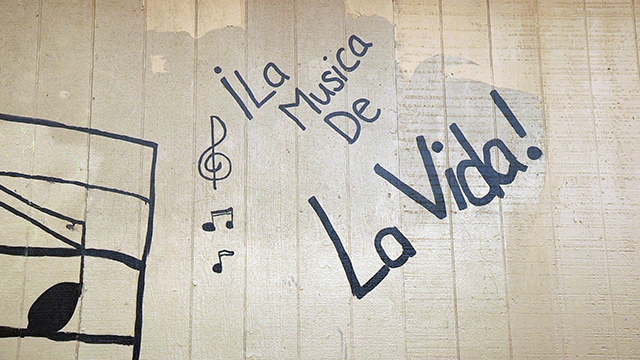 In the music room, intermediate cello players work on a haunting Russian melody while the teacher encourages them to play, “Proud! Strong!” In the library, newly-minted musicians — the really little kids — make a rainbow shape with their bows and drop them onto violin strings for the first time. Down the hall in a classroom, the more advanced violin section is biting into the William Tell Overture. And it is biting back.

“Persistence!” program founder, Stephanie Hsu, yells above the fray. “Nobody falls off this bus!”

Persistence is an understatement. This isn’t a once-a-week music appreciation class. It is a rigorous program to master a musical instrument, requiring two hours after school every day. Most of these children also practice at home in the evenings and on weekends. 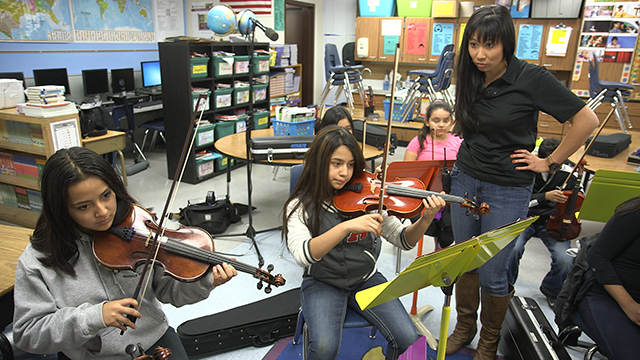 “Without YAMA, you are just bored at home, there is nothing to do. But with YAMA you can play music and it’s fun,” said Jaiden Cano, an 11-year-old boy with a mischievous smile. “When you are really frustrated and you can’t play a part, practice. You will get better and then you will just feel it.”

Stephanie Hsu, a musician from New York City, relocated to Yakima to start YAMA. It is based on El Sistema, a program in Venezuela which has worked with thousands of children, including Gustavo Dudamel, who grew up to become the dashing young music director of the Los Angeles Philharmonic.

YAMA utilizes many of the methods that make El Sistema so effective: all instruction and instruments are free. No child is turned away. Instruction is done in groups and many of the teachers are professional musicians. Performance is stressed from the beginning — kids are learning to play these instruments for the enjoyment of the community. 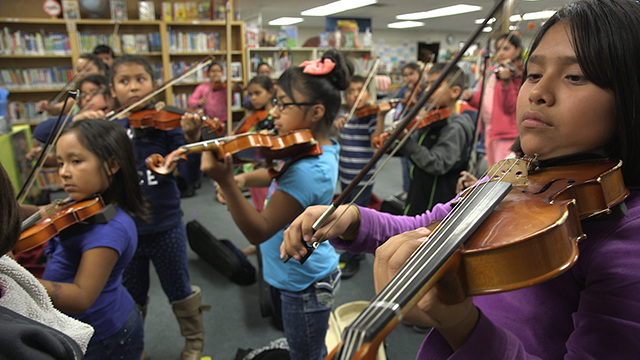 Young violinists learn how to hold their instruments and bows. Photo by Greg Davis, courtesy of KCTS

“It is just what our kids needed in this school,” Garfield Elementary Principal Alan Matsumoto said. “Which was something to look forward to.”

Many of the parents of YAMA musicians are Spanish-speaking migrant workers who work in Central Washington’s fruit industry. They can’t afford to buy their children violins and classical music training. But the language of music is universal, and so are the parents’ reactions when they watch their children perform in a symphony hall.

“When I watch my girls perform my heart feels so big. I’m so proud,” said single mom Flor Mateos, whose two daughters have been in YAMA since the program started three years ago. Speaking through an interpreter, Mateos said that the program has brought her family closer because they share the goal of helping the girls prepare for concerts. 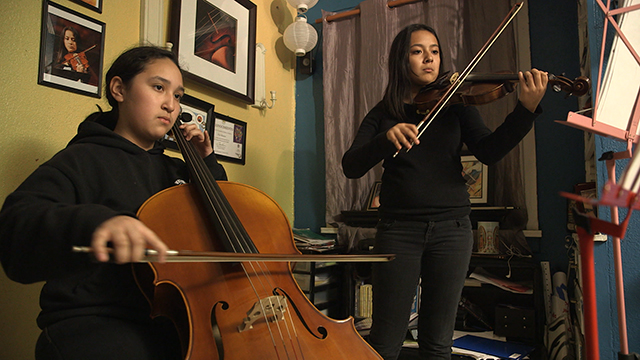 “At first, concerts were really scary for me,” Mateos’ daughter Enerida said. “I remember playing Twinkle, Twinkle, Little Star, and I was shaking! I don’t feel like that now.”

Enerida’s grades have also improved since she began playing the violin. Hsu said that’s quite common with kids who have been “YAMA-tized.”

“I’ve heard parents say, ‘My kid was struggling in math, but after a year of doing music at this intense level, it’s not a struggle anymore,’” said Hsu.

Moira Boughton, one of the new kids in the program, is barely bigger than her violin. “When I grow up I want to play music and make money and give it to the people who need it,” she said.

The curtain almost fell for YAMA in 2015 when the grant that provided much of its funding ran out. The Yakima Symphony Orchestra stepped in and saved it temporarily. Hsu said she wants to keep YAMA going as a freestanding nonprofit — not because she wants to create professional musicians, but because she believes YAMA can improve lives, one note at a time.

“My goal is to show our kids that they can do whatever they want to do in their future,” Hsu said. “There are no limits placed on them based on where they are from.”