Who gets to be called an artist?

Thornton Dial, a self-taught artist whose works with everyday materials spoke to the difficulty of black life in the South, challenged the art world’s answer to that question. Dial died on Monday at the age of 87.

“He changed the art world’s world conception of who artists were or could be and where art comes from.” — curator Joanne Cubbs

Born in 1928 on a farm in Emmelle, Alabama, to a family of sharecroppers, Dial only attended school until the third grade and spent much of his childhood picking cotton. He was a metalworker for the Pullman Standard Company for 30 years until it closed in 1981, then did jobs in farming and construction. All the while, he created paintings, sculptures and multimedia pieces from the objects that surrounded him.

“The first thing I remember making I was a little old bitty thing,” Dial said in an interview with the Souls Grown Deep Foundation, which owns a number of his pieces. “I hook up a matchbox to two hoppergrasses, tie threads around their neck. I wanted to have my own mules and wagon. Called it ‘the green horses.'”

He often worked with found materials — rope, cans, carpet and steel — and styled them, drawing on African-American folk art traditions, into commentary on the problems of systemic racism and oppression in the South. Some of his pieces spoke to the tradition of African-American yard shows, which consisted of sculptures created from cast-off objects. He “made something out of nothing,” Alvia Wardlaw, who curated an exhibition of his work at the Museum of Fine Arts, Houston, in 2005, said.

The collector Bill Arnett met Dial in 1987 and spent the next few decades championing Dial’s work through the mainstream art world, in part by organizing tours of curators through Dial’s studio in Bessemer, Alabama. At the time, many self-taught artists were relegated to the category of “outsider art,” a problematic designation that seemed to suggest his art was less worthy of attention, said Joanne Cubbs, who curated a retrospective of Dial’s work at the Indianapolis Museum of Art in 2011 and authored a book on his work.

On the contrary, his work “challenges the canons of art history,” Cubbs said. “You could say in many ways that Dial’s artwork represents a missing chapter in American art history and serves as a kind of emissary for the rich, and yet unrecognized, tradition of black vernacular art for the South.”

Dial’s work defied the stereotype of what self-taught art looks like — it was bold, expressive and provided insight into some of the deepest socio-political issues in contemporary history, Cubbs said. “He changed the art world’s world conception of who artists were or could be and where art comes from,” she said. “He confused the stereotypes normally assigned to artists … who were ‘untrained’ in the conventional sense.”

As museums began to show his work in the 1990s, his work drew comparisons to Jackson Pollock and William de Kooning along with critical admiration. “He has a genuine talent that he brandishes fearlessly,” art critic Roberta Smith at The New York Times wrote in 1993.

But Dial never liked to talk about himself, according to Phillip Jones, the former director of the Souls Grown Deep Foundation. “The thing that he said all the time was, ‘You have my art, so you have my mind. Why would you ask me what I think about something when you can see for yourself?'” Jones said.

So we followed the artist’s advice. Here’s what the curators had to say about four of his pieces.

“Don’t Matter How Raggly The Flag, It Still Got To Tie Us Together” 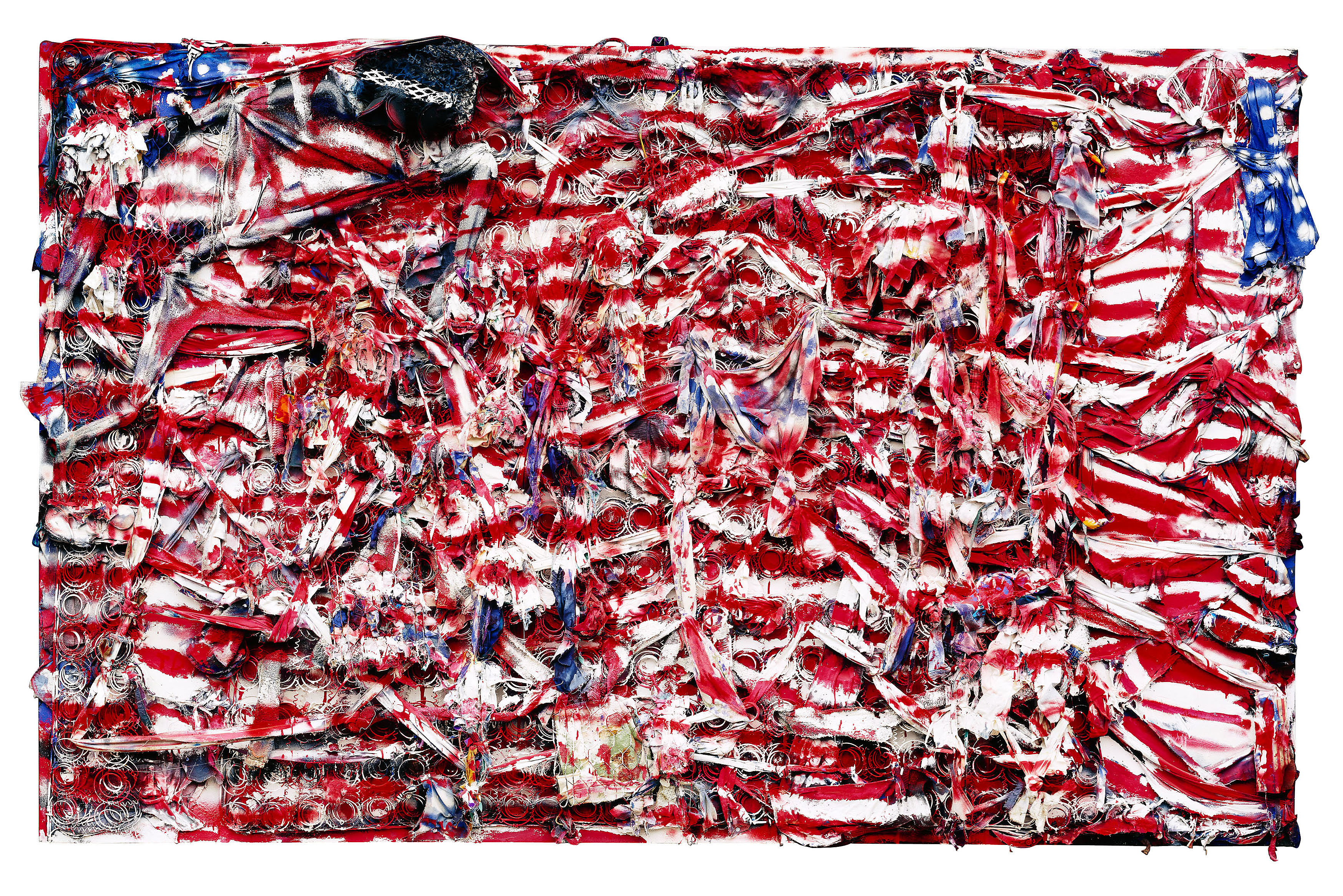 “Don’t Matter How Raggly The Flag, It Still Got To Tie Us Together,” 2003. © Thornton Dial, image by Stephen Pitkin/Pitkin Studio. Collection of the Indianapolis Museum of Art

The damage to this flag is immediately apparent. Bits of fabric — Cubbs called them “bloody rags on a war-torn battlefield” — form a twisted version of the U.S. flag.

Dial created this piece in 2003 at the outset of the Iraq War, and it is “conscious of the horror of an unchecked quest for domination and power,” Cubbs said.

The flag, though, forms only one layer of the painting. Beneath it are mattress coils, along with two figures, one black and one white. The mattress coils form “a metaphor for the hard bed we’ve made for ourselves,” Cubbs said.

But the piece — and especially its optimistic title — also reflects the idea that all U.S. citizens are held together by the flag, however shredded it becomes, Jones said. i think it’s a lovely but simple statement on the importance of getting along,” he said.

“Beginning of Life in the Yellow Jungle” 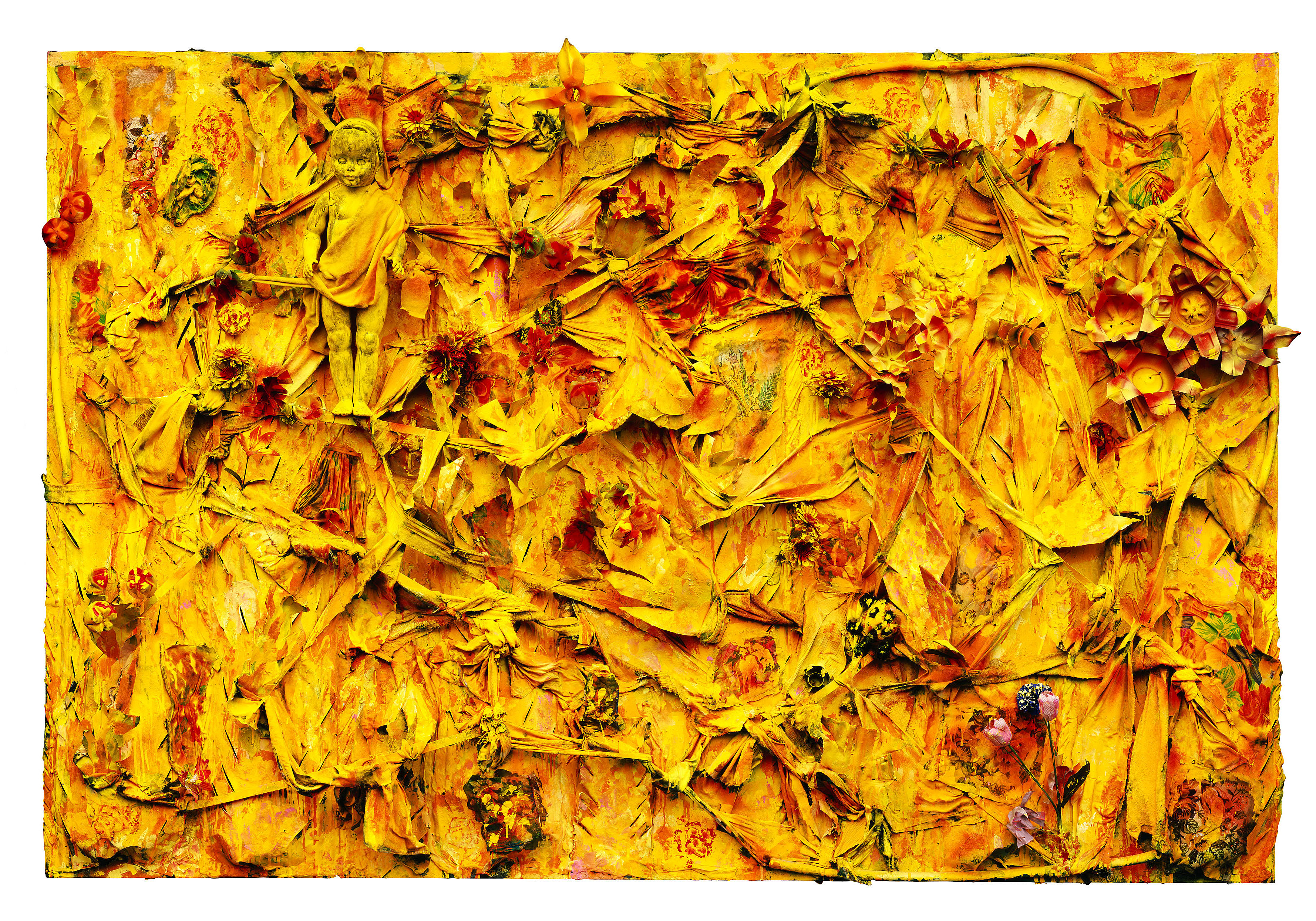 Cubbs called this piece “one of the most overt musings on the metaphysical that Dial created.” This analysis comes in part from the painting’s emphasis on living things; scraps of floral fabrics, artificial plants and soda bottles form the shapes of vegetation, surrounding the figure of a doll. That doll could be interpreted to represent humanity at its birth, Cubbs said. “I think this is his sort of rapturous vision of how we all came into being,” she said.

Dial used a lush blend of yellow tones in the piece, ones that he has used before to symbolize racial equality. Through those colors, “He wants to represent the coming together of the races, coming together of all humanity, a kind of blending,” she said.

“Green Pastures: The Birds That Didn’t Learn How to Fly” 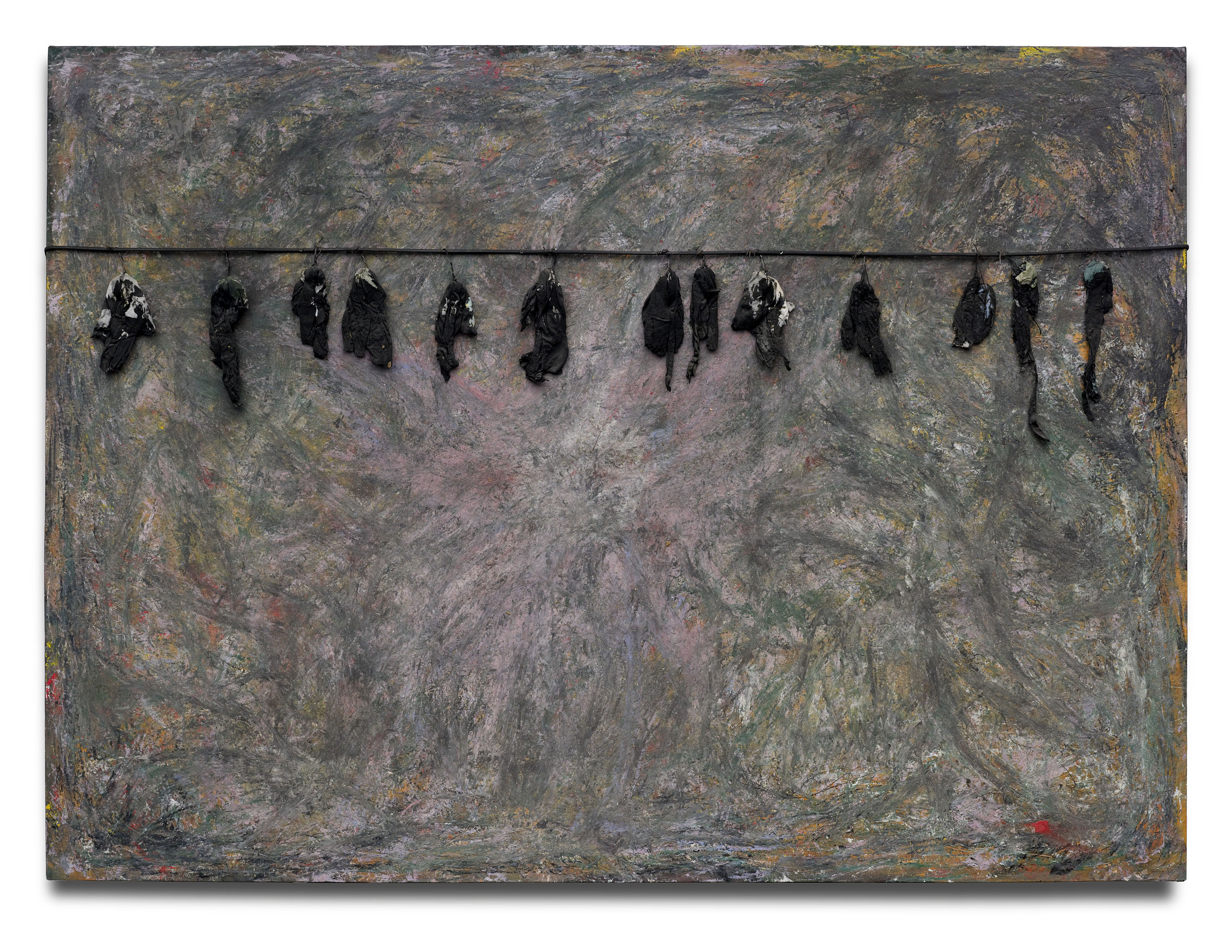 “Green Pastures — The Birds That Didn’t Learn How to Fly,” 2008. © Thornton Dial, image by: Stephen Pitkin/Pitkin Studio
Collection of the High Museum of Art

The painting is a historical heartbreak. One of a series, it shows figures of birds constructed from work gloves hanging on a line, a reference to the historical atrocities that people of color have endured in the U.S., Cubbs said.

In the background is a “green, enigmatic field of color,” Cubbs said. That, along with the piece’s title, makes reference to Psalm 23:2, which speaks of comfort and relief from suffering in “green pastures.” Cubbs called it “a Biblical reference to the world beyond physical and historical adversity, and the final place of redemption for those who suffer oppression in this world.”

Jones said the figures could also be interpreted as a “statement about lost potential.” 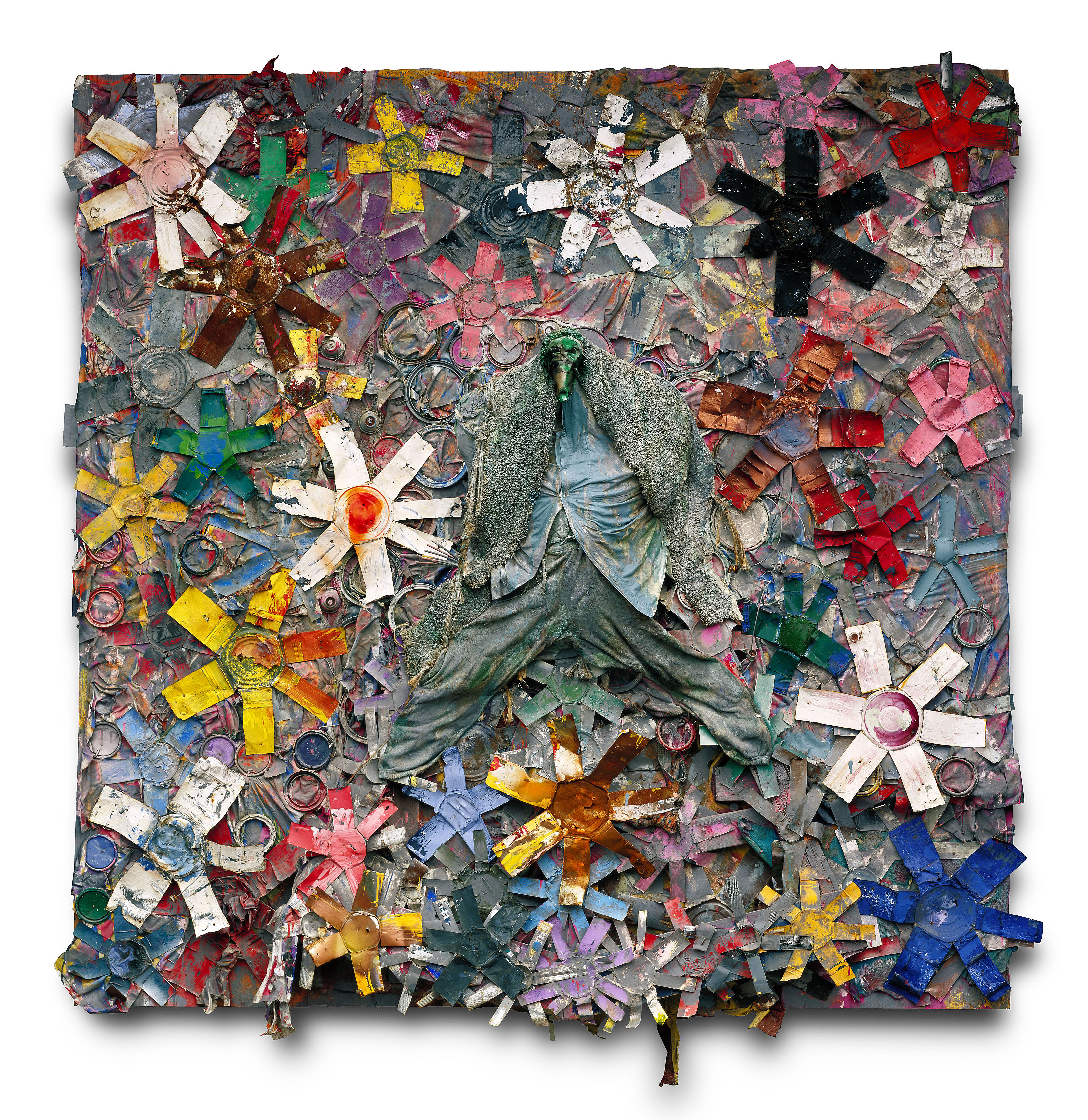 At the center of the painting: a half-buzzard, half-American eagle figure, downtrodden and bloated.

Constructed from a background of paint cans, split open to form the shape of stars, the painting positions the central figure as an entity that presides over his own artistic materials. Jones said he has always thought the piece was a self-portrait of Dial.

By 2004, when Dial created this piece, he had gained fairly widespread recognition in the art world. The positioning of the figure, along with the materials used to create it, speak to Dial’s reaction to that success and the struggle to gain it. It also speaks to the idea of power in general and who wields it, Wardlaw said.

The figure itself is partially constructed from carpet, an illusion to the social oppression of black men, and “presides over a universe fashioned from his used paint cans,” Cubbs said. “He is, in a sense, satirizing the notion of celebrity here, as well as representing a kind of genuine quest for success.”

Jones called the piece “a lighthearted way of speaking to what was happening in his own life with his work.”

Left: Artist Thornton Dial worked with everyday materials to create paintings and assemblages that drew critical admiration and comparisons to Jackson Pollock. He died Monday at the age of 87. Photo by Stephen Pitkin/Pitkin Studio