Thousands are missing in Syria. A new exhibit bears witness to their absence

When Mansour Omari was released from Syrian prison in 2013, he carried precious cargo in the folds of his shirt.

Sewn into his clothes were five worn pieces of cloth containing the names of his 82 cellmates, carefully inscribed using a chicken bone, their own blood and rust from the prison walls.

“The moment my name was called, my fellow detainees were around me, hugging me, crying, smiling,and asking me not to forget them,” Omari said.

The cloths are now on display at the U.S. Holocaust Memorial Museum’s Wexner Learning Center in Washington, D.C. They are part of “Syria: Please Don’t Forget Us,” an exhibit opening this week that highlights the ongoing plight of Syria’s missing citizens.

Amnesty International reports that tens of thousands of Syrians who have disappeared are incarcerated in underground government prisons.

“It is ironic that the worse the conflict gets, the more people…tune out,” said Cameron Hudson, director of the Holocaust Museum’s Simon Skjodt Center for the Prevention of Genocide. “So how do you penetrate their consciousness, and how do you remind them that this is still going on?” 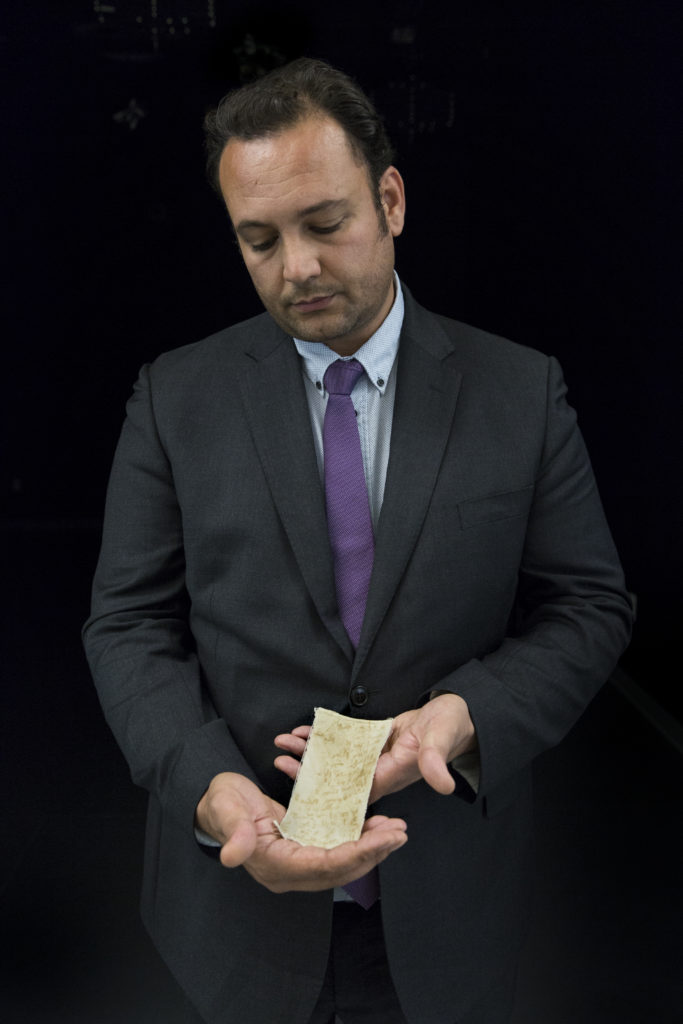 Americans were tuning out news about the war in Syria as early as 2013, according to the Pew Research Center, whose study that year showed only one in five news consumers followed Syrian developments closely. The same study found that 18 percent of Americans followed the news of chemical weapons being used against Syrian civilians. It ranked below 11 other topics including the selection of the new pope and a Texas fertilizer plant explosion.

The Syrian civil war, now in its seventh year, is winding down. President Bashar al Assad remains in power, and Atlantic Council fellow Faysal Itani told the PBS NewsHour last month that Assad is likely to stay there with Russia’s backing.

Meanwhile, the Holocaust Museum hopes to keep the conflict in the public eye.

Prior to his arrest, Omari worked at the Syrian Center for Media and Freedom of Expression, an NGO that defends journalists and others in the media industry by documenting human rights abuses. Omari and his fellow activists were arrested by government officials when the center was raided in 2012.

“We were not hiding anything. We know that it’s dangerous,” Omari said. “The offices [were] raided more than one time before, but this time was the only time that they took us and they disappeared us.”

Forced disappearances have been a common tactic of the Syrian regime since the war began. An estimated 85,000 people have gone missing since 2011. Once disappeared, Omari said, family members are often left in the dark. Asking about missing relatives is also dangerous.

Sara Afshar, a filmmaker who first documented Omari’s story in “Syria’s Disappeared: The Case Against Assad” and connected him with the museum, said she has never worked on a documentary with so much evidence of wrongdoing.

“This is happening right now,” she said. “This isn’t history. As we’re having this conversation, there are people being tortured in these clandestine facilities and we have so much evidence about that.” The first U.S. screening of the film was held at the U.S. Holocaust Memorial Museum.

Another piece of the exhibit comes from “Caesar,” a Syrian government defector who photographed corpses of Syrians who died in detention. These images, as well as the memory card and cell phone he used to take and store them, are on display. He hand delivered them to the museum when he testified about the abuses in Washington in 2014.

The inscribed cloths are the exhibit’s centerpiece.

“It’s not your traditional museum exhibition, in that, we tried to create this immersive, experiential room where you meet the cloths,” the exhibition’s curator, Jill Savitt, said.

In that room, Omari’s voice, reading the names of the 82 prisoners, is piped through speakers. The lighting casts shadows onto a maze of opaque screens, giving viewers the feeling they are walking with a group of unidentifiable figures.

Savitt hopes the exhibit will “shake people’s lapels” and make the public care about the names they read and hear at the museum, to “sear into people a desire to learn more, to tell others, to remember.”

“It is ironic that the worse the conflict gets, the more people…tune out.”

As the war comes to an end, human rights groups are calling for leaders to hold the Syrian government accountable for its secret arrests, and many of them renewed the demand for action in August of this year on the International Day of the Disappeared.

Most of Omari’s fellow detainees were university students studying engineering, literature and journalism before they were taken, he said. Others were residents of neighborhoods arbitrarily raided after a protest had taken place. Media activists and doctors were also regularly detained.

In prison, cellmates were kept three floors underground in a radar facility that housed computer equipment, and never saw daylight, Omari said. There wasn’t enough room for everyone to lay down at once, he said in his museum testimony, so they slept in shifts.

They were forced to wear blindfolds at all times and were beaten if caught peeking out from under the cloth. Meals consisted of a few olives, bread and rice. Medicine and health care were nonexistent, and many of the men were often sick or wounded. To keep himself sane, Omari taught English.

Omari said this exhibition was a fulfillment of his promise to his fellow detainees.

“For me and many other Syrians,” he said, “we cannot live without hope.”

Left: A close view of one of the cloths Mansour Omari and a few prisoners used to record the names of those imprisoned in an act of defiance against the Syrian government. The ink is made of blood from the gums of a prisoner and rust from the prison cell bars. Photo by U.S. Holocaust Memorial Museum