Today’s tool concerns the extension of the Bush tax cuts and comes via the Washington Post, which generated the interactive graphic some time ago.

But it’s as timely a tool as ever, given that the Senate vote Monday night paved the way to extend the cuts for two years. If House Democrats don’t block it, “Option Two” in the Washington Post graphic is the one to click. The other options show, quite graphically, what we’ll be giving up.

The bill also includes new tax breaks, not in the graphic, and an extension of unemployment insurance. Here’s the NewsHour write-up.

And here’s a link to our coverage of the 99ers — those whose benefits have run out after 99 weeks.

More breaking news below as it wafts in, but since this is a Tool$ post, a bit more about the WaPo’s chart, which allows you to visualize the consequences of extending the Bush cuts or NOT extending them – for seven different income groups, each represented by a different bar of color, which I try to approximate in words below: 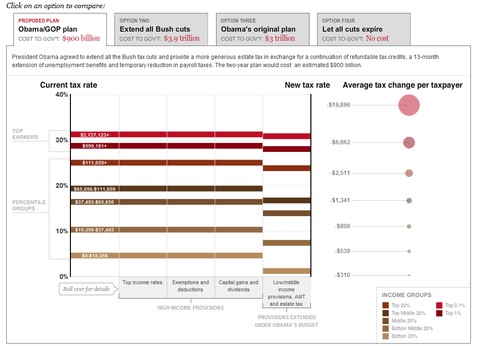 When looking at the graphic, it may help to emphasize that the percentages on the left (vertical) axis are “tax rates.” If you click on Option Four: “Let all cuts expire,” you can eyeball the difference by comparing where each bar starts on the left and winds up on the right.

A warning: I struggled with this graph for quite awhile before mastering it – a case of TMI, perhaps. But the I (information) is certainly useful and vividly presented. The key is the “Average tax change per taxpayer” balloons on the far right (if you’ll pardon the expression). They clearly demonstrated who loses disproportionately if the tax cuts are not extended in full – and conversely, who gains if they are.

This update on where the bill stands from the Washington Post:

A sweeping tax package negotiated by President Obama and Republican leaders has won 60 votes in the Senate, enough to end debate and move to final passage as soon as Tuesday night. A final tally may not be available for hours, however, as the vote was being held open to accommodate senators traveling back to Washington.

If approved by the Senate, the measure would go to the House, where many Democrats are more reluctant to back the compromise, which would extend tax breaks enacted during the Bush administration for taxpayers at all income levels, including the very wealthiest households. Many House Democrats are particularly upset about a provision that would exempt estates worth up to $10 million from a revived estate tax.

Earlier Monday, House Majority Leader Steny Hoyer (D-Md.) said the House may try to amend the terms of the estate tax, a risky move that would sent the bill back to the Senate and potentially upend the bipartisan compromise — increasing the odds that a host of tax cuts could expire on New Year’s Eve.

See the graphic from the Washington Post, “What the tax extension means for you,” here.

Tool$ Tuesday is a recurring feature on Making Sen$e where we highlight online calculators and tools that Paul Solman or others on the Making Sen$e team have actually used. The primary purpose is to present tools we have found helpful in understanding and even making economic decisions for ourselves. Sometimes, the purpose is simply to visualize data or a complex issue.

– The Great Tax Cut Debate, from Business Week magazine, does a fine job of itemizing the elements of the Bush Tax Cuts and who supports what.

– Bush Tax Cuts, a look at how the tax cuts might be implemented and what it means for you, from the Tax Policy Center.

Two appeals to you who read this page. First, let us know which you find useful. Second, if you’ve found others you like that aren’t included on this list, let me know.