All That Jazz and More: Trombone Shorty’s ‘Supafunkrock’ 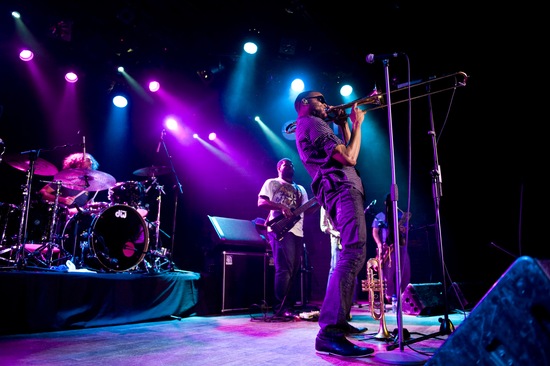 The New Orleans musical tradition, as storied and varied as it is, can add a new name to its impressive list of native sons and musical styles: Trombone Shorty and his “Supafunkrock.”

Troy Andrews, who’s better known by his stage name, “Trombone Shorty,” is among the most recent musicians to break out from New Orleans, but he’s no newcomer to the music scene. “I may be young,” says the singer, trombonist and trumpeter, “but I’m not new.” Andrews began playing horn at age 4 in funeral bands, and at age 6 was touring and playing both trombone and trumpet in a jazz band led by his older brother James.

Now, at age 24, Andrews and his band, Orleans Avenue, formed with several friends from his Treme neighborhood, have been touring nonstop around the world. In 2010, they released their Grammy-nominated debut album, “Backatown,” launching them onto the international music scene. On their latest album, “For True,” they continue to evolve their “Supafunkrock” sound, merging traditional brass instrumentation with the popular music Andrews grew up with.

“No matter what setting I play in, I will always be New Orleans,” says Andrews, who credits Treme for his musical foundation. “It’s one of the only cities where you can hang out with the Marsalis family, the Neville brothers, whoever it might be, and we all play together.”

Art Beat recently caught up with Trombone Shorty at the 9:30 Club in Washington, D.C.:

Located in New Orleans’ 6th Ward not far from the French Quarter, Faubourg Treme is considered America’s oldest black neighborhood. It has been a significant African-American economic, political and cultural center for two hundred years, and was recently brought into the spotlight by the HBO drama series, “Treme.” (Andrews has made numerous appearances on the show.) During the 19th century in the neighborhood’s “Congo Square,” a melting pot of Creole, African, Caribbean and Latin American cultures produced the roots of jazz music.

Andrews’ desire to carry on the New Orleans tradition doesn’t keep him from putting his own twist on it. His music defies any particular genre. Rather, it brings together old and new styles of jazz, which he fuses with rock, funk, soul and hip-hop to create a musical gumbo that he calls “Supafunkrock.”

Still based in New Orleans, Andrews lends his support to the next generation of musicians through the city’s renowned Roots of Music program, which helps develop the musical talents of youth in New Orleans.

“Music should be pushed forward. Fifty years from now, if my music becomes the standard to young kids or something, I’m not expecting them to keep it alive. I’m expecting them to learn from what I’ve done and take it and push it toward what they are doing,” he says. “People get caught up in recreating something, and that actually hurts the genre of music because there’s nothing new.”