How this NewsHour reporter became a zombie

Editor’s Note: In November, the NewsHour’s Mike Melia reported on Sam Suchmann and Mattie Zufelt, two teenage filmmakers who raised more than $68,000 in wildly successful Kickstarter campaign to make a zombie movie. This summer, Melia was asked to be a zombie extra. Video shot by Tim Forster and edited by Ariel Min.

It’s rare to witness someone’s dreams come true, even if they are the stuff of nightmares.

I first spoke with Sam Suchmann and Mattie Zufelt on the phone back in October. I had seen their Kickstarter video the day before and knew they were onto something. A week later, I arrived at Sam’s house in Providence with a local Rhode Island camera crew. It was their first TV interview. 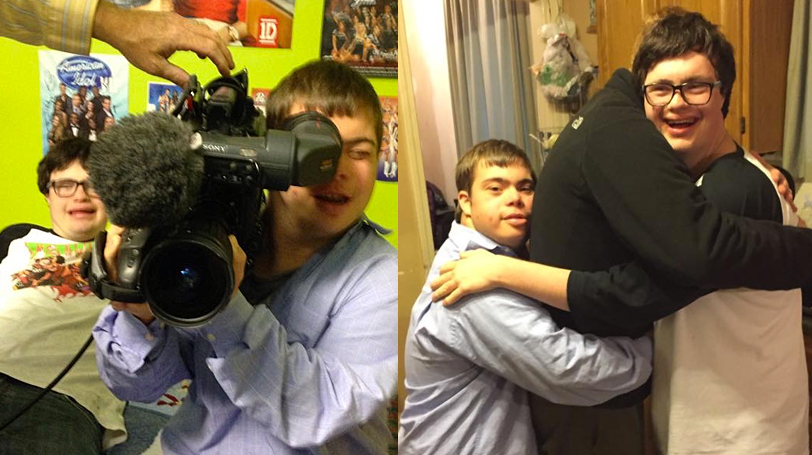 They were naturals on television. And before we turned off our cameras, Sam removed a folded-up piece of paper from his pocket, and began to read this message: “My whole life,” he read, “I feel like I never fit in anywhere or had a voice, but someday that will change. I will be somebody. And that day is today.”

In many ways, Sam was right: their lives were about to change dramatically.

It all began two years ago when Sam and Mattie had the idea for an epic zombie movie. It would include romance, action and betrayal; heartbreak, redemption and sex. They drew up storyboards, talked constantly about it with family. And their mission was to raise not only the $50,000 for the teen zombie movie, but also enough for a documentary on the making of the film. In the end, they pulled in $68,936 from 1,494 backers.

“I kept hearing the same scenes come up,” Jesse Suchmann, Sam’s older brother told me. “And I was like, do you have like a plot for this worked out? And he did. And so I realized, before we tried to do it in a DIY way, it might be best to just go big.” Jesse Suchmann managed the Kickstarter, and with the help of childhood friends Bobby Carnevale and Tim Forster, they did just that — they went big.

They brought in producers and a camera crew from New York. They hired Silver Scream FX Lab out of Atlanta to do makeup. During their 16-day shoot, which they just wrapped, there were stunt professionals on set, filming in multiple locations from a city courthouse to a boat.

The best friends, now 19, first met at the Special Olympics in grade school. Both have Down Syndrome, but family members say that’s beside the point. They’re just honest, awesome dudes. 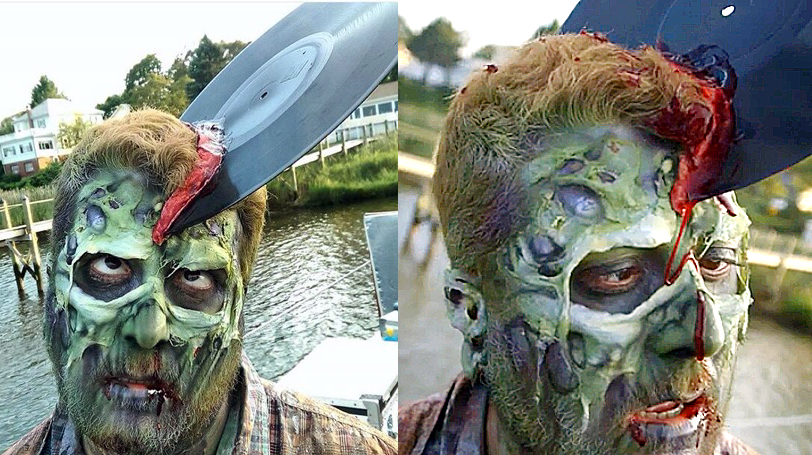 In fact, Microsoft named Sam and Mattie their official “spokesdudes” for the World Games of the Special Olympics in Los Angeles this summer. They visited Hollywood, where they rubbed elbows with celebrities like Vanessa Williams, Michael Phelps and Maria Schriver. In addition to the NewsHour, Sam and Mattie have been profiled by local news, Buzzfeed, even People Magazine and the Today Show. And two weeks ago, they invited me back to Providence to visit the set and be a zombie.

I arrived at 8 a.m. on a Tuesday morning. It was their 11th day of shooting. One of the original storyboards called for a big cruise ship party. They were on their second day filming on a yacht, donated by a family friend of the director.

It took about 30 minutes to be transformed from a mild-mannered reporter to a legit zombie.

On Sam and Mattie’s original wish list were celebrity cameos. Topping that list was The Jersey Shore’s DJ Pauley D. He had been there the day before I arrived, I was told, DJ’ing the zombie boat party.

I hung around for part of the morning before heading to makeup. It took about 30 minutes to be transformed from a mild-mannered reporter to a legit zombie. My close-up came later in the day when a vinyl record split my head.

Peter Farrelly, a film producer behind hits like “Dumb and Dumber” and “Something About Mary,” was also on set. He, too, was taken by the Kickstarter video and has offered his support along the way. His daughter made her own contribution as a background zombie. And many involved in the film had a personal connection to someone with a developmental disability. For me, that’s my aunt and godmother, Lois Melia.

“Once you meet them there’s no going back,” said Bobby Carnevale, the film’s director. “There is such an energy about them … They exude this energy that’s amazing, and people want to be a part of that, of watching this magic happen.”

They have more than 300 hours of video for the documentary. Tim Forster is leading that project.

“We’re always thinking about the doc, but want to get the feature out too,” Forster said. “That will be our way of sharing with the world who Sam and Mattie are, and hopefully, people will want to come back and see the story of how they made their movie.”