Yussef El Guindi flips through the pages of his newest play. Seated next to the director, he follows along with the actress who is rehearsing her lines in the small rehearsal room at Theatre Puget Sound.

The play, set to open in Seattle, is Collaborator — a one-woman show in which the character, an American woman, is speaking directly to the audience about her history with men, including an experience of sexual assault. El Guindi doesn’t mince words, and the lines she speaks, though filled with humor, are explicit enough to be jarring. And that is clearly his intention.

“The first act really plays like a bedroom comedy and the second act becomes more and more serious in tone as we begin to learn about what happened to the central character, Leila,” El Guindi said. The genesis of the play stems from events that occurred during the 2011 Egyptian revolution, when a number of women were sexually assaulted. 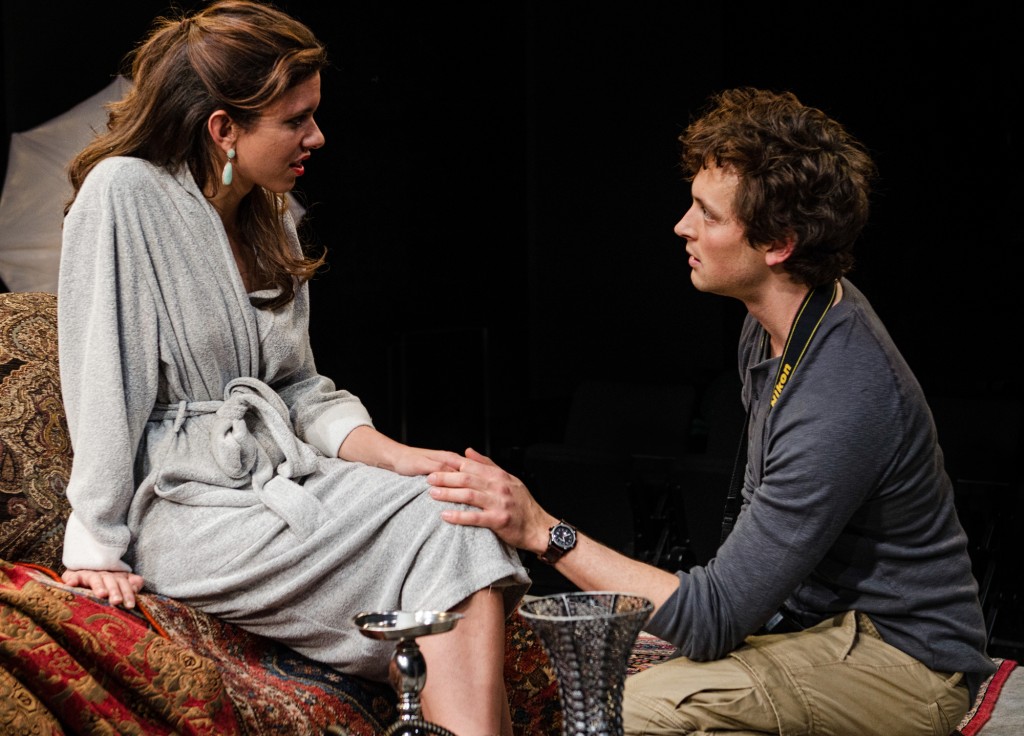 Stories of immigrants, particularly Arab-Americans, are a common thread in many of El Guindi’s plays. It’s an experience that El Guindi knows intimately, being born in Cairo, raised in London and then moving to the United States. “I’ve been an immigrant since the age of 3,” he said. “Even returning back to Cairo, I felt slightly like a foreigner there,” said El Guindi of his return to study English at the American Univeristy in Cairo.

His play Musa and Sheri in the New World is about a doomed romance between an Arab immigrant and a American waitress. In 2012, the play won the $25,000 Harold and Mimi Steinberg/ATCA New Play Award, which honors best American scripts premiering outside of New York City.

“I pick Arab-American or Muslim-American characters because it’s easier for me to make references to those cultures,” explains El Guindi. “It’s a way of saying, well, you know, your perception of Arabs and Muslims may be this, but actually, you’re probably wrong, given what you’re exposed to in the mainstream media.”

El Guindi comes from a literary family. “My grandmother was a [magazine] publisher in Egypt, my uncle was a writer, and my grandfather was a theatre director,” he shares. He likes to joke that he is living out his ‘plan B, ’ a backup to his initial plan, or ‘plan A,’ of becoming an actor.

“I love to act and acting was my first passion.” In fact, for graduate school he applied to several acting programs but the one he was accepted into was the playwriting program at Carnegie Mellon University. When the acting career didn’t take off, El Guindi stuck to writing, his plan B. To date, he has authored numerous plays, many of which have been performed in Seattle and beyond.

The number of Arab-American playwrights is small but increasing, El Guindi said. “They’re making some headway, but it’s still a challenge because … I think theaters still are adjusting and trying to figure out culturally where these plays fit in.”

El Guindi’s next play is “The Talented Ones.” It addresses what attaining the American Dream means for immigrants. The play has been selected for production in 2017 by the Artists Reperetory Theatre in Portland.

This story is part of the Borders & Heritage immigration series produced by PBS member station KCTS 9 in Seattle. Local Beat is an ongoing series on Art Beat that features arts and culture stories from PBS member stations around the nation.