As the U.S. combat mission in Afghanistan prepares to wind down later this year, more American veterans are returning home and struggling to process their wartime experiences. A powerful new online exhibit has created a unique platform for them to tell their own personal stories. “War Ink” uses tattoo art to spark conversations with Iraq and Afghan war veterans about their time in combat and the fallen comrades they lost along the way.

The San Francisco Bay Area’s Contra Costa County Library launched the project in conjunction with StoryCorps’ Military Voices Initiative, photographer Johann Wolf and filmmaker Rebecca Murga. California has the largest population of veterans of any state in the nation — nearly 2 million. About 540,000 of them are veterans of the Gulf, Iraq and Afghan wars. 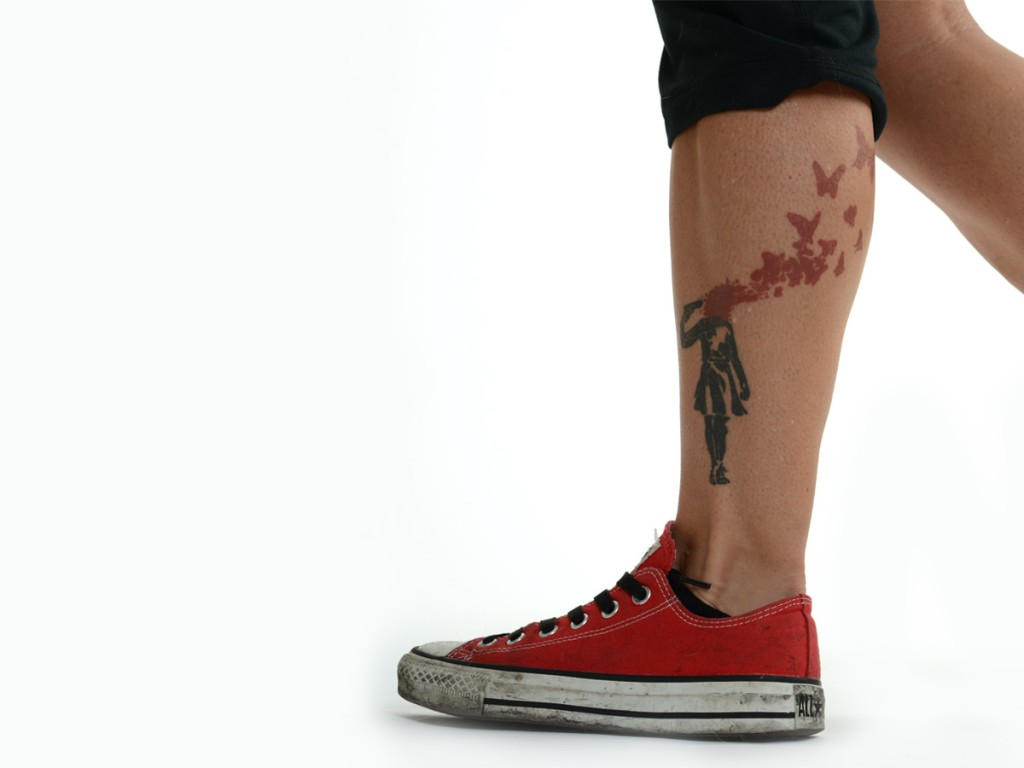 Heather Hayes was a special purpose and heavy equipment diesel mechanic with the Air Force. She was deployed to Iraq and Afghanistan, volunteering for road convoy duty, before returning to the U.S. in 2014. Photo courtesy of Johann Wolf

Jason Deitch is one of the exhibit’s creators. The former U.S. Army veteran and military sociologist told Art Beat, “These tattoos are an expression from a community that doesn’t openly discuss or express emotion.”

“We understood these tattoos to be uniquely valuable, as veterans largely return home to a community that doesn’t know their story and how war changed them,” Deitch said. “That can be an incredibly isolating experience, but we saw how ‘War Ink’ could be that bridge that brings veterans out of isolation by helping people back home understand them.” 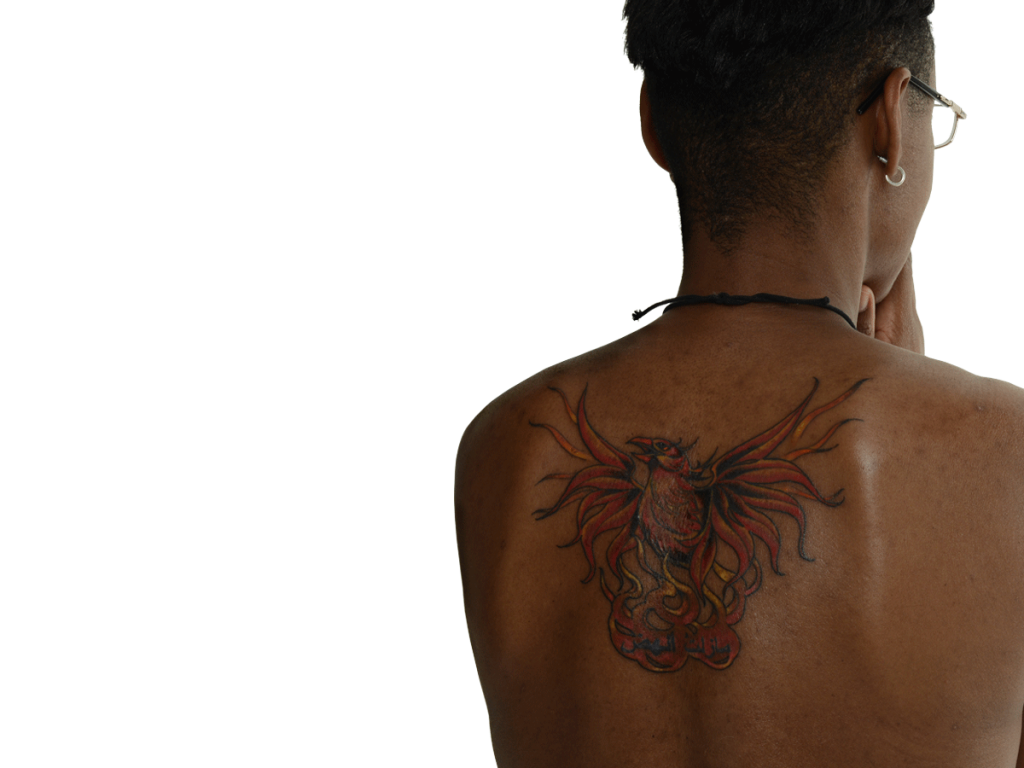 Tracey L. Cooper-Harris served with the U.S. Army & National Guard from 1991 to 2003, during which time she was deployed to Iraq and Afghanistan. Photo courtesy of Johann Wolf

The virtual exhibit features video, photography and audio interviews of men and women from all branches of the military telling their combat stories in their own words. Their personal accounts evoke pain, raw honesty, hope and dark humor.

Twenty-four veterans from across California bravely shared their stories and body art for the cameras. Deitch told Art Beat recruiting veterans for the project was “extremely difficult.” He and the exhibit’s other creator Chris Brown — a senior manager at the library — contacted every student veteran group and veterans center in 16 California counties — as well as over 500 tattoo shops.

For some like U.S. Marine Corps veteran Jose Cruz, the project was cathartic. “War Ink made me really dig deep and reflect upon my experiences and how they have shaped the person that I am today, and how they have changed me from the person that I was,” Cruz said. “We want to reveal and educate the nation on the true identities of the people that go off to protect the freedoms many take for granted.” 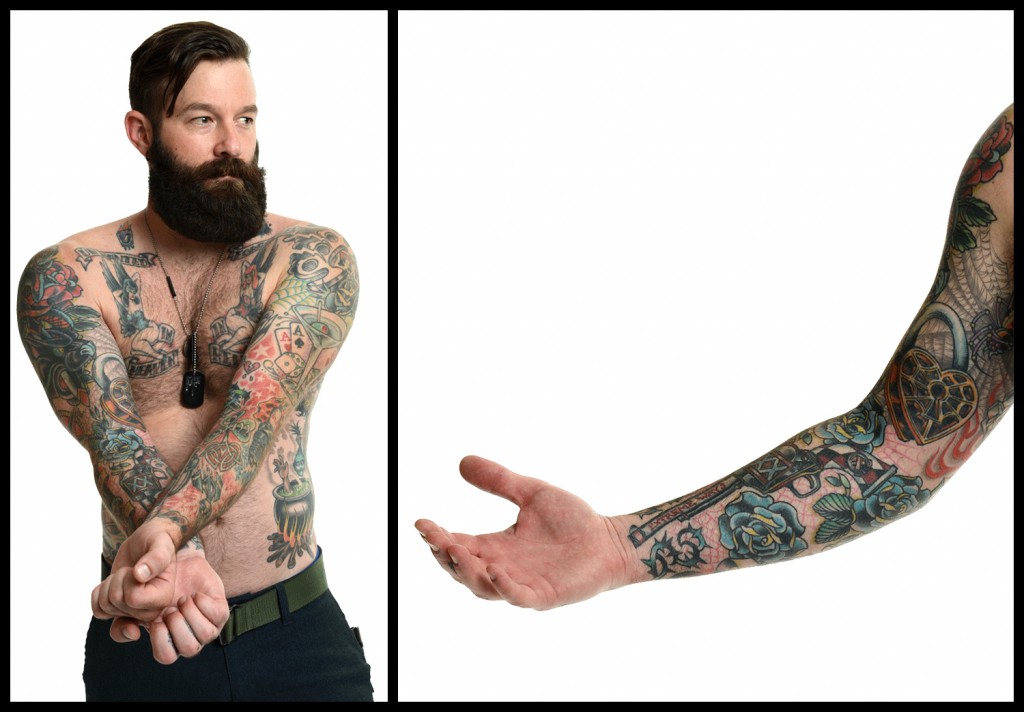 Ryan Leva of Santa Cruz, California served as a Military Policeman in the U.S. Army in the Karbala and Abu Ghraib areas of Iraq. Photo courtesy of Johann Wolf

Another participant, U.S. Army veteran Ryan Leva said, “I think it is really important for us to share a dialogue with the general public about our experiences overseas in order to bring a greater awareness about not only what we go through, but also the struggles faced when we come back.”

“The story never ends for us war fighters when we return home from the battlefield,” said Zakaria Bass, who served as an Army infantryman in Iraq and was also featured in the project. “Supporting the troops is much more than a bumper sticker on the back of a vehicle.”

You can view the full “War Ink” multi-media exhibit online at www.warink.org.

Left: Navy veteran Joel Booth served with distinction until he was injured in an IED attack in July 2011. He is now training to become a paramedic. Photo courtesy of Johann Wolf