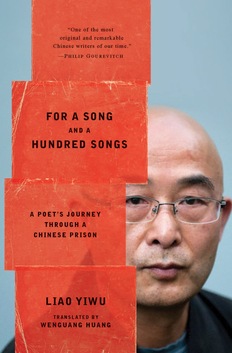 Liao Yiwu was in his early 30s when he was arrested for writing and performing a poem about the brutality of the Tiananmen Square Massacre in 1989. His poem — simply called “Massacre” — was an angry, howling rant against the government and a plea for support for the fledgling pro-democracy movement.

For his words, Liao served four years in jail, where he was repeatedly beaten and tortured. Twice he tried to commit suicide. But his life turned around when he met a fellow political prisoner: an 84-year-old monk who showed him that music could be his salvation.

“He told me that you will never have freedom, if you don’t have freedom in your mind. And so he taught me to play the flute,” Liao Yiwu told the PBS NewsHour. A new memoir about his time in prison has just been published by Houghton Mifflin called “For a Song and a Hundred Songs.”

Liao said he felt he had to write the book to make sure the stories were not covered up. “I needed to write it down so I wouldn’t be forgotten like a stray dog,” he said.

Growing up in the Sichuan province during the Cultural Revolution, Liao received little formal education. But he learned traditional Chinese poetry from his father, and found his own way to the American beat poet Allen Ginsberg. He said he was never a political writer or activist, until he saw the events in Tiananmen Square unfold. “It changed my life,” he said. “I felt helpless.”

After writing “Massacre” and surviving prison, Liao continued to write, often about the people from the lowest rungs on the social ladder.

“I was with people who lived in the bottom of the society. And when I came out of prison, I was also living at the bottom of society. I know these people, the people of really low social status. And in these people, I see my own shadow. The so-called elite don’t care for us, but we are the mainstream of society.” He said even after he was released from prison, government officials continued to watch, harass and deny him visas to travel abroad.

His friend, Tienchi Martin-Liao, is the editor of the Independent Chinese PEN Center. He says the government felt threatened because of the negative portrayal of Chinese society. “If someone writes fiction or a novel, it’s okay. But he writes in a reportage style. And if people read it, they know it’s the truth. It’s not imagination. So the local authorities don’t like that.”

Two years ago, Liao escaped China and now lives in Germany. But he continues to write and tell his country’s story. “Young people don’t even know what happened in 1989. They first find out when they go abroad to Western countries. But sometimes even then they don’t believe it. The Communist Party has tried to eliminate parts of history. That is bad for the younger generation. If they don’t have this historical consciousness, they will just focus on getting material goods. We have to work on that so everybody knows what happened.”

Wednesday on the PBS NewsHour, Jeffrey Brown profiles Liao Yiwu and his new memoir, “For a Song and a Hundred Songs.” You can read his poem ‘Massacre,’ for which he was imprisoned, on Art Beat now.