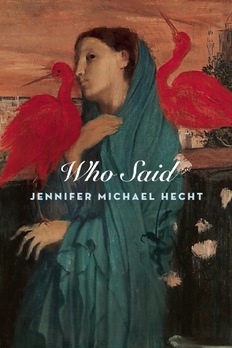 We speak of rebellion when the kid
is a hellion and the folks are so mild
as a spoon.

seem like reactors, turncoats
on how they were raised.
Let me offer another
concatenation
of this explanation. Think of your mother

as one discreet corner
of a person with a multiple
mental disorder.
You’re one of the others. One that split off.

Not a turncoat then, but the expression
of what was suppressed. This same woman,
your mother, who wants to help others,

also likes life as a racket
where the best finagler wins.

For reasons we do not fully assemble,
she cannot voice this redder side
of her nature, and the voicing of it,
that is you.

You are not teaching the former
generation.

Their frenzied distaste in certain directions
was the cue you used

to decipher the code
of just how you were not to do
as you were being told.

Jennifer Michael Hecht is a poet, historian, philosopher and author. She has written several books of nonfiction including “Doubt: A History” and “The Happiness Myth.” Her latest collection of poetry is titled “Who Said.” She teaches at The New School and Columbia University in New York.