What do trees mean to you? Here are 12 ways trees shaped readers’ lives

Our November pick for the PBS NewsHour-New York Times book club, “Now Read This” is Richard Powers’ novel “The Overstory.” Become a member of the book club by joining our Facebook group, or by signing up to our newsletter. Learn more about the book club here.

In Richard Powers’ novel “The Overstory,” trees are the main characters. But it’s also a story about how people from different walks of life decide to take action to defend these beings from destruction.

When our book club began reading the novel, our pick for November, something unexpected happened on the club’s Facebook page. Hundreds of our members began sharing photos of trees and their experiences with them. Some shared what a specific tree had meant in their life, while others shared images of trees or tree science that astonished them, while still others shared what they could do to protect forests locally, nationally and around the world.

The posts came in so quickly our moderators had trouble keeping up. Much of “The Overstory,” which won the 2019 Pulitzer Prize for Fiction, is about how disconnected people are to the natural world. Book club members say the novel is making them want to reconnect.

“In my day-to-day life, I often take the trees around me for granted,” reader Leslie McFadden wrote. “‘The Overstory’ is waking me up! Trees impact us in many different and unique ways.”

Have trees shaped your life in a meaningful way? Do you have memories of a special tree? Feel free to share your story in the Now Read This group here.

Below are 12 of the posts that stood out to us:

Your stories about trees

“Thirty years ago, September, when my father was in the hospital dying, I brought him a chestnut from the chestnut tree outside the house … He looked at me, quizzically. I suppose he didn’t know he wouldn’t see the chestnut tree again. When he was a boy, he and his brothers would swat at that tree to get the chestnuts. When I was a child, my siblings and I did too. My brother would make me a ring with his pen knife. Through the years, children going by the house would do the same. My parents would tap on the window. You will kill the tree as I am sure my grandparents said to my father and uncles. Ten years or so ago, the utility company cut it down. It was interfering with the overhead wires. The rhododendrons along our front lawn died after that. They lost their shade in the summer sun. I still have that chestnut. Here it is. Still miss that tree, and other loving things.”

“As a child I remember loving the fig tree in our back yard supplying fruity delights. Occasional wasp stings sometimes came along with the figs. As an adult, remembering seven old diseased water oak trees that formed an inner perimeter of our 1884-built home. Having to terminate these old majestic wonders. Grieving while watching them being butchered up and carried off. A definite feeling of loss as they tumbled helplessly into the street before being carted off to who knows where. Then missing the squirrels, birds, and other creatures of the days and nights which called our trees home. Missing the leaves blowing and piling in our yard. Seven micro-ecosystems that quickly disappeared from our small parcel of space in a small town in East Texas.”

“As an adult I went through an emotionally difficult period in my 40s. I would walk a path in the woods where the trees offered some measure of peace. Eventually, individual trees came to inspire particular traits I needed to get through this tough time. First along a winding section of the path were a pair of oaks — one reminded me of the endurance I needed and the other of patience for the journey. Next a giant cottonwood with huge drooping branches seemed to shower me with compassion. And a little further along a surviving elm with two great upturned branches like arms and evidence of many cut branches gave me strength. Those walks with those trees forever changed me. I don’t walk there anymore but those trees still have great meaning in my life.”

“We had a huge elm tree in the backyard when I was growing up. My father would make us go cut a switch for a (largely ceremonial) spanking when we did something bad.”

“As a child I was wonderstruck by the Banyan tree in India. The progeny of the main tree is [the] roots coming down from the branches and turning into independent trees. This tree is the one in the book that saves the life of the veteran. This is a true tribe or a community of a single kind with the aged tree right in the center.”

“I used to climb a monster beech on my property and ride in the wind. Now they sort of mark history for me and make [me[ reflect on all they have witnessed.”

“We had a lemon tree in the backyard and we would make fresh lemonade with the lemons. Occasionally we tried eating them straight off the tree and our lips would pucker. Our neighbor had a jacaranda tree out front and I thought it was beautiful. We used to ride our bikes a few blocks away to where there was a pomegranate tree and pick the fruit, ride home and eat them.”

“When I was a kid back in the ‘60s I had a favorite tree I would climb and spend hours alone with my imagination. I was the queen of the neighborhood ruling from the highest branch.”

“My grandfather is a tree surgeon and had a ‘tree service’ company for all my life (it has since passed down to my aunt and uncle). I spent many a summer, winter and spring vacation and weekends cutting trees. Almost never clearing jobs; either private jobs (a great many after a storm knocked a tree or a part of a tree over on someone’s property) or contracts with the state which usually entailed clearing branches or trees along the roads from growing over the roads or into/over electrical wires/telephone poles. We would keep some of the logs, split and cut them during the summer, let them dry and deliver them to customers before or during the winter for firewood. I love trees (and wood); the sight of them, the smell of them, the thought of them.” 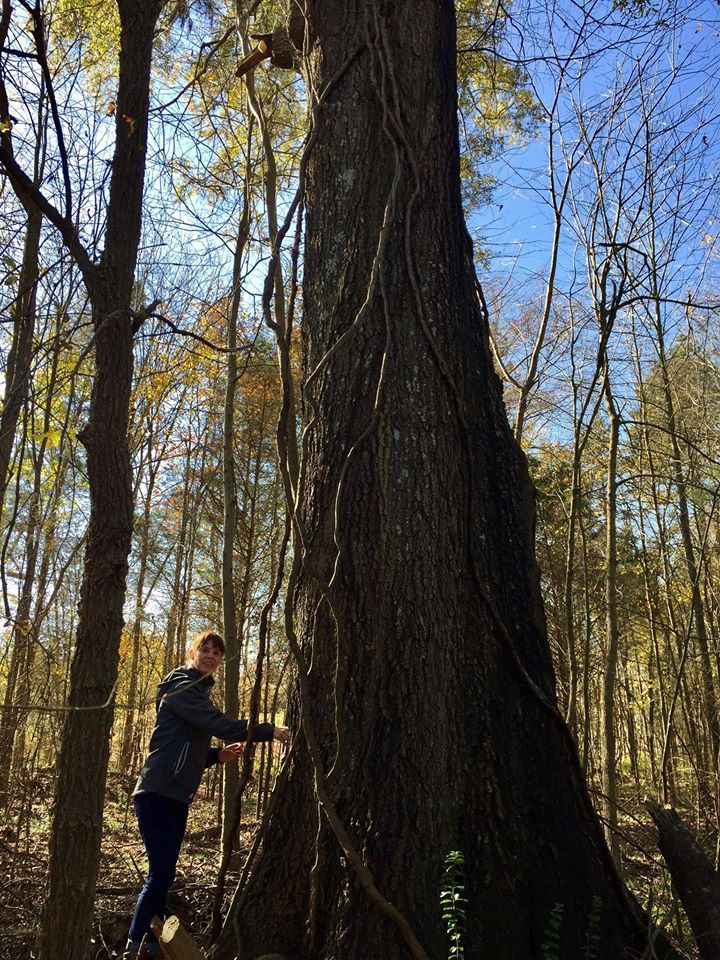 “The stories of people and their relationship with trees in ‘The Overstory’ makes me think of my daughter who suffers with epilepsy. She believes the trees on her property in North Carolina help her to heal during bad times.”

“We had apple trees which supplied the neighborhood with apples and us with apple pies. We lived in town … but near a hillside with lots of trees where we hiked, saw birds and other animals. Finally. My dad was a tree planter. We always dug our Christmas trees and put them in the yard for many years. Trees are life.”

“Let’s all plant a tree in honor of this outpouring of love.”

READ MORE: How ‘America’s perfect tree’ was nearly wiped out

Left: A volunteer holds a sapling. Photo by Desiree Martin/AFP via Getty Images

An Austrian art exhibit explores the value of nature