What’s the future for Myanmar’s architectural past?

With political reforms underway in Myanmar (formerly known as Burma), the once closed-off country is opening up to the world. That process is raising a new concern: How will economic development impact the country’s architectural and archaeological past?

PBS NewsHour has launched a new series called “Culture at Risk,” with Jeffrey Brown reporting from around the globe about various threats to cultural sites, including development, war and climate change.

In Yangon, the commercial hub of Myanmar, Jeff was given a tour by Thant Myint-U, a Harvard-educated historian who has returned to his native country to head up the Yangon Heritage Trust, an organization devoted to the preservation of colonial buildings.

Three hundred miles northwest of Yangon lies the ancient city of Bagan, which faces a different set of challenges in this new economy. Learn about those challenges through the photos below. 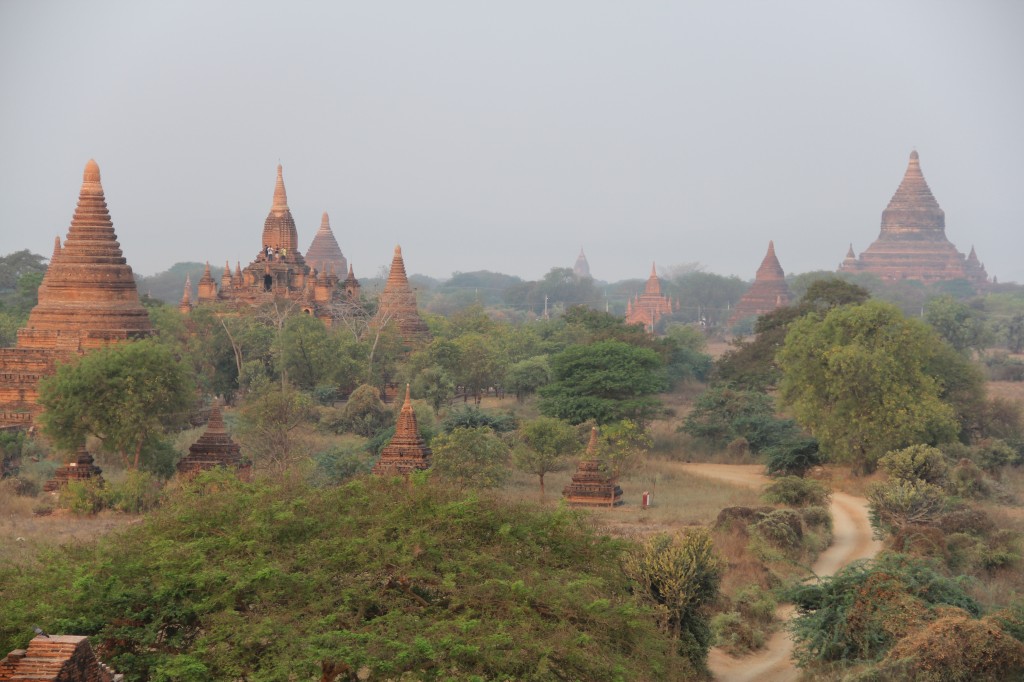 Bagan, the capital of a former Burmese Kingdom, is an archeological wonder dating back to the 11th century. It’s said to contain the highest concentration of Buddhist architecture in the world. Several thousand pagodas and temples in a variety of shapes, styles and sizes dot the landscape. Photo by Mary Jo Brooks/PBS NewsHour 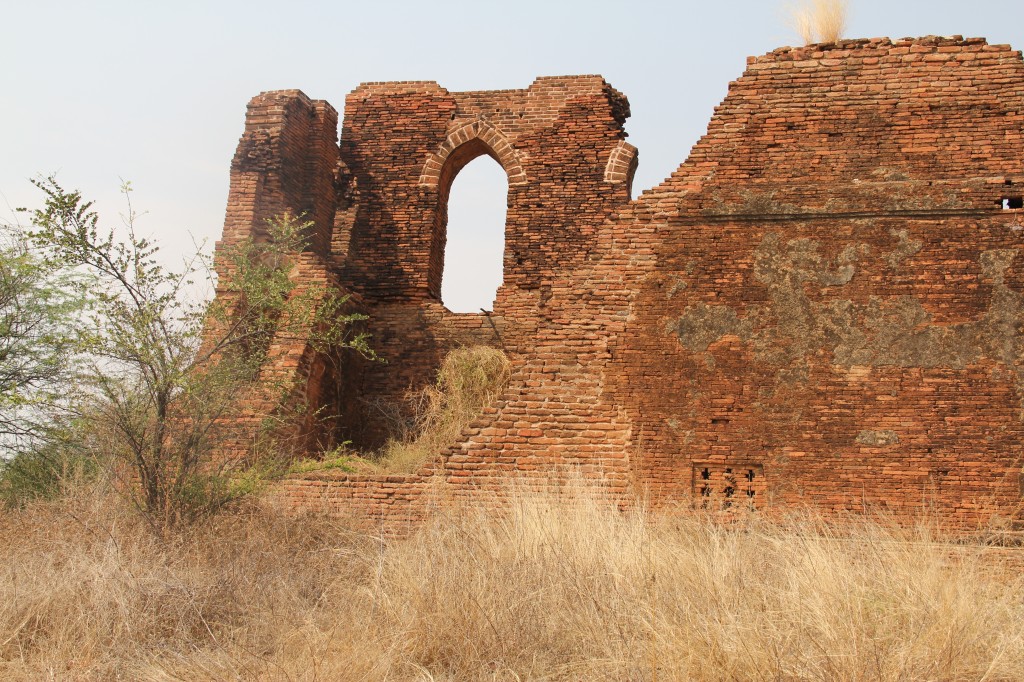 Over the centuries, earthquakes and other natural disasters have taken their toll on the temples. Only about half of the original 4,000 structures are still standing, and many of those are heavily damaged. Photo by Mary Jo Brooks/PBS NewsHour 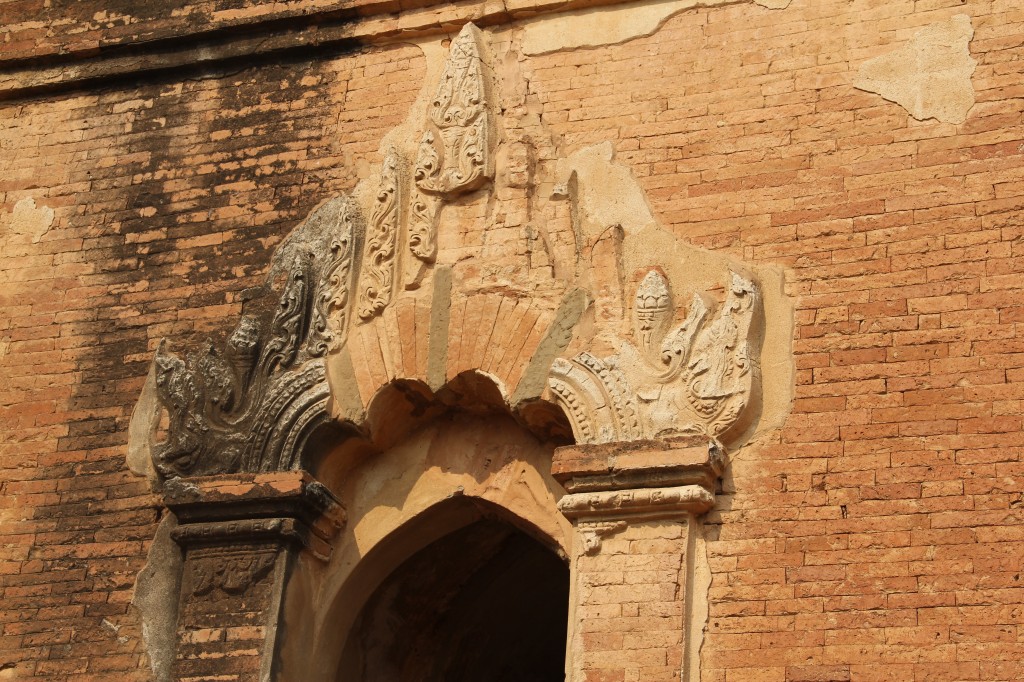 Restoration of damaged temples has been done very piecemeal, often with shoddy workmanship and not according to international standards. “These are living places of worship,” Deputy Culture Minister Sanda Khin told the NewsHour. “Our ancestors just wanted to preserve their precious temples. They didn’t know about international standards.” Photo by Mary Jo Brooks/PBS NewsHour 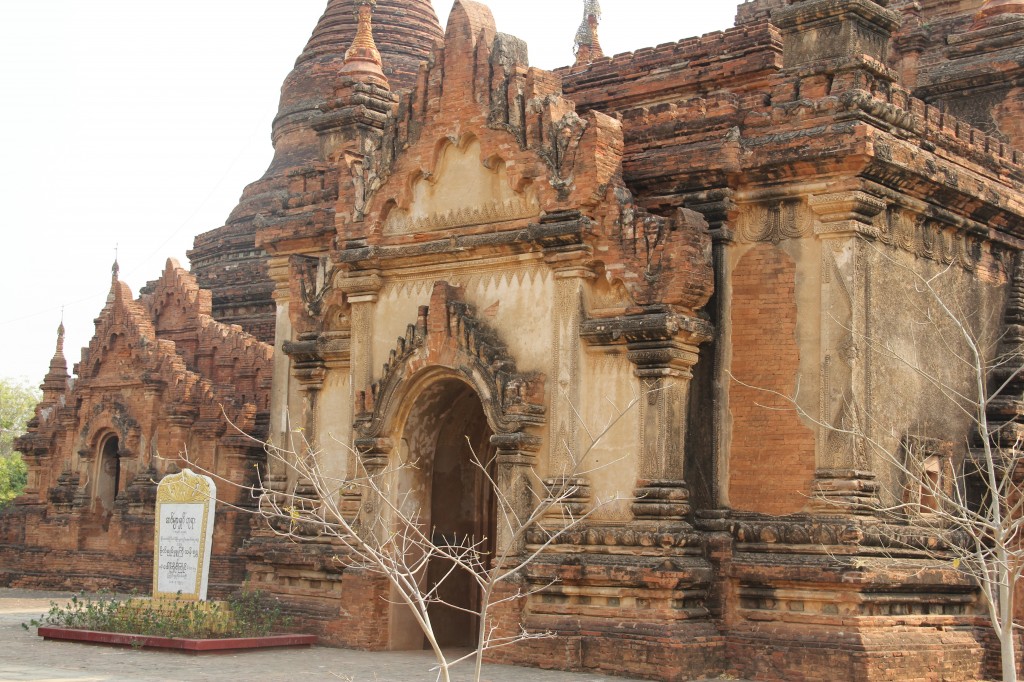 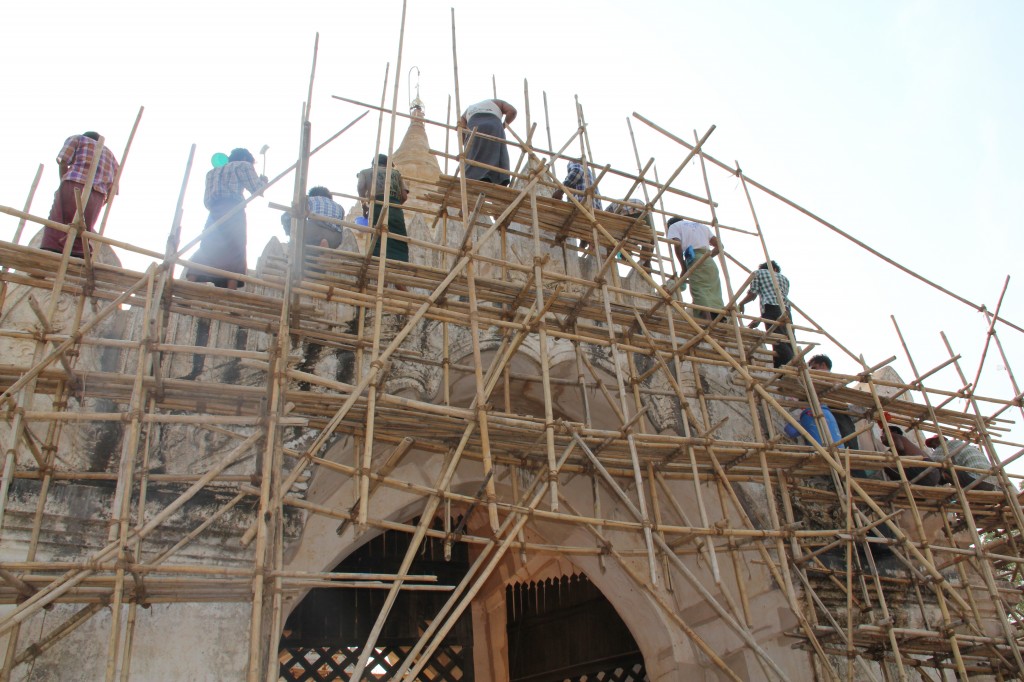 Internationally-sanctioned conservation work is now being done in Bagan. Here laborers scrub the harmful limestone coating off an archway at the Ananda Temple. It’s part of a $22 million, five-year joint project between the governments of Myanmar and India. Photo by Mary Jo Brooks/PBS NewsHour 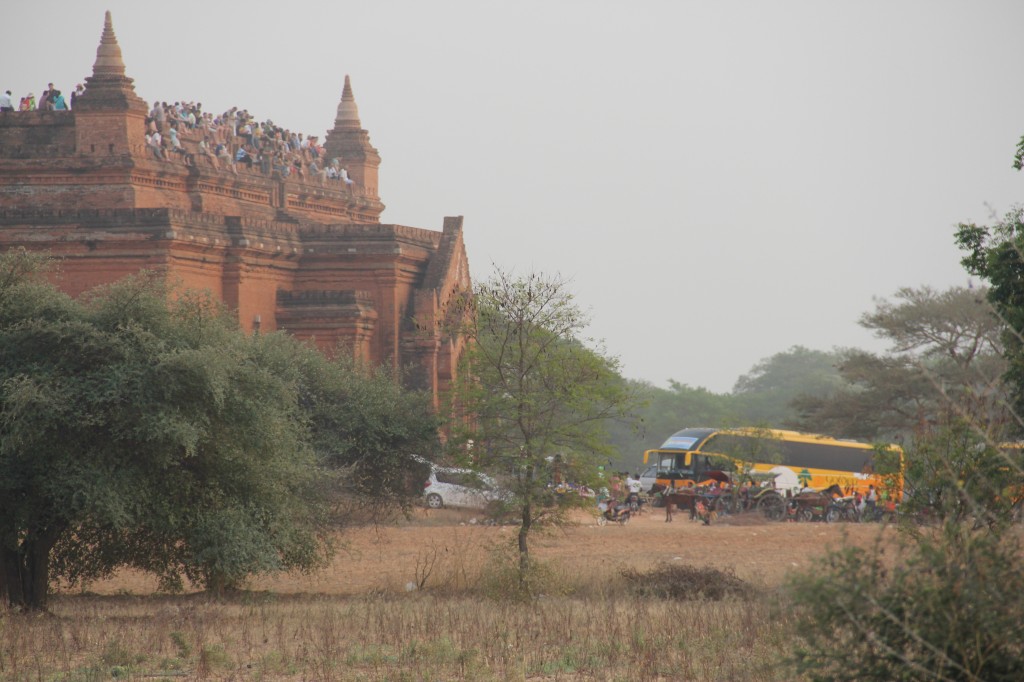 Now that the Myanmar government has launched economic and political reforms, tourists have begun arriving by the busload in Bagan. A favorite activity — watching the sun rise or set from atop a pagoda — has recently been limited to just a few sites. It’s part of the government’s plan to better preserve the monuments and control crowds. Photo by Mary Jo Brooks/PBS NewsHour 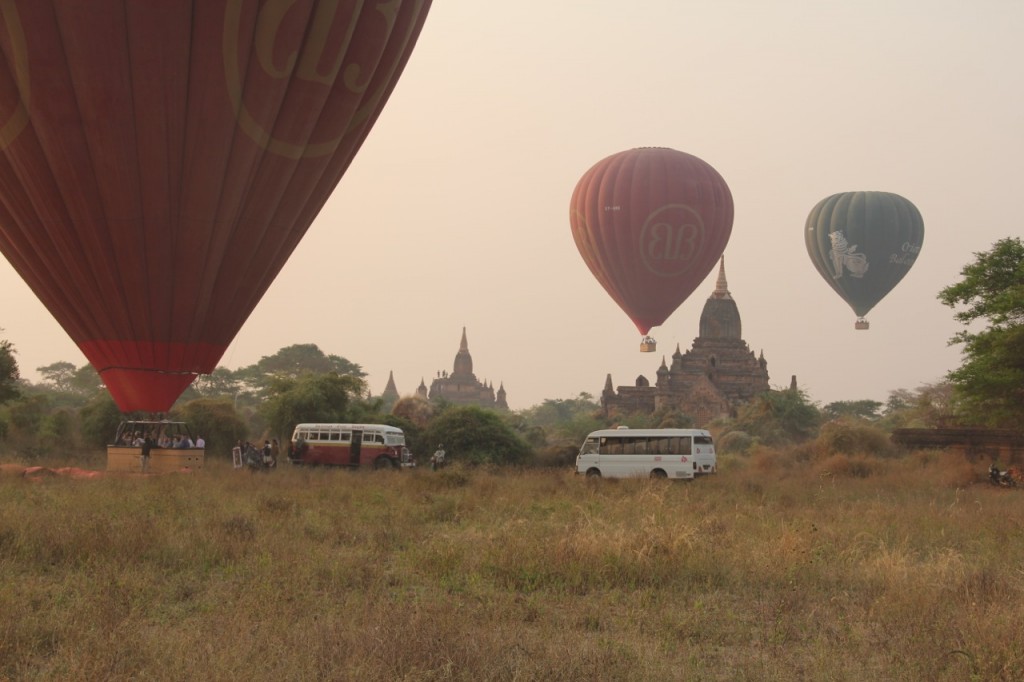 Floating over the temples at sunrise is another favorite tourist attraction. A 40-minute ride costs $350. Photo by Mary Jo Brooks/PBS NewsHour 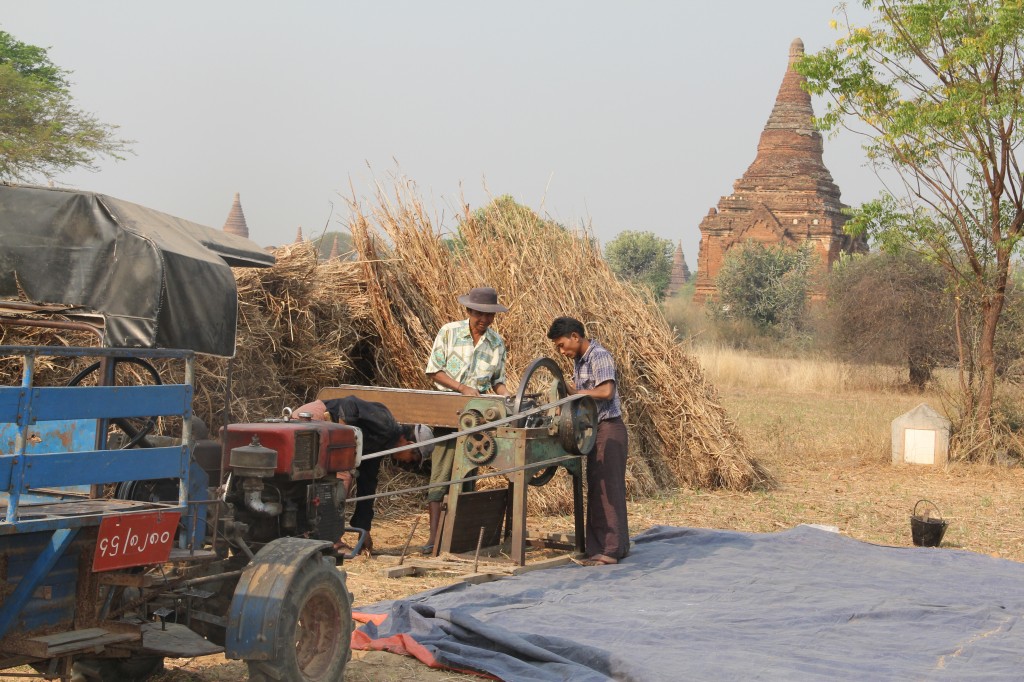 Villagers who formerly lived in the archeology zone of Bagan were moved by the government to a nearby town, in another effort to preserve the historic site. Farmers, however, still harvest their crops in the fields that surround the pagodas. Photo by Mary Jo Brooks/PBS NewsHour 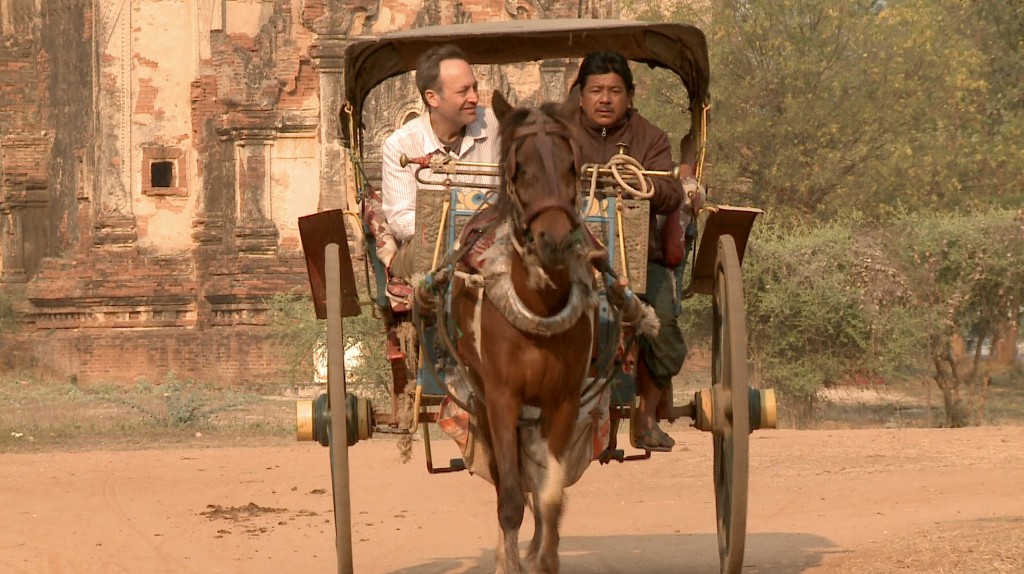 Fifty-year-old Myo Han used to be a farmer, but switched to carriage driving several years ago. He told the NewsHour’s Jeffrey Brown that he’s happier now because he makes much more money. The influx of tourists benefits his whole family. His oldest is also a carriage driver, his middle son works at a local hotel and his youngest will finish high school soon with the hope of becoming a tour guide. Photo by Mary Jo Brooks/PBS NewsHour

Tune in to the PBS NewsHour Tuesday to see chief arts correspondent Jeffrey Brown report on the impact of development on Myanmar’s architectural legacy. You can stream the NewsHour on our UStream channel at 6 p.m. EDT or check your local PBS listings.

This story is the first in a new series called, “Culture at Risk.” The series looks at foreign and domestic artifacts, artworks, buildings, or whole communities at risk from war, environmental damage, neglect and development.

Left: New political and economic freedoms in Myanmar have brought rapid changes to the city of Yangon. The population of the city is expected to quadruple over the next 25 years and developers are eager to build new skyscrapers to accommodate the influx. But some people are concerned that all of this new construction could threaten the city's architectural heritage and historical identity. Photo by Mary Jo Brooks/PBS NewsHour