When will Christo wrap the Arkansas River in 5.9 miles of silver fabric?

The 79-year-old — who goes by just one name — described the venture at New Mexico’s Albuquerque Museum on Aug. 22. The museum is exhibiting a collection of the artist’s drawings, photographs, sculptures and collages relating to Christo’s large-scale works. 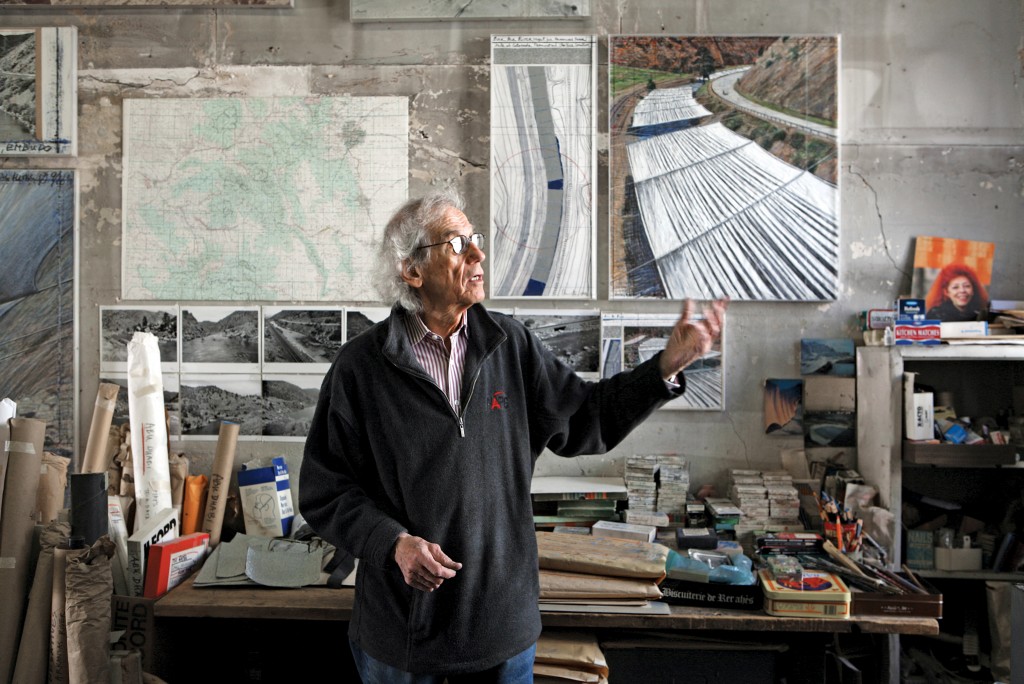 Christo in his studio with a preparatory collage for “Over The River.” Photo by Wolfgang Volz, © 2011 Christo

The Bulgarian-born artist and his late wife and collaborator, Jeanne-Claude, are known for their massive outdoor art installations, which have often sparked controversy over their scale and impact on the environment. This project is no exception.

For the two weeks that “Over the River” would be up, kayakers and rafters at the most popular whitewater rafting river in the U.S. will see the Rocky Mountains through industrial strength fabric. As the wind blows, motorists will see reflections of the bright blue western sky. 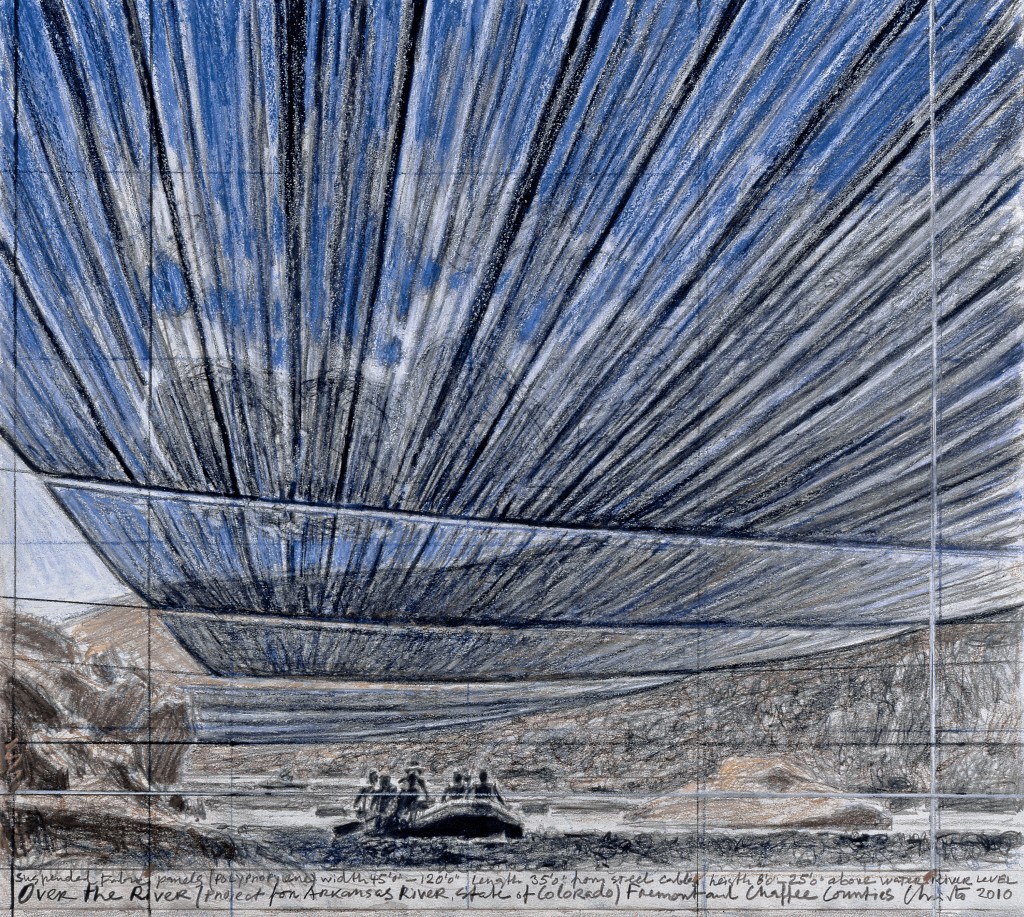 Over the River project for the Arkansas River in Colorado drawing. Photo by André Grossmann, © 2010 Christo

“It’s not like a normal sculpture,” Christo told a crowd of 400 at the museum. “You will need a full day to experience it.”

A special bus will take tourists to a vantage point where they can look down on the art and raft under it for five hours.

The idea came to Christo 37 years ago. He and his wife scouted more than 15,000 square miles of western wilderness investigating 89 rivers before selecting the Arkansas. 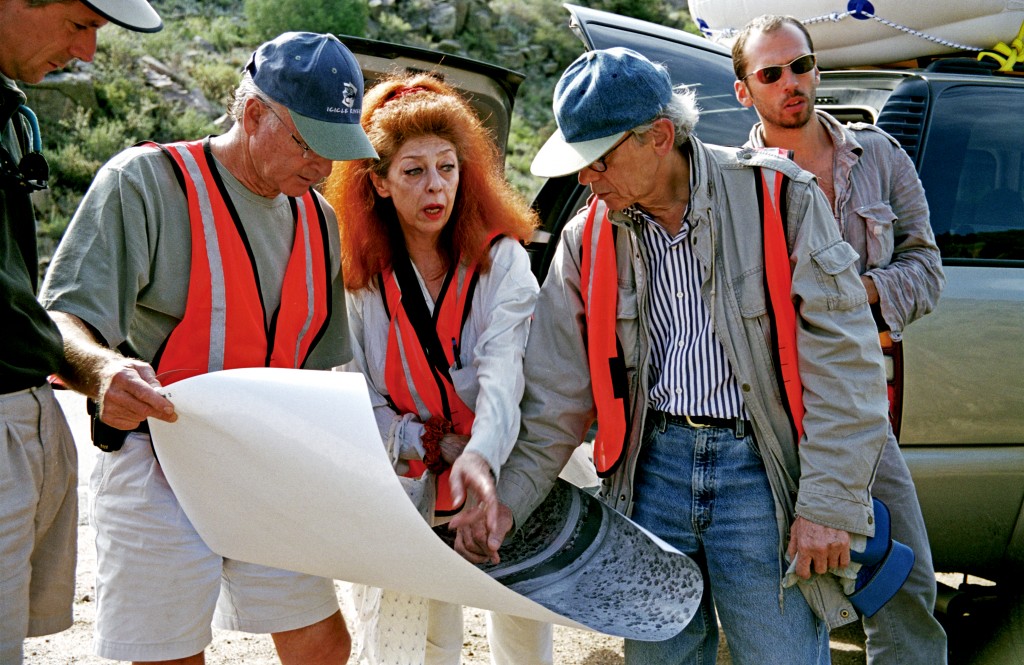 Christo, Jeanne-Claude and their team at work in the Arkansas River valley, Colorado, in August 2000. Photo by Wolfgang Volz, © 2000 Christo

“The hardest part is getting permission,” said Christo. “Everything in the world belongs to somebody.”

In this case, it’s mostly the federal government. Christo got a permit from the Department of Interior after filing an Environmental Impact Statement, usually reserved for major construction projects. Numerous other local, state and regional agencies had to approve, too. Still, a lawsuit filed by Rags Over the Arkansas River, or ROAR, a nonprofit created to preserve the headwaters of the Arkansas River, is pending against the Bureau of Land Management. Christo is confident he will be allowed to proceed but acknowledged it will be at least three years before the project is completed. For now, Associated Press reports that the project is on pause.

The artist isn’t fazed by the criticism. Christo noted it took 26 years of negotiations before he could erect the more than 7,500 saffron colored fabric panels that comprised “The Gates” in Central Park in 2005. 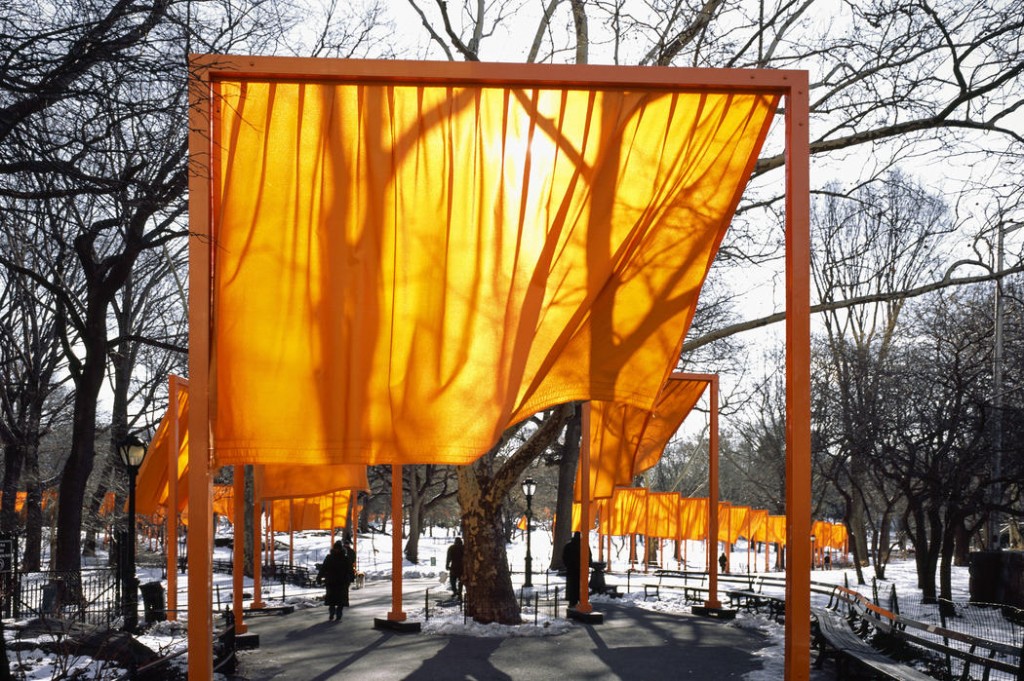 He said that $14 million has already been spent on “Over The River” before ever erecting a single panel. All costs are funded from the sale of Christo’s artwork. No public money is used, nor will any admission fees be charged.

Abroad, Christo has an even bigger vision: to create the world’s largest sculpture. In Abu Dhabi in the United Arab Emirates, he aims to use 410,000 oil barrels to create “The Mastaba,” nearly 500 feet high. 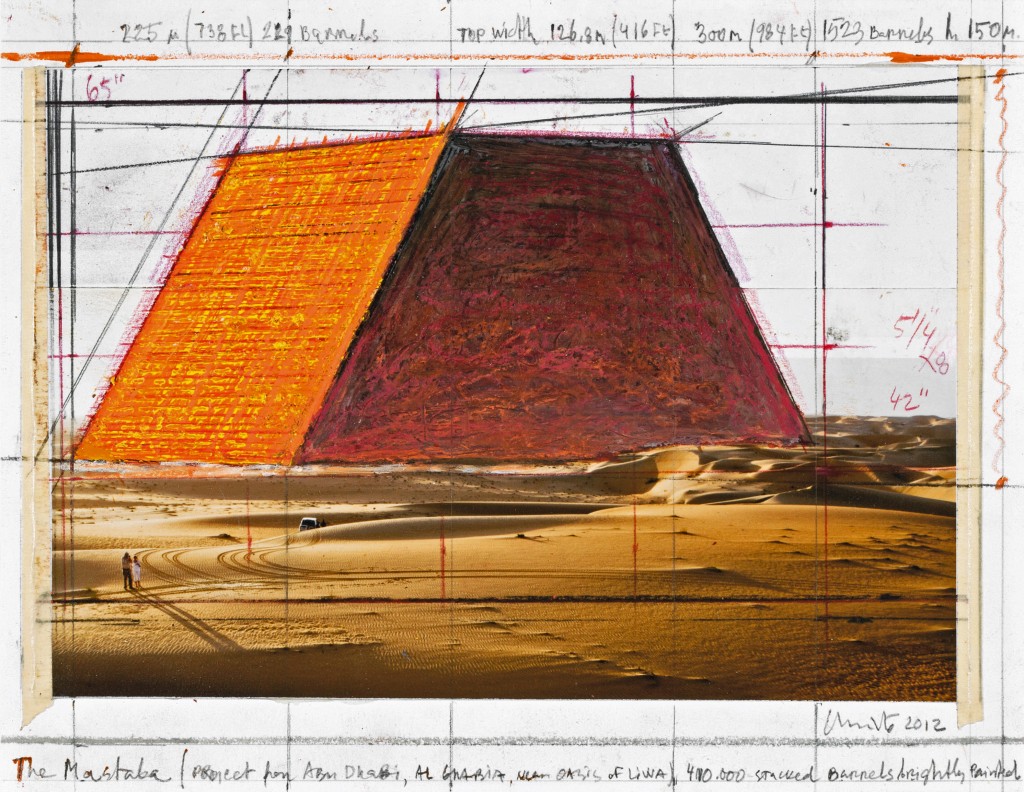 Drawing of the proposed project, “The Mastaba,” in Abu Dhabi. Photo by André Grossmann, © 2012 Christo. See more sketches and plans for “The Mastaba”.

A mastaba is an ancient Egyptian tomb made from mud bricks in a rectangular shape with sloping sides and a flat roof. Christo’s version will be constructed from 55-gallon steel barrels painted in a rainbow of colors that echo Islamic architecture. Unlike most earlier works, “The Mastaba” will be permanent.

The exhibit at the Albuquerque Museum continues through Sept. 14 before it moves to the Kimball Art Center in Park City, Utah, and on then on to St. Mary’s College Museum of Art in Moraga, California.