Why automation won’t put artists out of work just yet

An unexpected staff member has been greeting visitors to the Hirshhorn Museum in Washington, D.C. “Pepper” the robot is an interactive point of entry, who can tell museum-goers “a story” (by playing a video of one of the museum’s featured artists talking about their work), or provide a moment of fun. On a recent Saturday, one young child danced enthusiastically with the 4-foot-tall robot before giving it a hug.

“Reality’s going to be different for these kids,” a bemused onlooker said.

Pepper, part of a pilot program the Smithsonian launched in partnership with Softbank Robotics, doesn’t replace the human docents, said Kristi Delich, deputy director of the Office of Visitor Services. Programmed with simple information about various artists and subjects in the museums, the machines aren’t likely to give full-fledged tours of the museum anytime soon.

Creative fields are often held up as careers that are least threatened by the advancement of artificial intelligence. While a computer can automate the work of cashiers and factory workers, imagination and the desire to create beauty or meaning feel like exclusively human traits.

But computers and robots have already proven they can contribute to and change the arts, especially in commercial ways.

In 2016, a novel written entirely by AI was shortlisted for a national literary prize in Japan. In October, an AI-generated piece of art sold for $432,500 at a Christie’s auction. Music streaming services now rely heavily on algorithms to curate playlists that will keep users listening, and data is influencing how artists compose for a mass audience.

But there is a downside to having large amounts of data at our fingertips, according to Christopher Steiner, author of “Automate This: How Algorithms Came to Rule Our World.” Automation is “limiting creativity and affecting how creative people think,” he said.

That translates to our workplaces, too. As technology makes the problem-solving process easier on employees, our understanding of each step involved in getting a task done grows less sophisticated. Even in less creative fields like sales, said Steiner, software like Salesforce has transformed the way that people structure their days — they no longer arrange their own calls and follow-ups because an automated tool can do it for them. In the music industry, artists now write and produce music with the help of algorithms that have mastered the exact formula of a pop hit.

But algorithms, said Steiner, take away some of the “nuance” and “grit” of the creative process, leading to what some critics would say are less interesting works of art. And the sense of human connection in those interactions begins to fade.

“They don’t have heart yet, and that’s what we’re working towards.”

Steiner points to the rock band Greta Van Fleet, which the music site Pitchfork recently compared to a vampire “there to catch the runoff of original classic rock” by using a data-driven business model.

Any technical disadvantage human artists have to robots may actually give them the upper hand in the long run, said Heather McGowan, a business strategist who focuses on the future of work.

Artist Pindar Van Arman says the robots he designed to paint pictures can do some things better than humans. His machines create aesthetic works based off pictures of brushstrokes in front of them, can render portraits and mix colors very well.

But he says there are some qualities they could never replicate, like creativity. “My daughter started painting a pink Snoopy,” he explained. “She said, ‘I can paint Snoopy pink because sometimes poodles have pink hair.’ That’s so much more sophisticated than any of my robots … my robots don’t know how to go abstract like that.” 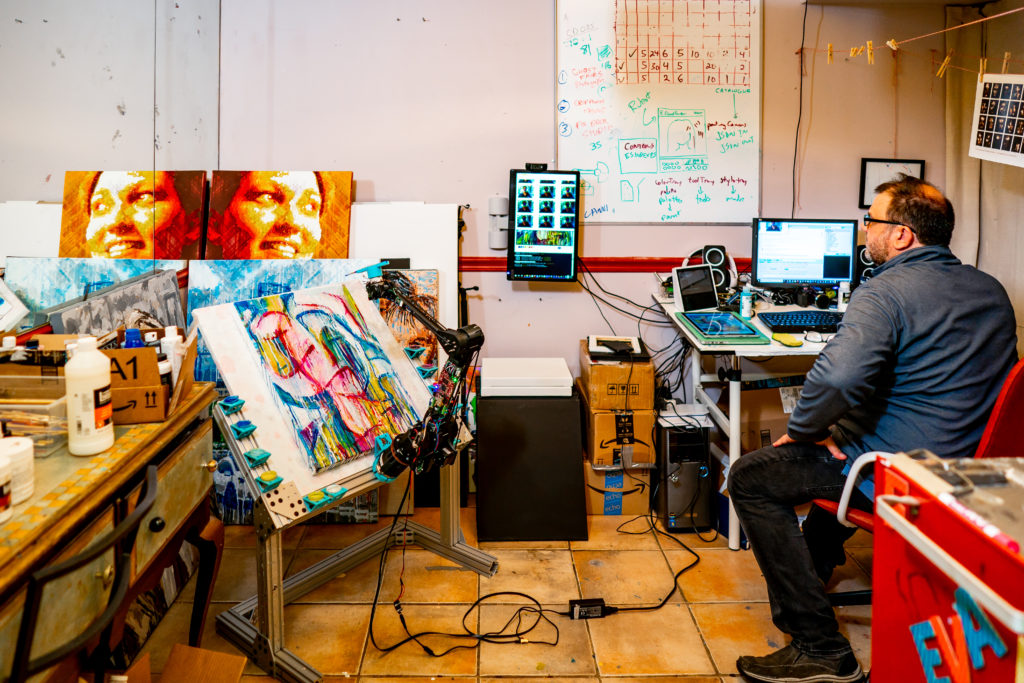 “They don’t have heart yet, and that’s what we’re working towards,” he said.

Just look at Emma Sulkowicz, he said, referring to a Columbia University student who carried a mattress across her back for weeks as a statement about the school’s lack of response to her report of being sexually assaulted.

“That is crazy creative, a message from one human to another. When a robot has something like that to say, that will be art,” Van Arman said.

Back at the Hirshhorn Museum in Washington, D.C., Rafael Lozano-Hemmer’s Pulse series harnesses technology to create an art experience that is driven by human biology. As you walk through the gallery, you’re actually part of the art. Lights hanging from the ceiling are synced to blink with your heart rate, detected by sensors. In the next room, microscopic images of visitors’ fingerprints are projected onto the wall.

AI art could soon be a significant part of the creative market. The paintings produced by Van Arman’s robots have been commissioned for upwards of $4,000, and Paris’ Grand Palais museum recently hosted an art exhibition featuring only works created by computers.

But artists like Van Arman don’t see AI as a threat — quite the opposite.

“I hope in the near future AI can replace all the tedious stuff and leave us to only creative endeavors,” said the artist.

If a robot could prepare his paints or paint the background on a canvas — work that many prominent artists have historically relegated to anonymous human studio assistants — he said he would have more time to focus on “finding the human angle, making the story connect with someone.”

Or as McGowan put it, “It’s not us versus the machines, rather, it’s us with the machines.”